Benjamin Disraeli's  declaration “There are three kinds of lies: lies, damned lies, and statistics" is perfectly embodied in the  Manhattan  Institute’s report "New Energy Economy”: An Exercise in Magical Thinking by Mark  P.  Mills that claims, the physics of energy illustrates why there is no possibility that the world is undergoing—or can undergo—a near-term transition to a “new energy economy”.

In support of this claim he uses the following graphic sourced from “Lazard’s Levelized Cost of Energy Analysis” 2018 that shows that over the course of 30 years one million dollars’ worth of shale natural gas hardware will produce 5.8 times more electricity than the same equivalent of wind turbines and 8 times the same equivalent of  solar arrays. 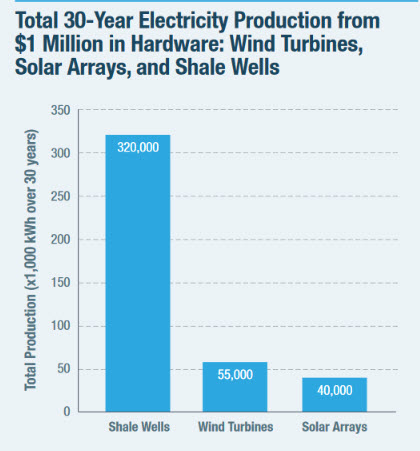 Mr. Mills has the effrontery to claim his report is based on science whereas he cherry-picks the renewables with the least capacity compared to those with the highest per the following table from the MIT master’s thesis of Shylesh Muralidharan. 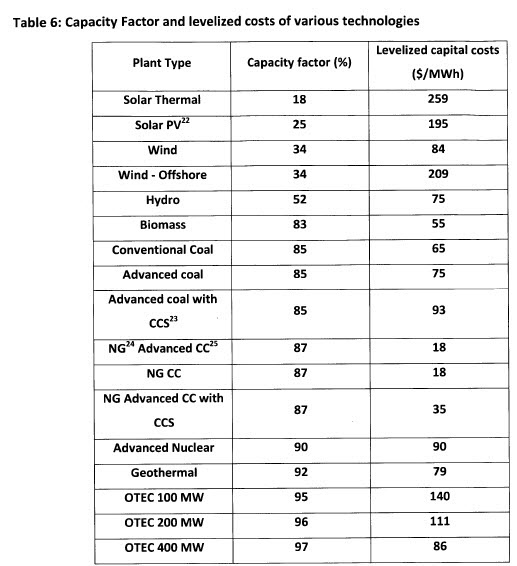 What’s more, the Muralidharan table is based on conventional OTEC, whereas Negative-CO2-Emissions ocean thermal energy conversion is 33 percent cheaper and declines 22 percent with each doubling of plant size per the following table.

By mixing Tables 1 and 3 you come to the levelized cost of the comparative infrastructures, which makes shale gas look good in comparison to the renewable alternatives but overlooks two things.

The first is fossil fuel subsidies, and the second is the environmental cost of doing business which compounds with each additional degree of warming.

These can be direct funding and tax giveaways, subsidized loans, and guarantees at favorable rates, price controls, government contributions like land and water at below-market rates, grants in aid for research and development, and the like.

The IMF found this month that the indirect U.S. subsidies for coal, oil, and gas reached $649 billion in 2015 or about 8.3 percent more than U.S. military spending for the same year. A figure that should make any true blue conservative queasy but not apparently the fossil fuel mob.

The EIA estimates that U.S. energy expenditures for 2015 totaled $1.127 trillion.

For the sake of argument, this article uses only the U.S. fossil fuel subsidies, which aren’t the same as The Economics of Ecosystems and Biodiversity environmental cost of business, which was reported in 2013 to be another $4.7 trillion a year or about 78 percent higher than the base cost of energy.

The EIA estimates that the U.S. has 2,459 trillion cubic feet (Tcf) of technically recoverable gas or about 80 years’ worth.

Burning all of this would ensure temperatures would be at least 3 degrees higher than pre-industrial by the end of this century and thus the environmental premium that all sources of energy are currently saddled with would be three times higher for shale gas as indicated in Table 5.

The Brookings Institute confirms The Real Costs of U.S. Energy is 170 per higher than the base cost and includes a 3.4 cent per Kilowatt hour adverse health impact and a 2.2 cent social cost related to climate change.

This social cost includes things like sea level rise that could cost the world $14 trillion a year by 2100,  global fisheries loses of $10 billion a year by 2050, the rising cost of hurricanes  and ocean plastic pollution costing the world $2.5 trillion a year all of which are uniquely mitigated by OTEC that merits the 25 percent environmental bonus plugged into Table 5.

So, instead of a new energy economy based on Negative-CO2-Emissions ocean thermal energy conversion being an exercise in magical thinking as Mr. Mills claims, it is claims for fracked gas and by extension all fossil fuels that are Barnumesque, with apologies to P. T. Barnum who never actually said, “There's a sucker born every minute".

Sadly, fossil fuel apologists are just crony capitalist or communists according to your political persuasion and nothing more than mouthpieces for the oligarchs.

For us plain folks, we need and can have energy that is cheaper than fossil fuels that can turn back the clock on global warming instead of making it run faster and faster towards our demise.

It is amazing that you write this under the guise of science. I have read the IMF report and there is nothing scientific about it. One of the largest components of "fossil fuel subsidies" is claimed to be charges NOT made to compensate...society? WOrld government?...for the costs of carbon in the atmosphere. Money not spent is not a subsidy. There is no pot of money as implied by these pseudo-analyses.

The "fossil fuel crowd" keeps you alive every day and fuels your extravagant western lifestyle. If you choose to stop subsidizing it, I presume you have stopped flying, as an absolute bare minimum, because no one EVER needs to fly, do they?

It will be great to get off fossil fuels some day, but in proper order - get off coal, then oil, then natural gas - but that is many many decades away, and, obviously, lumping all fossil fuels together is the mark of an intractable zealot and not anyone interested in solutions.