It's Time to Make Carbon Negative Buildings the Norm

Climate change has entered into a new phase that could last generations even if governments act to curb human activity that leads to global warming. But the Habitat III New Urban Agenda agreed ten days ago offers a chance for the built environment to become negative carbon. Buildings can now begin to withdraw carbon dioxide from the atmosphere. This article gives a few tips on how.

Globally averaged concentration of carbon dioxide in the atmosphere reached the symbolic and significant milestone of 400 parts per million for the first time in 2015 and surged again to new records in 2016 on the back of the very powerful El Niño event, according to a new bulletin issued last week from the World Meteorological Organization’s annual Greenhouse Gas Bulletin. 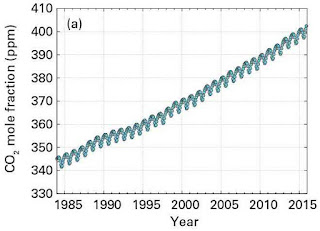 “The year 2015 ushered in a new era of optimism and climate action with the Paris climate change agreement. But it will also make history as marking a new era of climate change reality with record high greenhouse gas concentrations,” WMO Secretary-General Petteri Taalas said in a statement.

The data “predicts that carbon dioxide concentrations will stay above 400 ppm for the whole of 2016 and not dip below that level for many generations,” the WMO said. “The El Niño event has disappeared. Climate change has not. Without tackling carbon dioxide emissions, we cannot tackle climate change and keep temperature increases to below 2oC above the pre-industrial era. It is therefore of the utmost importance that the that the Paris agreement does indeed enter into force well ahead of schedule on 4 November and that we fast-track its implementation.”

The El Niño event triggered droughts in tropical regions and reduced the capacity of “sinks” like forests, vegetation and the oceans to absorb CO2. Besides this it also led to an increase in CO2 emissions from forest fires. According to the Global Fire Emission Database, CO2 emissions in Equatorial Asia – where there were serious forest fires in Indonesia in August-September 2015 – were more than twice as high as the 1997-2015 average.

But there’s hope. Habitat III, which took place in Quito last week with around 36,000 people attending from 167 different countries, adopted the New Urban Agenda which, amongst other things, urges cities to tackle climate change.

Joan Clos, the Executive Director of the UN Human Settlements Programme (UN-Habitat), called the Agenda “a common roadmap for the 20 years to come” at the closing plenary of the conference.

Cities are both the source of most of the world’s carbon-dioxide emissions and the place where the most impactful interventions can occur — to reduce automobile driving, improve energy-efficiency in buildings and switch to renewable energy sources, among other opportunities.

“By making the Paris Agreement one of its antecedents and quoting its long-term goal, the New Urban Agenda is acknowledging the climate challenge in cities, and putting climate action at the core of urban policies at national and local levels — and that’s a good thing,” said Mark Watts, executive director of the C40 Cities Climate Leadership Group.

The agenda does not bind Member States or city governments to specific targets or goals, but is rather a “shared vision” that set standards for transforming urban areas into safer, resilient and more sustainable places, based on better planning and development.

The Quito Implementation Plan is now set up to support the outcomes of Habitat III and the New Urban Agenda.

Amongst the potential strategies to help with the Quito implementation plan is for building specifiers, developers and architects to generate buildings which are at least zero carbon on balance, when totalling the carbon impacts of materials, construction, use and demolition. But what does this mean?

Some features of zero or carbon negative buildings are to:

Such a building could, over its lifetime, become zero carbon, or even negative carbon by generating enough power to more than make up for the fossil fuels it has used and storing atmospheric carbon in its structure.

From a planning angle, different neighbourhood layouts for developments are appropriate depending on the regional climate as shown in these figures:

On average the carbon impact of the construction of conventional buildings is between 10 and 20% of their use during their lifetime. But it is self-defeating to construct a zero carbon building with materials that cause high carbon emissions in their manufacture.

Conversely it is ideal to use materials which lock up atmospheric carbon, for situations where well-performing and suitable alternatives exist, usually made from natural cellulose-based materials. (Plants absorb atmospheric carbon while growing and ‘lock it up’ in their mass.)

Steel is a possible exception, despite its high embodied carbon, as it is long-lasting, but many large and high-rise structures are now being made using frames made of timber products.

‘Natural’, ‘green’, ‘bio’ or ‘renewable’ building materials can be classed together as ‘cellulose-based’. Amongst their benefits are that they:

They are also biodegradable or easily recycled at the end of the building’s life and may support local agroforestry.

Sustainably sourced timber and timber products specially designed for structural use must be specified. These include glued laminated timber (‘glulam’) and Cross-Laminated Timber (CLT).

The tallest building in the world made with timber frame is 14 storeys high and is in Bergen, Norway. It uses metre-thick columns of glulam and CLT, plus two concrete decks above the 5th and 10th floors. See the video below.

Glulam can produce columns, beams and curved, arched shapes and has a much lower embodied energy than reinforced concrete and steel, although higher than solid timber.

CLT is an engineered timber product with good structural properties and low environmental impact able to provide dry, fast onsite construction, with good potential for airtightness and a robust wall and floor structure suitable for most finishes internally and externally. It requires only limited new site skills and can be assembled without the use of adhesives using mechanical fixing. Its low weight means that a high degree of offsite manufacture is possible.

Other useful timber products include:

Other natural carbon- negative materials currently used in construction include:

For reporting purposes, it may be useful to report the carbon storage capacity of a building, to add to the carbon saved from using renewable energy to heat and power it. For buildings a web-based calculator like the one on this page may be used.

Phase shifting Phase shifting is another useful tool for building designers. It denotes the time taken for an extreme external temperature to reach the interior, travelling through the building envelope.

The aim of passive cooling in hot, non-humid areas is to have a phase shift of 12 hours, so that the midday heat only reaches the interior in the middle of the night. With good amplitude dampening, its effect will also be very much moderated.

Some of the stored energy in the fabric is thus automatically transferred back outside, ensuring that temperature fluctuations and extremes on the inside are much less than outdoors.

There is now no excuse for building specifiers and designers not to give us at least zero carbon buildings.

David Thorpe is the author of: