It's the intermittence stupid 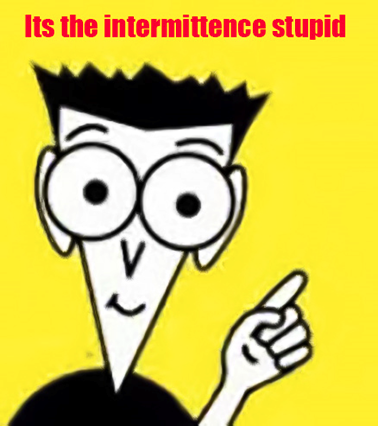 Michael Moore’s documentary, Planet of the Humans, shows we are losing the battle to stop climate change because our “leaders” have sold out the green movement to unscrupulous, monied, interests.

In the film's introduction Moore says, “in the midst of a human-caused extinction event, the environmental movement’s answer is to push for techno-fixes and band-aids. It's too little, too late.”

The problem is, Moore and his director Jeff Gibbs, who professes to be a lifelong environmentalist, have ignored the techno-fix that can sustain mankind at current population levels for at least the next three thousand years. Which is as a good an answer as any to the question posed by Gibbs in the opening frames of the movie? How long do you think humans have?

The film shows how ersatz environmentalists have fallen for the “green” illusions of wind, solar, biomass and electric cars while they have ignored the lessons of physics and economics.

The physics says the energy of global warming can be converted to the energy the planet needs to supply the demands for water, water, food, surface cooling, sea level mitigation, ocean acidity neutralization, carbon sequestration, poverty reduction, terrorism and war mitigation, disease eradication, learning, democracy and depopulation. And while wind and solar are intermittent as the dummy above and the movie points out, the oceans are the largest collector of solar energy and are thermally stratified so, heat gathered at the surface can be moved through a heat engine to produce work with the balance deposited into the massive cold reservoir of the ocean depths.

In fact, solar energy captured by the ocean is the reverse of intermittent because the portion of the energy not converted by thermodynamic geoengineering returns from a depth of 1,000 meters at a rate of 4 meters a year for the first 900 meters and 1 meter a day the last 100 meters, so it is back at the surface in about 226 years where it can be recycled.

The initial conversion of the existing load of warming heat can produce over twice as much as energy is currently being derived from fossil fuels and after the 226 years of global warming respite, the returning heat can be converted economically on either a straight line or declining balance basis. Which in the latter case extends the life of the energy of warming out to 11,000 years.

Columbia’s Earth Institute  points out, “the notion that all biomass results in a 100 percent reduction of carbon emissions is wrong.” And, “cutting or clearing forests for energy, either to burn trees or to plant energy crops, releases carbon into the atmosphere that would have been sequestered had the trees remained untouched, and the regrowing and thus recapture of carbon can take decades or even a century. Moreover, carbon is emitted in the combustion process, resulting in a net increase of CO2.”

Burning it is folly.

No amount of batteries are going to save us, warns director Jeff Gibbs, with respect to electric cars, but fuel cells can be that salvation.

The current reserve of lithium for electric car batteries is 15 million tonnes, whereas forsterite or olivine (Mg2SiO4) is the most abundant mineral in the mantle above a depth of about 400 km. In combination with carbonic acid and electricity derived from the conversion of the heat of warming, an electrochemical process can produce hydrogen, oxygen, sand and ocean acidity neutralizing magnesium bicarbonate while sequestering carbon dioxide in accordance with the formula:

Although the movie downplays hydrogen because it is mostly derived from hydrocarbons, mainly natural gas, that leaves CO2 as the by-product of production, the fossil fuel industry isn’t the only game in town.

Hydrogen production can and should be completely simpatico with the environment using electrolysis or the above electorchemical process.

Although raw materials are being stretch to the limit by current population levels, thermodynamic geoengineering uses the most abundant energy source, the most abundant mineral and repurposes the sand from the electrochemical process into the concrete used in much of the infrastructure.

Although the unscrupulous may have given “green” a black eye, fundamental physics and economics are available to those interested in the truth about our prospects.