The universal solution to global warming!

Economists posit that economies of scale allow businesses to maximize profits by reducing the average costs per unit of output.

The scale of some enterprise is too great however for any business or economic entity to unravel.  Or for that matter any single nation or even a group of nations like the G7.

Climate change is a problem that will require a global effort to resolve. But that solution can be universally profitable.

It is the problem Reagan and Gorbachev should have been contemplating during their 1985 Geneva Summit, rather than “Alien Invasion” that  they agreed was capable of putting the Cold War on hold.

Three years later, James Hansen, warned Congress that human emissions of greenhouse gases were cooking the planet. And last year he warned he expects the rate of global warming to double in the next 20 years.

In nature, pound for pound large animals burn less energy and require less food than smaller ones. But large animals get that way through a process of evolution.

Stanford researchers have shown that over the course of the last 542 million years, the Phanerozoic Eon, the mean size of marine animals, some of the largest animals that have ever existed, has increased 150-fold.

But we don’t have 542 million years to scale to the solution required.

When it comes to energy and size, hurricanes are one of the largest forces in Nature.  On average they release 600 terawatts of energy, with a quarter of that in the form of wind, and the balance as the latent heat stored and released as water evaporates and condenses into rain per the following graphic.

On average 86 of these, hurricanes, cyclones, or typhoons, depending on where one lives, are produced annually.

It takes sea water temperatures of at least 26 degrees Celsius to a depth of 50 meters to power these storms as well as the Coriolis effect.

They do not occur within the Inter Tropical Convergence Zone, the hottest region of the planet, where the North and South Trade winds come together and often produce vigorous thunderstorms over a large area.

A typical hurricane lasts anywhere from 12 to 24 hours, but they can sustain themselves for as long as a month, as Hurricane John demonstrated in 1994.

The International Best Track Archive for Climate Stewardship (IBTrACS), a global inventory of tropical cyclones first made available in late 2008 shows the following tracks and categories of cyclonic activity the past 14 years. 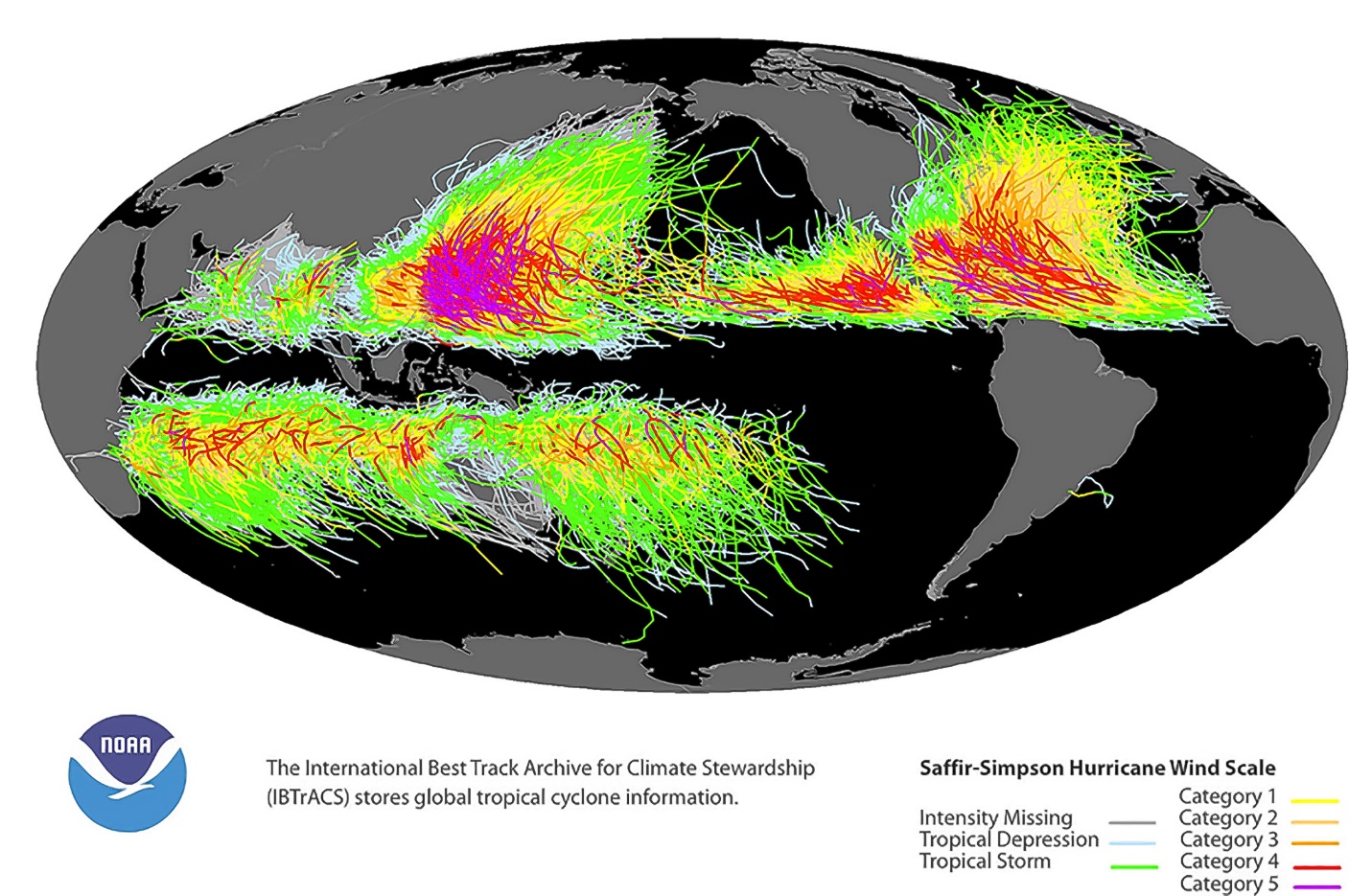 These storms are seasonal per the following graphic and accordingly intermittent like wind and solar. 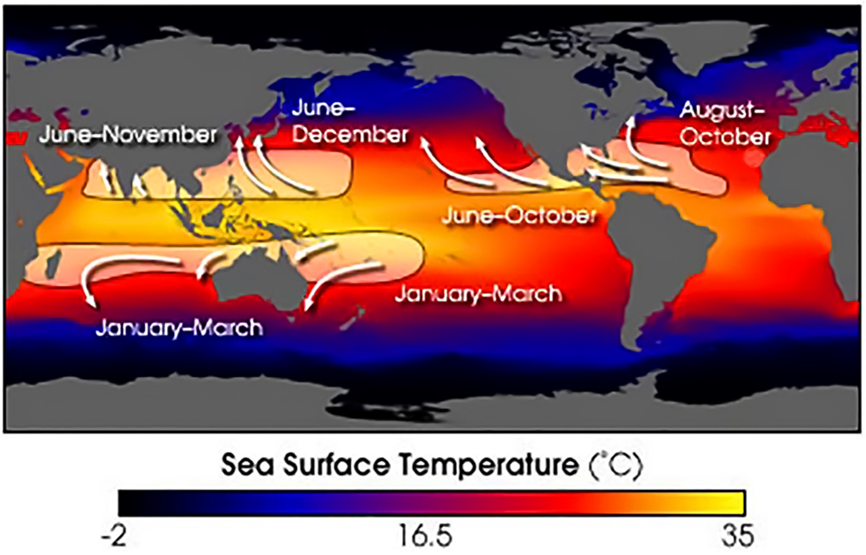 In order to harness the power of these storms, as the American astrophysicist, author, and science communicator, Neil deGrasse Tyson, has suggested we should be doing, we could build in costly redundancy like with wind and solar, or systems that move with the seasons so they can harvest the power of hurricanes to power the cities of tomorrow.

"I’m tired of looking at photos of countless thousands of cars exiting a city, because a hurricane is coming. Where are the engineers and scientists saying, you know, instead of running away from the city that’s about to be destroyed by this hurricane, let me figure out a way to tap the cyclonic energy of this hurricane to drive the power needs of the city that it’s otherwise going to be destroyed?" he probed in a 2017 “The Today Show” interview.

This same argument has to be expanded to include global warming.

We  should be figuring how to tap this excess energy, which is about twice the equivalent of an average hurricane.

The way to do that is to break the problem down into manageable bites.

The following graphic from the paper Strong enhancement of chlorophyll a concentration by a weak typhoon shows how the sea surface temperature decreased by as much as 7°C when Typhoon struck the Philippines November 19, 2007 and how that cooling persisted for at least the next 3 weeks.

Hagibis was a category-1 typhoon that moved slowly in a “V”-type track that passed over its middle twice and stayed for five days. It was distinctive in that it remained in a confined area for so long and produced significant cooling. As well as a strong phytoplankton bloom induced by  higher upwelling velocity in the mixed layer.

It is suggested phytoplankton blooms like Hagibis produced, can impact climate change by reducing atmospheric CO2 levels when the phytoplankton die and sink into the deep ocean. But as the following graphic from the paper The global ocean size spectrum from bacteria to whales demonstrates, both in terms of biomass as well as body mass, there are far more CO2 generates in the oceans than CO2 consumers. 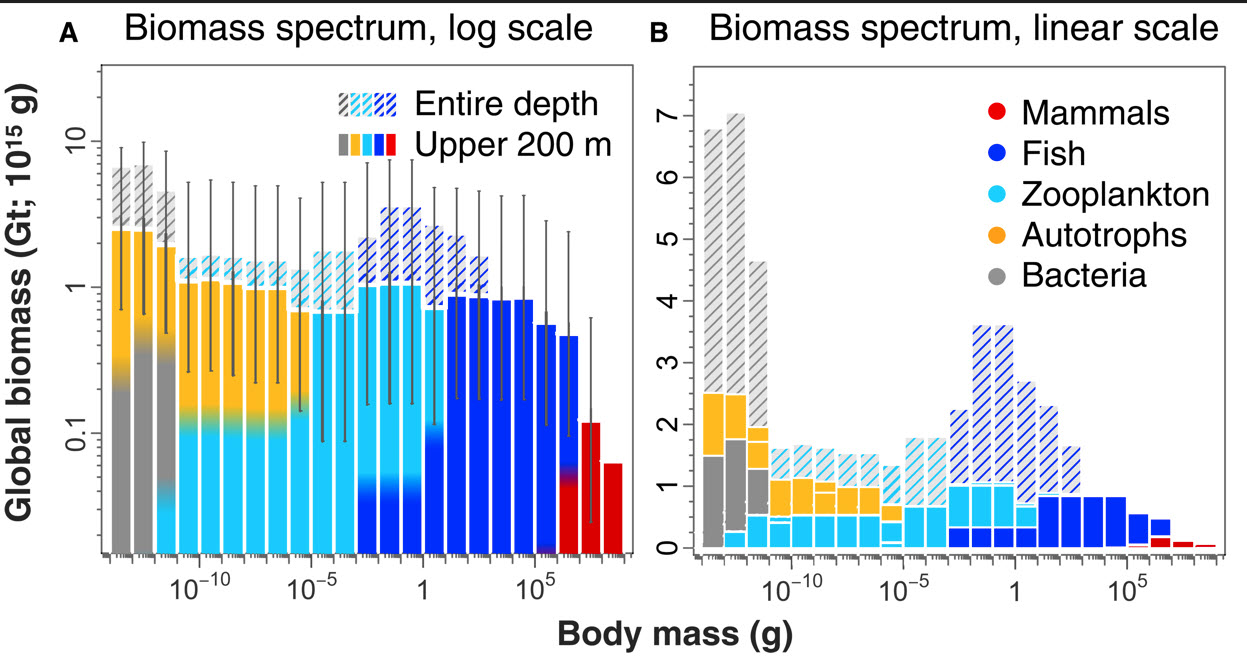 It  is hard therefore to see how the CO2 consumers can possibly save our climate bacon.

The measurable disturbance of storms like Hagibis reaches only to a depth of about 90 meters. And some surface cooling is effected by churning the mixed layer this way, but neither surface heat mixing, nor phytoplankton husbandry scratch the surface of the ocean’s potential to cool the surface or remove CO2 from the atmosphere.

By far, most of the cooling of the surface realized by storms like Hagibis comes from evaporation that is a surface effect. As shown above, it takes surface waters at least 50 meters deep, at a temperature of at least 26 degrees Celsius to produce a Category 1 or greater storm, but a significant portion of the top 13 meters of the surface laden with “hurricane fuel” can be “boiled”, which is far faster than evaporation with a low-boiling-point working fluid like ammonia or CO2, in Thermodynamic Geoengineering (TG) heat exchangers (in grey) like those of the 1-gigawatt(GW) platform depicted below that are active through the total thickness of the working fluid. 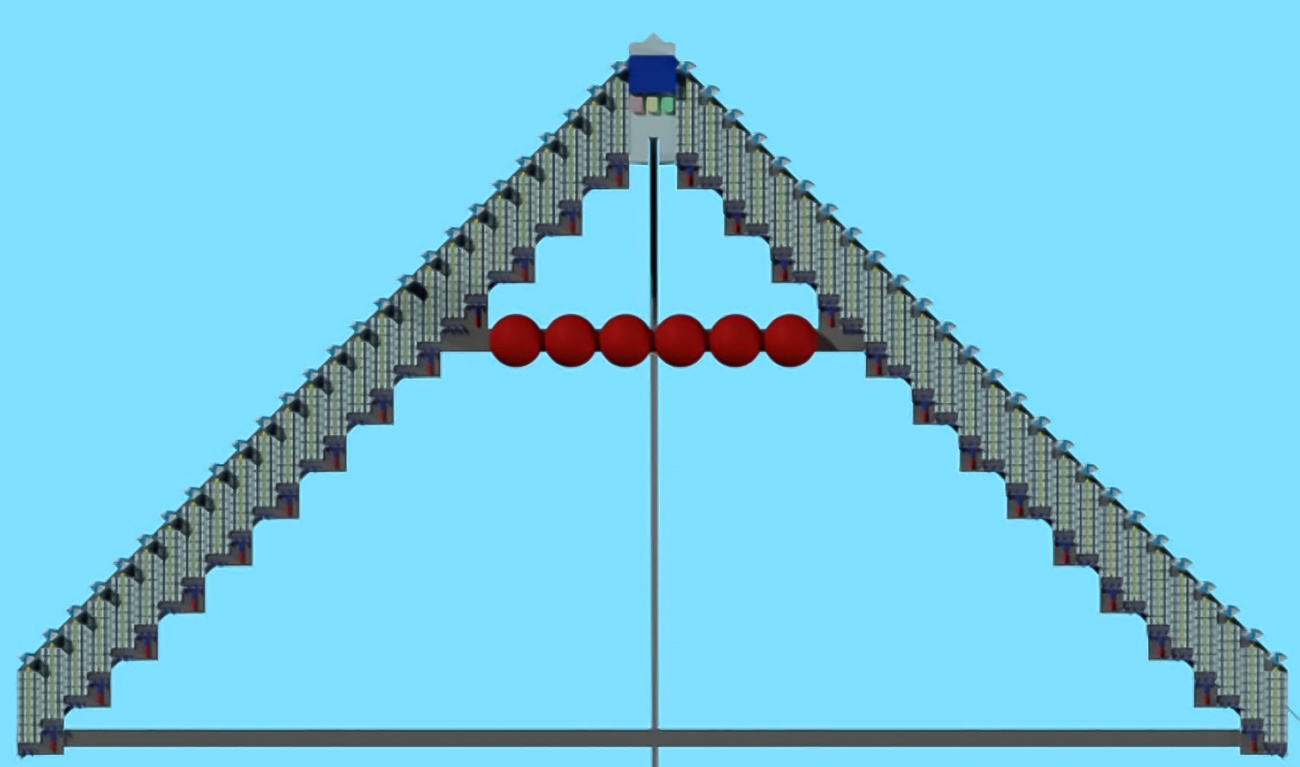 These platforms remove 13 GW of heat from the surface for every GW of power generated and relocate the removed heat to a depth of 1,000 meters from where it will return in about 226 years at which time it can be recycled.

In a hurricane, the atmospheric pressures falls when water vapor condenses in a rising column of air and releases energy, or latent heat, into the area of the tropical disturbance. The heat boosts the buoyancy of the air accelerating its rise. To compensate for the rising air, surrounding air sinks towards the surface, and is compressed by the weight of the air above it increasing its temperature.  The pressure rises at the top of the warming air pushes it outward. Because there is now less air in the layer, the weight of the entire layer is less, and the pressure at the ocean surface drops. The drop in pressure draws in more air at the surface, and this air converges near the center of the storm to form more clouds.

The latent heat of evaporation of water is 2,260  kilojoule/kilogram. The surface area of the TG heat exchanger is about 27,000 m2 and according to the Engineering Toolbox at a temperature of 20oC this area would evaporate 1.26 kilograms of water/second and remove 3092 kilowatts of heat.

For each 1°C of warming, saturated air contains 7 percent more water vapor on average. So, at 30oC, the initial surface temperature of Typhoon Hagibis and most other such storms, the rate of evaporation and heat removal would be twice as great for a total of about 2.52 kilograms of water/second and 6184 kilowatts of heat.

According to Vega and Michaelis in their paper First Generation 50 MW OTEC Plantship for the Production of Electricity and Desalinated Water a 50 MW closed cycle plant would process  2,750 kg/s of ammonia working fluid.

Whereas hurricanes boost the buoyancy of air making it move away from the surface, the boiling of a low-boiling-point working fluid produces a vapor pressure that allows the vapor to flow in the opposite direction -against gravity - in the confines of the TG heat pipe, through a turbine to produce work and into deep water where the vapor condenses back into a fluid that can be pump backed to the surface to complete the work cycle.

Whereas, in a hurricane the weight of air decreases as it rises, the pressure in a 1000 meter long heat pipe increases due to the weight of the vapor above, increasing the temperature at the bottom by about 5oC. Which is a significant efficiency boost for these systems over conventional OTEC.

With this boost, plus the fact the heat exchangers are both contiguous to their heat and cold water sources, TG plants are about 2.5 times more efficient than conventional OTEC plants.

The economists are right about economies of scale in an industrial setting, but global warming and hurricanes are too enormous to be tackled as a singularity.

OTEC isn’t economically viable in plant sizes less than 100 megawatts. But they become increasingly more viable at a rate of 22% for every doubling of their size. At gigawatt scale they are the cheapest energy extant, cool the surface 12,000 times more efficiently than hurricanes and use the least real estate.

According to Suncylopedia the total land required for a 1 MW of solar PV power is 4 acres, 16,000 m2 so, TG is about 600 times more economical than photovoltaics for real estate. Which is why 1 GW of TG power at a cost of $0.0080/kWh is 1.4 – 3.8 times cheaper that the next lowest auction price for energy ever recorded.

To industrialize this energy, it will take about 31,000 1-GW TG plants to convert the heat of global warming to work and to sequester the balance of the heat in the deep ocean for the next 226 years.

Each of these plants will be money makers and will help reverse the migration of the 25% of atmospheric CO2 that has moved out of the ocean into the atmosphere as the oceans have warmed and mitigates every other consequence of climate change.

In short, Thermodynamic Geoengineering is the universal solution to global warming!

It is the only energy source big enough to get the job done yet is small enough to be affordable as the technology scales, exponentially, to its full potential.