Renewables’ resilience is driven by the electricity sector

In sharp contrast to all other fuels, renewables used for generating electricity will grow by almost 7% in 2020. Global energy demand is set to decline 5% – but long-term contracts, priority access to the grid and continuous installation of new plants are all underpinning strong growth in renewable electricity. This more than compensates for declines in bioenergy for industry and biofuels for transport – mostly the result of lower economic activity. The net result is an overall increase of 1% in renewable energy demand in 2020.
Despite looming economic uncertainties, investor appetite for renewables remains strong. From January to October 2020, auctioned renewable capacity was 15% higher than for the same period last year, a new record. At the same time, the shares of publicly listed renewable equipment manufacturers and project developers have been outperforming most major stock market indices and the overall energy sector. This is thanks to expectations of healthy business growth and finances over the medium term. In October 2020, shares of solar companies worldwide had more than doubled in value from December 2019. 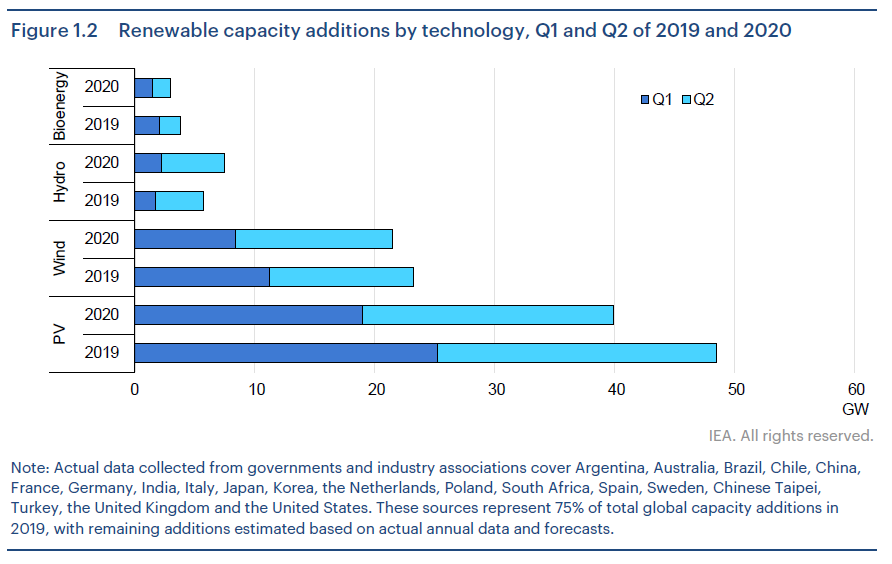 Driven by China and the United States, net installed renewable capacity will grow by nearly 4% globally in 2020, reaching almost 200 GW. Higher additions of wind and hydropower are taking global renewable capacity additions to a new record this year, accounting for almost 90% of the increase in total power capacity worldwide. Solar PV growth is expected to remain stable as a faster expansion of utility-scale projects compensates for the decline in rooftop additions resulting from individuals and companies reprioritising investments. Wind and solar PV additions are set to jump by 30% in both the People’s Republic of China (“China”) and the United States as developers rush to complete projects before changes in policy take effect. The renewables industry has adapted quickly to the challenges of the Covid crisis.

We have revised the IEA forecast for global renewable capacity additions in 2020 upwards by 18% from our previous update in May. Supply chain disruptions and construction delays slowed the progress of renewable energy projects in the first six months of 2020. However, construction of plants and manufacturing activity ramped up again quickly, and logistical challenges have been mostly resolved with the easing of cross-border restrictions since mid-May. Our new database for monthly capacity additions shows that they have exceeded previous expectations through September, pointing to a faster recovery in Europe, the United States and China. 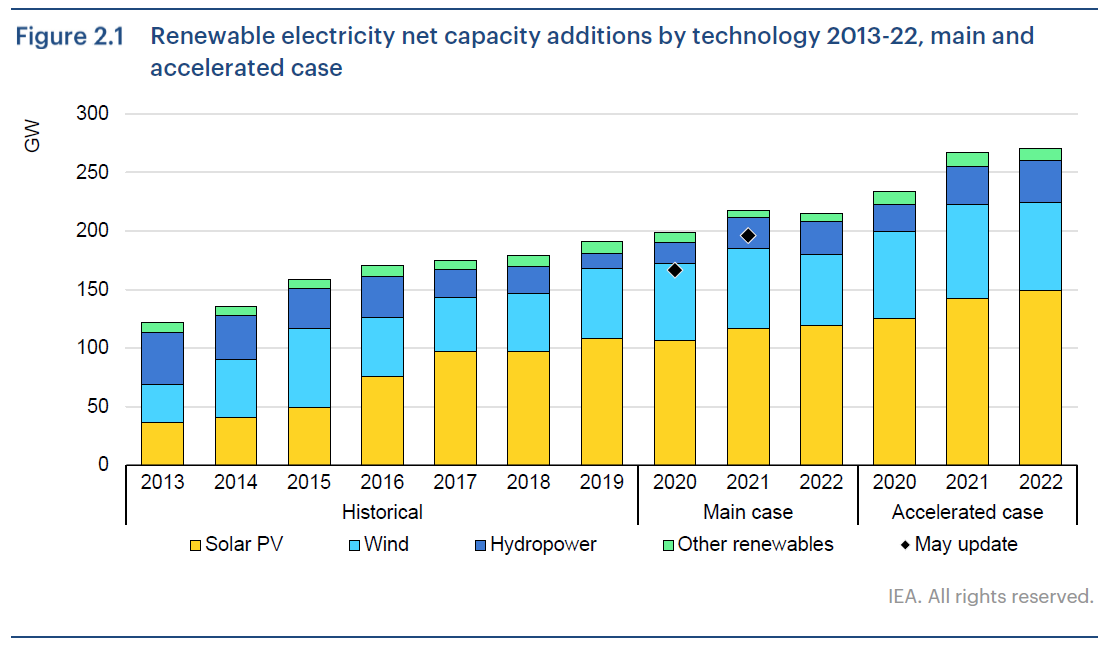 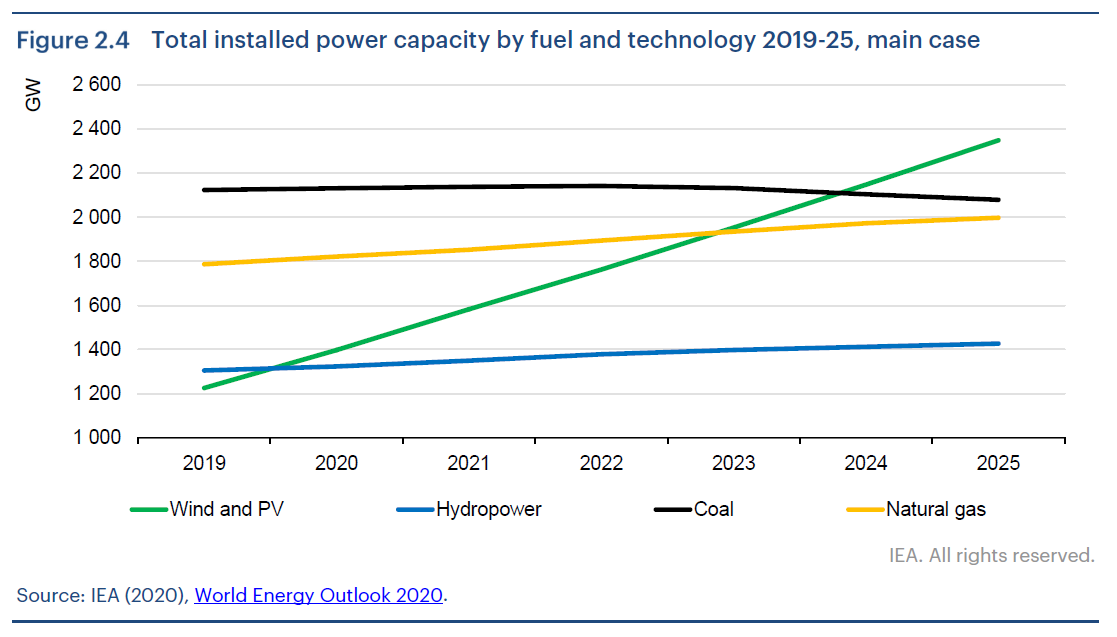 Economic stimulus measures focused on clean energy can directly or indirectly support renewables. While the majority of the USD 470 billion in energy-related stimulus packages announced by individual countries so far is primarily aimed at providing short-term economic relief, we estimate around USD 108 billion targets economic growth with a focus on clean energy. These measures can support renewables by providing additional financial support either directly – or indirectly through areas such as buildings, grids, electric vehicles and low-carbon hydrogen. This is also the case for the forthcoming EU economic recovery plan, which is expected to contain an estimated USD 310 billion of climate-related spending.
Renewable fuels for transport are an area of particular potential support, as the sector has been severely hit by the crisis. More can and should be done, however. For example, only two out of the 30 airlines worldwide that have received government support in response to the crisis were bound to environmental conditions, and only two have been required to commit to a sustainable aviation fuel blending level of 2%. Net-zero emission targets in key markets are expected to accelerate the deployment of renewables. Following the European Union and several European countries, three major Asian economies recently announced targets for reaching net-zero emissions: Japan and South Korea by 2050, and China by 2060. While it is too early to assess their precise impacts, these stated ambitions are very likely to further accelerate the deployment of renewables across all sectors, with potentially significant effects on global markets. 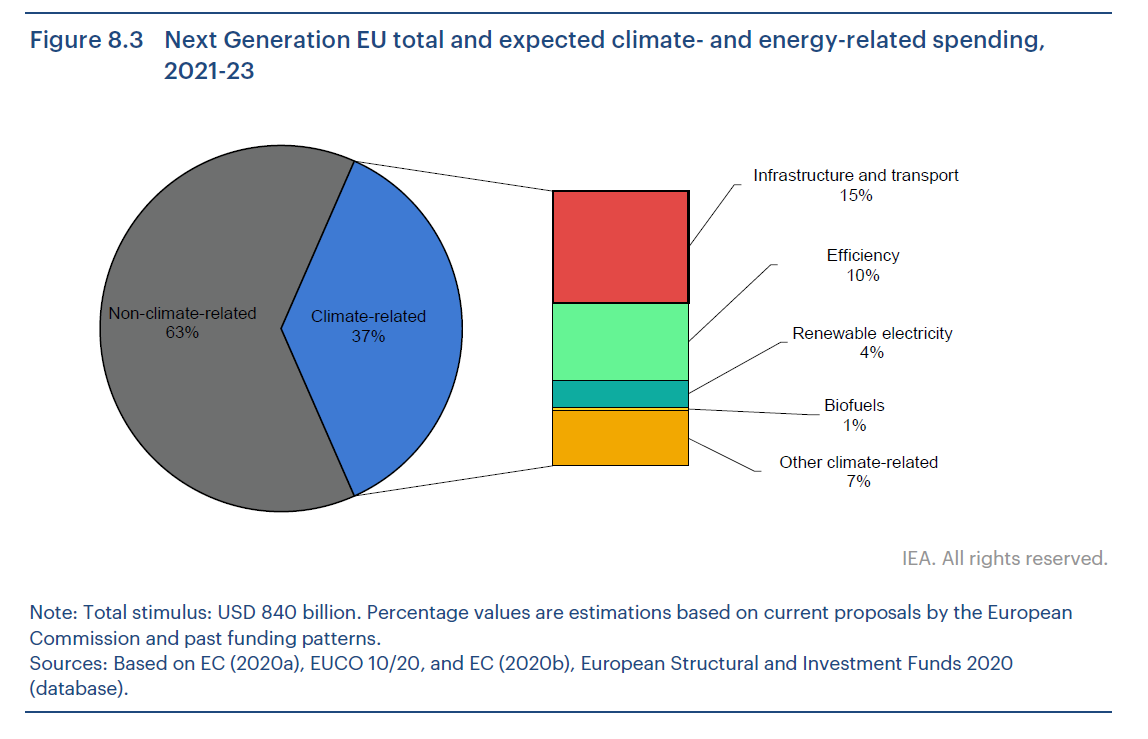