How Will We Replace The Fuel Excise Tax Revenues With Electric Vehicles? An electric vehicle movement is accelerating around the world, but what about the fuel taxes we pay for road repair? How much do these state and federal excise taxes generate, and more importantly in the EV age, what revenue source will maintain our highways and bridges infrastructure?

Individual states in the US have varying fuel taxing structures, some based on a percentage of the fuel price, along with a set surcharge in cents per gallon. The federal fuel tax is a set add-on to the price of fuel, 18.4 cents per gallon for gasoline/gasohol, and 24.4 cents for special fuel (primarily diesel).

To maintain our highway infrastructure, taxes on highway fuel, tires, heavy vehicle use tax, truck/trailer sales taxes all go into the Highway Trust Fund, managed by the US Treasury Department, after collection by the Internal Revenue Service. Funds are allocated to each of the states for their share of infrastructure maintenance.

In general, Americans pay approximately this broad average for regular gasoline, broken down by its cost components as shown in Figure 1. 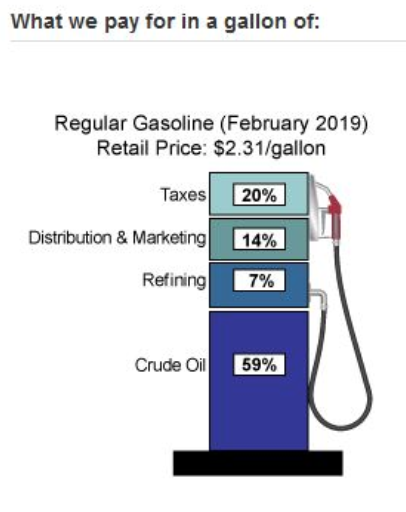 Referenced by the American Petroleum Institute, we see the state and federal taxes arrayed by state for both regular gasoline and diesel, are shown in Graphs 1 and 2. 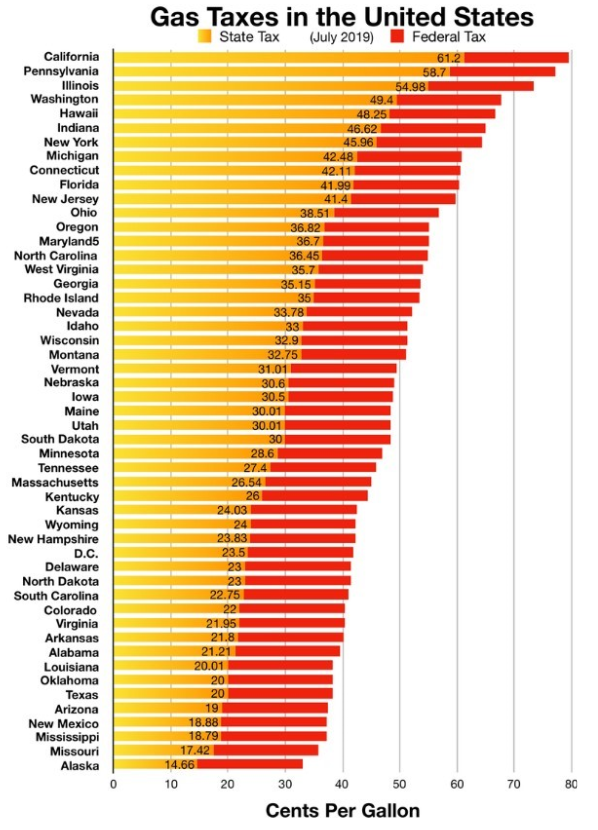 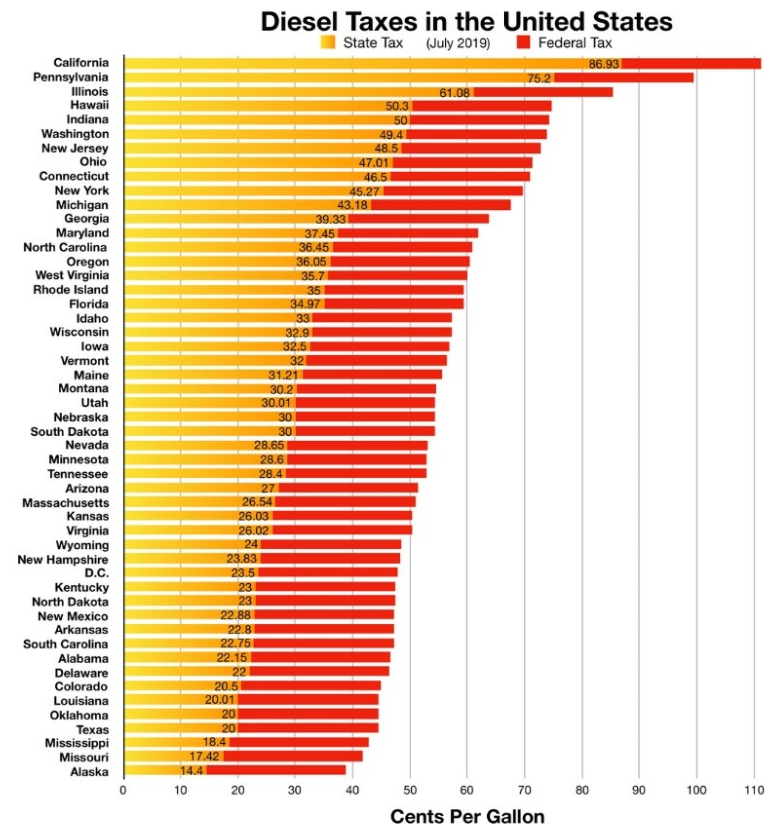 However, all states do not tax at the same rate are shown in Graphs 3 and 4 for regular gasoline and diesel, respectively, priced on 18 April 2020. The graphs reveal each state’s fuel tax as a percentage of the fuel price as shown on the right vertical axis; the left vertical axis is the price of fuel in dollars per gallon. 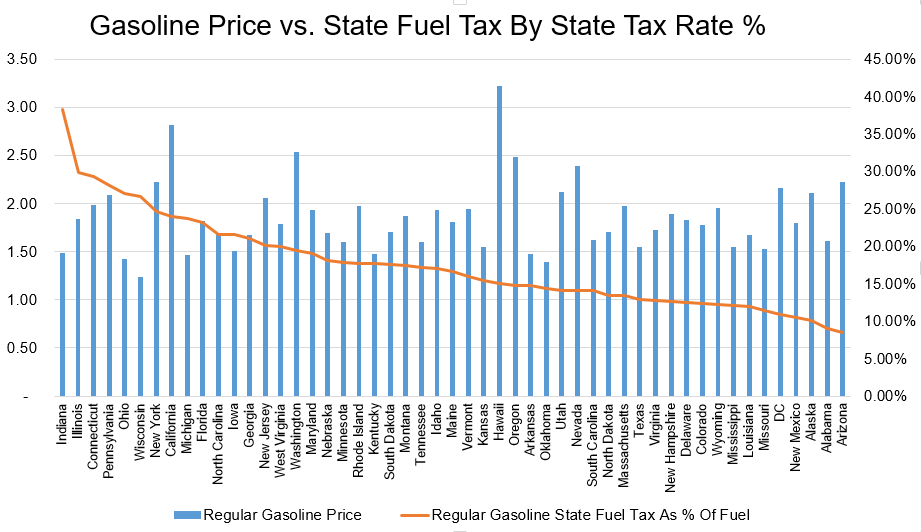 Although Hawaii and California lead the nation in the cost regular gasoline at or near $3 per gallon, other states such as Indiana and Illinois extract more than 30% of the gasoline cost in state taxes. For diesel, the story is somewhat different with California and Pennsylvania leading as the highest percentage tax rate at rates above 35%. 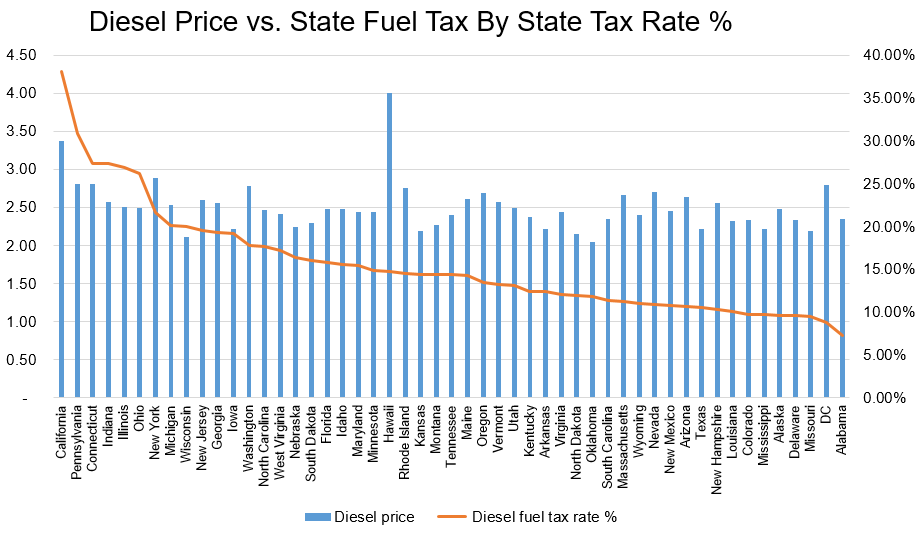 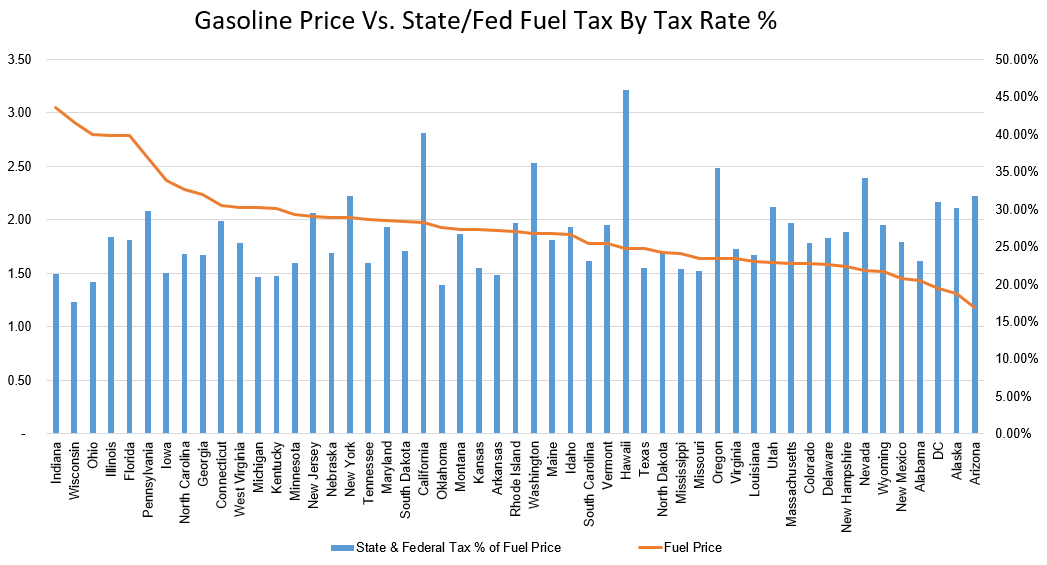 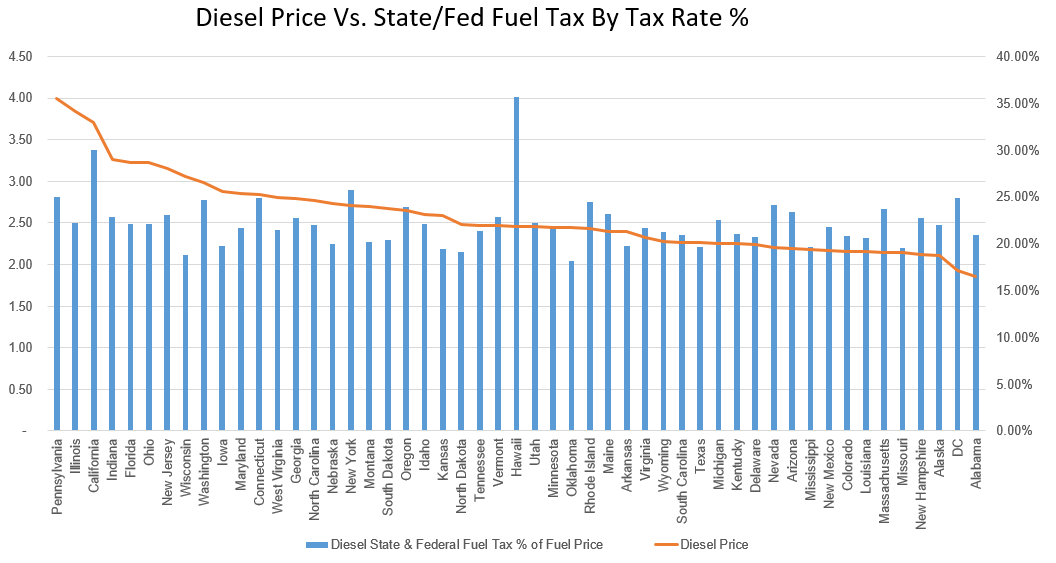 Shifting the focus to the European Union which has higher tax rates on fuel than in the US, France, Italy, Germany and the United Kingdom all collect in excess of 30 billion euros annually from fuel and lubricant taxes, with tax rates in the 45- 60 percentage range. This indicates a huge dependence on fuel tax for transportation infrastructure maintenance, and a larger gap to fill in the future as EVs are even more prominent. In Graph 7, tax revenues in billions of euros annually are shown on the left vertical axis, and the percentage of motor tax revenue coming from fuel shown on the right vertical axis. Total tax revenue generated by motor vehicles in EU-15 in 2018 were €428 billion. In the EU, the high tax rates for fuel are a key to drive consumer demand for EVs. 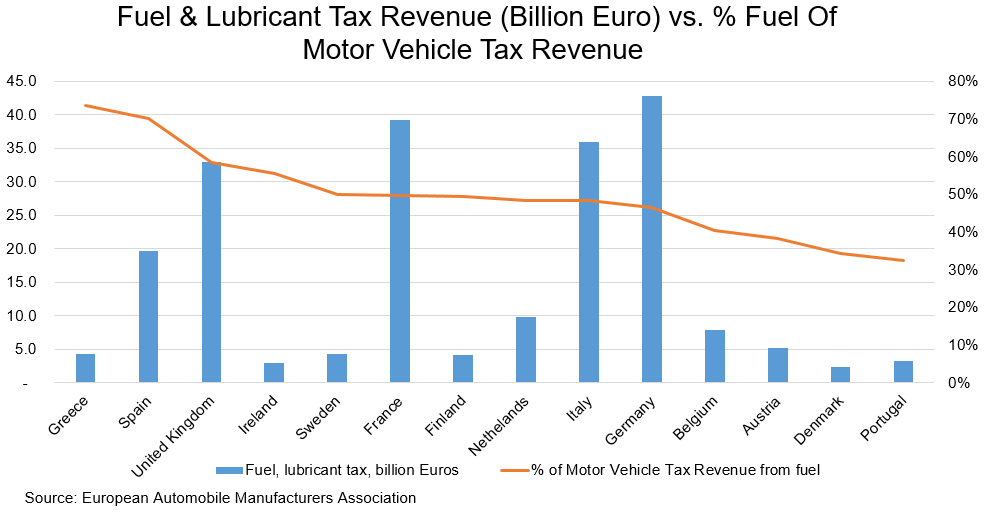 Per the US Energy Information Administration data, the US consumed 9.28 million barrels per day of gasoline and 3.12 million barrels per day in 2019. With the US average regular gasoline tax of $0.5024 per gallon and diesel tax of $0.5779 per gallon, total state and federal fuel tax receipts are $71.48 billion for gasoline and $27.64 billion for diesel for an annual total over $99 billion.

It seems like there are plenty of opportunities to include EVs in these funding programs-- if not at the gas pump then at registration, property taxes, toll booths, etc. So using that lost revenue as an argument against government programs to help enhance the EV market is surely short-sighted and easy to move past. But I do hope that the economic advantage EV drivers currently enjoy by not being charged gas taxes is at least partially replicated in whatever the next model would be (such as a lower, but non-zero, added tax to their registration compared with ICE vehicles). These gestures can be valuable to encourage the decarbonization of the nation's transportation sector

Matt, I think it will probably be necessary to raise both state and federal income taxes to cover road and highway maintenance. Using property taxes to pay for local infrastructure tends to improve roads in only the nicer areas of town, increasing the burden of poor maintenance on those least able to afford it.

And we should separate the responsibility of maintaining highways from that of lowering carbon emissions. Increasing registration fees for EVs won't help to lower carbon emissions if a state's electricity is generated by burning natural gas.

Bob, good points about real estate property taxes. I think one solution is for personal property (vehicle) tax that associates the entity doing damage to roads (vehicles based on registration weights) to highway/bridge improvement. Income taxes burden those with few or no vehicles.

Matt, I agree. We have to make up the tax dollars somewhere/somehow or the infrastructure deteriates. Could be a vehicle registration fee based on weight (similar to truck taxing) for those property tax states.