India’s union budget for 2020-21 was announced on the 1st of February and it finally showed some promise with regards to forwarding the country’s climate agenda. With India’s ambitious plans to add 175 GW renewable energy capacity by 2022, and a push for achieving 30% electric vehicle (EV) sales penetration by 2030, the new budget allocation indicate a commitment that goes beyond just announcements. Finance Minister Nirmala Sitharaman, in her budget speech, underlined a clear push for clean energies and the need to phase out aging thermal power plants. However, coal allocations for the year (including public sector investments) stand at INR 40,349 Cr ($ 5.4 billion) – more than double the total allocation to the Ministry of New and Renewable Energy (MNRE), including public sector investments. This difference is lower than that of 2019-20 by around 3,000 Cr ($ 400 million) but it still indicates a deeper entrenchment of the coal industry that counteracts some of the progress being made towards India’s Nationally Determined Contributions (NDCs). The rationalization of counteractive budget/policy efforts towards a collective goal can aid the transition to a green economy in India and in this blog post, I argue for green budgeting as a tool to achieve this alignment.

This year, the MNRE received a major addition with budgetary allocations going up 48% over last year’s revised estimates to INR 5,753 Crore (about $ 700 Million). India boasts the lowest levelized cost of utility-scale solar energy in the Asia-Pacific region and realizing this, the Ministry has refocused its funds towards supporting other nascent clean energy technologies – particularly Biopower and Decentralized Solar Energy. The latter has observed the largest gains due to an expansion of the Kisan Urja Suraksha evam Utthaan Mahabhiyan (KUSUM Scheme) introduced in February 2019 as part of a broader ambition to ‘double farm income by 2022’ KUSUM enables farmers to adopt solar-power for irrigation purposes and earn additional income by selling excess electricity back to the grid. While this will provide relief to already-burdened discoms (Distribution Companies) that heavily subsidize agricultural consumers, it does create the unaddressed possibility for rapid groundwater depletion – a problem that India is already grappling with. 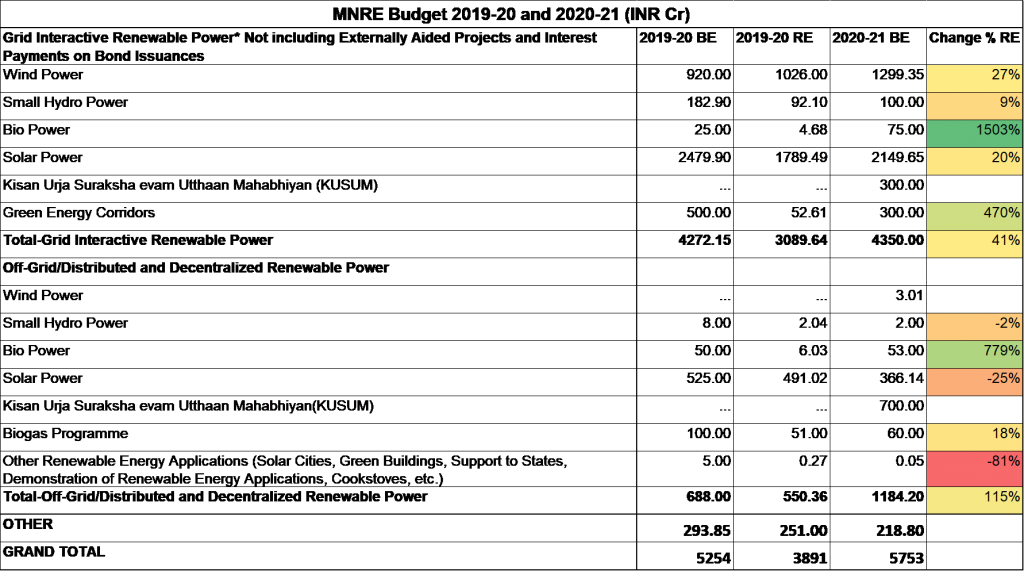 Incoherent policies counteract each other

These announcements are indicative of India’s increasing commitment to tackling issues related to climate change and the environment. However, corresponding budget allocations continue to be made in a seemingly haphazard manner that target goals in mutually exclusive silos. For example, the push for growth in domestic manufacturing and improvement in foreign reserve ratios has led the government to levy both a 15% safeguard duty on solar cells and panels as well as introduce a  mechanism that could allow for additional basic customs duty (BCD) of 20%. Ninety percent of Indian solar power projects use Chinese and Malaysian imported equipment and these duties are bound to increase project costs, inadvertently discouraging investments given the low tariffs typically expected of the sector. Our current domestic manufacturing capability is not mature enough to match demand and this shortfall will add another hurdle towards achieving solar (and therefore climate) targets.

Take for instance the coal cess that was introduced in 2010 and increased multiple times to the current rate of INR 400 ($ 5.4) per tonne of coal sold in India. Estimates state that by the end of this financial year, cumulative cess collected will mount up to INR 1.51 lakh crore (nearly $ 21 billion). This fund was originally intended to internalize the externalities created by fossil fuels by supporting the development of clean energy technologies through the National Clean Energy and Environment Fund (NCEEF). However, data from the Department of Expenditure (2018) shows that in FY 2016-17 just 24% of coal cess receipts went to the NCEEF, with the remainder being used to bail-out financially ailing discoms across the country. Ironically, these discoms distribute electricity that is generated primarily using coal – thereby indirectly feeding the fund back towards bolstering the fossil fuel industry it was originally designed to counteract.

Primarily because the Economic implications of climate change are ignored

At the root of this problem lies the ill-conceived notion that climate-change mitigation and economic development are competing government priorities. It is widely argued that GDP as a sole measure of progress incorrectly ignores financial measures environmental degradation and risks created by a changing climate – which becomes especially alarming given India’s exposure to the effects of climate change. Germanwatch, an environmental think tank, published its most recent Global Climate Risk Index in which India, having suffered 2,081 deaths (and thousands more displaced peoples) and over $ 37 billion in economic losses due to climate disasters in 2018 alone, ranks as the 5th most vulnerable country to climate change. While this figure is an already considerable 1.4% of GDP, it still doesn’t include losses due to climate stressors such as increased heat and subsequent reductions in productivity. According to the International Labour Organization, these losses can amount to 5.8% of India’s annual working hours – equivalent to 34 million full-time jobs.

On the 1st of February, Nirmala Sitharaman outlined three major themes of this year’s budget – aspirational India, economic development, and caring society. Budget allocations tied to climate change and environmental heads have been consistently classified under ‘caring society’, thereby explicitly separating these outcomes from mainstream economic development metrics. Despite any positive intentions, doing so underplays the severity of environmental issues and relegates solutions to the realm of altruism. As outlined above, climate change is clearly an existential crisis with overwhelming economic implications that are largely ignored due to the high associated social discount rate. Isolating the problem from larger concerns regarding economic growth, health, nutrition, and quality-of-life is dangerously myopic. To truly future-proof its developmental trajectory, India must transition to a ‘green’ financial system that captures the economic value of climate action, and green budgeting is an important first-step towards doing so.

Green Budgets as a solution

Creating a Green Budget requires evaluating the environmental impacts of all fiscal policies and outlining their coherence towards achieving international commitments and targets. This practice helps raise budgeting from a seemingly neutral administrative process to an effective policymaking tool that can address environmental objectives while also maintaining an emphasis on broader developmental priorities. A common understanding of the various financial risks associated with climate change produces a shared platform by which traditionally segregated aspects of the political economy may be aligned. Once the link between climate-change and economic development is cemented, the inefficiencies of incohesive and counteractive policies are immediately brought to light. The ultimate goal is for policymakers to understand and compare the resulting emissions caused per INR of public funds spent, and subsequently ensure that annual budgets are overall carbon neutral and/or NDC-aligned.

India’s economic survey already underlines the achievements and ambitions of national missions that target Sustainable Development Goals. However, beyond merely a stock-take of funds deployed under green missions, truly understanding progress requires a measure of budget-wide sensitivity towards desired outcomes and co-benefits. Co-benefits and other unintended effects (or environmental externalities) are vital to determine as they expose hidden environmental impact in any policy or budget document. Green Budgeting provides this unifying ‘climate-language’ to identify and measure the environmental impacts of fiscal policies across the board (whether they directly target environmental outcomes or not), assessing their alignment to national and international commitments. Mainstreaming this as a practice can paint a broad picture of the net environmental impact of an entire budget document – which is a proxy for any government’s annual list of priorities.

Green Budgeting practices, once adopted, are also strong indicators of a government’s commitment to climate action. A perception of public sector policy commitment to climate mitigation has been shown to increase technological innovation and investor confidence, which are important contributors to achieving India’s NDCs through an estimated $ 2.5 trillion in financing by 2030.

To begin climate budgeting, the Indian government may refer to the Paris Collaborative on Green Budgeting’s framework which emphasizes that “a comprehensive stock-take of favourable and harmful budget measures and their corresponding amounts provides a starting point for governments to assess the environmental alignment of the budget.” Doing so requires a deep and robust database of emissions and life-cycle environmental impacts for various economic activities, the development of which should become a priority area for domestic research institutions. Once established, the database can also guide India’s government towards adopting a formal ‘green taxonomy’ through which activities that meet minimum emissions criteria can be measured, promoted, and eventually incentivised.

Isolated efforts to mitigate climate change will at this point be ultimately insufficient; this is a collective action problem that requires both inter and intra governmental coordination. Indonesia, the UK, and Norway have already begun establishing international best practices towards greening public finances, and it is only a matter of time before others follow suit.