The German coal phase-out is law: an overview

It is indeed achieved: On 3 July 2020, the Federal Council of Germany approved both the Coal Exit Act and the associated Structural Aid Act. It is now clear that Germany will be phasing out coal-based electricity generation by 2038 at the latest. What officially began in June 2018 with the expert Commission on Growth, Structural Change and Employment has now come to an end.

Two laws regulate the phase-out of coal and the associated support for the affected regions. The Act on the Reduction and Termination of Coal-fired Power Generation and on the Amendment of Other Acts. Particularly, the Coal Exit Act regulates the timetable for the coal exit, as well as the associated conditions and compensation for power plant operators.

The Structural Aid Act for Coal Regions, on the other hand, regulates the financial support for structural change in the regions and federal states affected by the coal phase-out.

Figure 1 shows the coal-fired power plants still active on the wholesale electricity market as of April 2020 (source: Federal Network Agency) and the shutdown schedule under the new law. 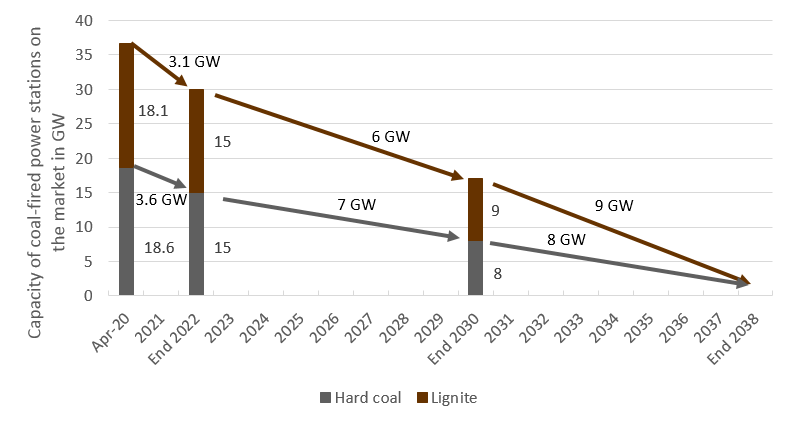 However, according to the law, the shutdown of the last power plant could also be finalised three years earlier and thus in 2035. Should higher CO2-prices or renewable energies make coal-fired power plants uneconomic even earlier. The latter would not receive any compensation either (source: Erneuerbare Energien). This leads us to the next topic, namely financial compensation.

Tender for shutdown and compensation

The decommissioning of the hard coal-fired units will be regulated by a tendering procedure until 2027. From 2031, the shutdown will then be carried out by law. The earlier the operators enter the tendering process, the higher the maximum permissible value in the tender.

Figure 2 shows the maximum values per kilowatt of net nominal capacity. The first tender for 4 GW is to take place on 1 September 2020, with the subsidised plants having to be shut down by the end of 2020.

Figure 2: maximum prices in the tenders for the shutdown of hard coal-fired power plants in EUR/kW (Source: Energy Brainpool)

The amendment to the coal replacement bonus for the conversion of combined heat and power (CHP) plants to more flexible and climate-friendly power generation was also adopted with the Coal Exit Act.

Older plants will no longer receive a bonus here, while the bonus for younger power plants has been increased. This could make it more interesting for operators to convert to innovative or climate-friendly CHP compared to the shutdown tender.

For lignite-fired power plants, the German government has contractually agreed specific, block-specific shutdown dates with the operators. The financial compensation for these shutdowns totals EUR 4.35 billion, of which EUR 2.6 billion is intended for the RWE Group and EUR 1.75 billion for LEAG.

In 2022, 2026 and 2029, the law will be reviewed and may be amended if necessary. Indicators to be considered are the impact on security of supply, the installed capacity of plants that have been converted from coal to gas, the heat supply, electricity prices and climate targets.

The target of a 65 percent share of renewable energies in gross electricity consumption in 2030 has also been fixed into law. However, there is no evidence so far of an increase in the number of wind or PV installations in order to achieve this share.

Furthermore, it was determined that the CO2-emission certificates that become free when coal-fired power plants are shut down should be cancelled. The German coal phase-out will therefore also have a pan-European impact.

To cushion and shape the structural change in the regions affected by the coal phase-out, the Structural Aid Act provides for financial support of up to EUR 40 billion. This is intended to compensate for the loss of jobs and at the same time enable the development of a more sustainable economy.

The Federal Government will provide direct support of EUR 26 billion to the affected regions by expanding the infrastructure and setting up new research facilities, while the remaining EUR 14 billion will go to the lignite mining areas or the affected federal states, respectively (source: Bundesrat).

Besides that, the federal states can use the money to invest in business-related infrastructure, local public transport, broadband and mobility infrastructure, environmental protection and landscape conservation. Figure 3 shows the distribution of financial aid by mining areas and also by federal states.

An additional amount of almost EUR 1.1 billion will go to structurally weak locations of hard coal-fired power plants throughout Germany.

While the federal government has finally cast the coal phase-out into law, environmental associations protested against the phase-out, which was too slow and gold-plated for the operators of coal-fired power plants.

The economic conditions on the electricity market, in particular the lower electricity prices, the higher margins from gas-fired power generation and the competition from renewable energies, would have pushed some of the coal-fired power plants out of the market as well, thus not have making such high compensation necessary. Consequently, the market has overtaken politics here.

Climate and energy scientists at least agree: the coal phase-out as currently planned in Germany is not compatible with the 1.5 degree target of the Paris Agreement (source: DIW). If Germany therefor wants to meet its climate targets, the phase-out plan would have to be tightened up in the 2020s.

While the federal government has finally cast the coal phase-out into law, environmental associations protested against the phase-out, which was too slow and gold-plated for the operators of coal-fired power plants.

I'm curious-- was the 'gold plating' of the phase out just benefitting the operators of the coal plants, or did it include provisions for the workers and communities that relied upon the fossil fuel? I ask because I know in the U.S. a lot of attention is rightfully being given to ensuring the regions that are propped up by coal are taken care of during the energy transition, though the best strategy to do so has certainly been a debate. I'd be curious if Germany has faced similar considerations