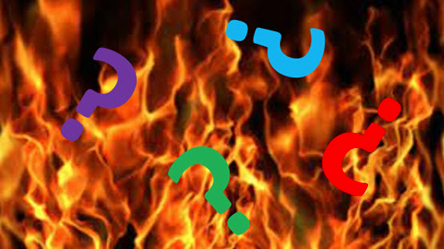 The Ocean Panel, a group of 14 countries that bills itself as the only ocean policy body made up of serving world leaders with the authority needed to trigger, amplify and accelerate action worldwide for ocean priorities has presented the case of “The Ocean as Solution, Not Victim.”

Although the United Sates is not a member of this group, Jane Lubchenco, Deputy Director for Climate and Environment for the White House Office of Science and Technology Policy, is co-chair of the Ocean Panel Expert Group, which is looking to protect 100% of the ocean area under the groups’ controls by 2025. And to put the oceans to work as a solution to climate change by providing as much as 1/5 of the carbon emission reductions that are needed to get us to the 1.5 degree target by 2050.

The five ways the panel proposed to accomplish this are:

The National Renewable Energy Laboratory (NREL) report Marine Energy in the United States: An Overview of Opportunities found that the total marine energy technical resource of the 50 states is 2,300 TWh/yr or the equivalent of roughly 57% of 2019 U.S. electricity generation – enough to power 220 million U.S. homes.

The break down of the marine resource for the states is: 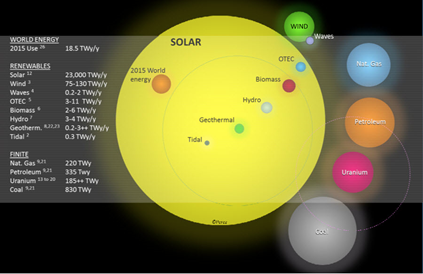 According to The Ocean Panel article, “Putting the oceans to work by catching some of the wind offshore is part of the Biden Administration’s plan to blunt climate disruption and reduce dangerous pollution”.

The NREL estimates that the technical resource potential for U.S. offshore wind is 7,200 terawatt-hours per year of generation or about .8 TW. Whereas,  according to the Global Wind Energy Council global offshore wind capacity will surge to only .234 TW by 2030.

In either case, offshore wind, which is neither a marine resource nor a constant source of power as opposed to the other marine technologies, has at a maximum a tenth the potential of OTEC. In part because, as shown in the Marine Renewables Canada graphic below these plants need to be situated along the adjacent continental shelf of the host nations, which make up only 8 percent of the oceans’ total surface. 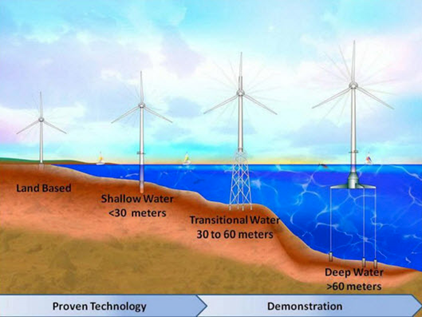 Including the Ocean Thermal potential of the US Pacific Territories and Freely Associated States 98% of the US electricity demand can be derived from the tropics.

And adding Puerto Rico and the US Virgin Islands, 112% of the total US electricity requirement can be provided by OTEC.

But, as Larry Weiers, writer of the book  Sustainability Of The Modern Human Economy, in an article The cost of Decarbonization: how much green to go green?, shows the  electrical sector is only a third of the energy problem. We have to decarbonize, transportation and heating as well so, 4678 TWh/yr doesn’t cut it.

The 2018 paper An Evaluation of the Large-Scale Implementation of Ocean Thermal Energy Conversion (OTEC) Using an Ocean General Circulation Model with Low-Complexity Atmospheric Feedback Effects by researchers from the University of Hawaii estimated the steady-state OTEC power maxima for global scenarios was 8 to 10.2 TW. Using an upwelling strategy that uses a cold water pipe to bring cold water from the deep to a condenser near the surface.

The 2020 paper,  Ocean Thermal Energy Conversion (OTEC) - Past, Present, and Progress edited by Albert S. Kim and Hyeon-Ju Kim indicates that the net efficiency of this design is 2.71 percent. (Note: greater efficiency is an objective of The Ocean Panel).

Instead of upwelling, Thermodynamic Geoengineering uses a heat pipe that shifts heat into the deep and through a heat engine to produce power at a net efficiency of 7.6 percent.

Through this efficiency gain alone the steady-state of the system increases to between 22 and 28.6 TW.

In either case this is enough to replace fossil fuels in total and then some.

The Nature Climate Change article Increasing ocean stratification over the past half-century shows, “Seawater generally forms stratified layers with lighter waters near the surface and denser waters at greater depth. This stable configuration acts as a barrier to water mixing that impacts the efficiency of vertical exchanges of heat, carbon, oxygen and other constituents.

The paper Summertime increases in upper-ocean stratification and mixed-layer depth, however, found over the past five decades, the stability of the ocean increased at a rate six times faster than the scientists were anticipating.

The pycnocline is an invisible layer dividing the abyss from the surface mixed layer and stops water (therefore also heat) from moving through it. With the consequence the mixed layer traps heat and the nutrients vital to the global food supply.

Thermodynamic Geoengineering is the only technology that moves heat through the pycnocline and returns ocean stratification to its preindustrial condition.

Conventional OTEC advocates claim their technology upwells nutrients vital to the food chain  but instead of mixing tropical heat into the mixed layer it disperses heat towards the poles. With the result the poles are warmed to the same extent the tropics are cooled.

As the following graphic from Geosciences demonstrates, phytoplankton are the major primary producers in the ocean, and the rest of the marine animals rely them for sustenance. 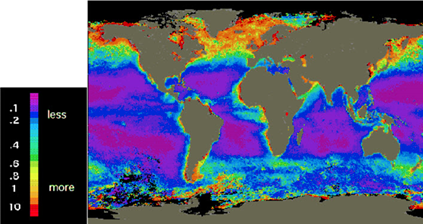 Most of this production occurs in the North but in the tropics where Thermodynamic Geoengineering and OTEC can uniquely be practiced, the oceans are virtually barren and where upwelling would have minimal impact.

The North Pacific Marine Science Organization, is an intergovernmental scientific organization comprised of Canada, People's Republic of China, Japan, Republic of Korea, Russian Federation, and the United States of America, which recently advance the concept of Ocean Negative Carbon Emissions (ONCE).

Their Background, Goals and Motivations are: “The ocean is the largest active carbon pool on Earth, with great potentials for carbon negative emission. The ocean has a large capacity to sequester carbon and has absorbed approximately 25% of the CO2 produced by fossil fuel combustion and cement production since the beginning of the industrial revolution. Ocean Negative Carbon Emission (ONCE) has the potential to contribute to negative emissions if the mechanisms and processes involved are properly understood.”

One attempt at understanding these processes was undertaken by Resplandy et al. in their paper Quantification of ocean heat uptake from changes in atmospheric O2 and CO2 composition. Where they estimated the release of atmospheric oxygen and carbon dioxide as the ocean warms and releases these gases, which they were able to isolate from the direct effects of anthropogenic emissions and CO2 sinks.

Their measurements of atmospheric O2 and CO2 were summed to yield a tracer “atmospheric potential oxygen” (APO), which =O2 + 1.05 × CO2.

The processes contributing to the observed changes in atmospheric potential oxygen (ΔAPOOBS) are fossil fuel burning and cement production, ΔAPOFF, the ocean sink for anthropogenic carbon (ΔAPOCant) which remove APO from the atmosphere, the fertilization effect of anthropogenic aerosol deposition which promotes marine photosynthesis (ΔAPOAtmD) and the changes in solubility, biology and ocean circulation due to warming (ΔAPOClimate) are depicted in the following graphic. 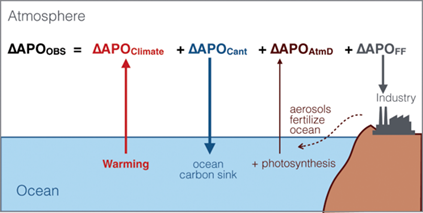 It must be noted, with Thermodynamic Geoengineering, ΔAPOFF and ΔAPOAtmD would be eliminated so ΔAPOOBS would be a function of only ΔAPOClimate and ΔAPOCant  where ΔAPOOBS was determined to be 255.93 ± 13.74 per meg and ΔAPOCant is 147.75 ± 3.69 per meg, therefore ΔAPOClimate is 108.18 per meg or 73 percent of ΔAPOCant.

One part per million of atmospheric CO2 = 7.8 Gigatonnes of Carbon Dioxide in the atmosphere.

The atmospheric CO2 level as of Apr. 10, 2021 was 419.17 ppm and a year ago on the same date was 416.67 ppm so, the atmosphere accumulate 2.5 ppm during the year. But this is only 108.18/255.93 or 42 percent of the total atmospheric potential oxygen. The natural sinks like the ocean and the biosphere absorbed approximated 58% of our emissions so in order to return atmospheric levels to the preindustrial level of 280 ppm we would have to remove (419.17-280) * 7.8 gigatonnes * (255.93/108.18) = 2568 gigatonnes which is accomplished over the course of 226 years (11.4 gigatonnes/year) with Thermodynamic Geoengineering simply by cooling the ocean surface by converting a portion of the heat of global warming to work and moving 92.4 of the heat into the abyss where it returns at a rate of 4 meters to the surface where it can be recycled to produce more energy. Until all of the heat of warming has been be converted to work and all of the emissions of fossil fuels have been safely consumed over the course of about 3,000, emissions free, energy rich, years.

But this would be the case if we were to able to stop accumulating ocean heat this instant, which we can’t. 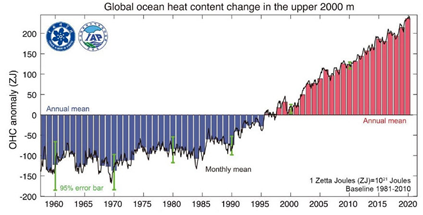 The best that we can hope for is to invest the next 3 years developing and scaling Thermodynamic Geoengineering and for the 35 years after that multiply a fleet of 1 gigawatt plants 2.5 times a years so that by 2050 we can start depleting ocean heat by converting it to work and by 2059 start drawing down the heat and CO2 at a rate of 7.6% every year for the next 226 years and repeat 12 times per the following graphic until all of the heat and excess carbon has been eliminated.

According to Wikipedia, the estimated cost of carbon dioxide removal with the technologies offered by Carbon Engineering, Climeworks and Global Thermostat are  $94–232, $600 and $120 respectively. And $25 tonnes for CarbFix.

In the best case with these technologies therefore it would cost  $250,000,000,000 a year to drawdown slightly less that a quarter of the CO2 that will have accumulated by 2050. Which is the worst kind of greenwashing, a colossal waste of money better spent on other priorities, and a waste of  the quarter of the global energy supply that would be used by CO2 capture machines by 2100.

In the alternative we can start drawing down 15.3 gigatonnes a year (3466/226) by that time with Thermodynamic Geoengineering at a profit of $262.39 a tonne per the following graphic and the pricing calculated here.

For a total annual cost of $4.6 trillion compared to the $5.2 trillion the IMF estimated in 2017 fossil fuels were being subsidized by. To say nothing of what they are making in profit.

Is it any wonder the Oil Lobby Has Learned to Love Carbon Taxes?

The ocean is the solution to the energy, environmental and economic concerns of mankind, but only Thermodynamic Geoengineering allows it to live up to its potential.

In short, it is the Oil Lobby’s greatest nightmare.