The following from Statista 2020  shows how from a first case reported outside of China, January 22, the number of reported cases of COVID19 has grown to 72,252,541 as of December 13. Which works out to an exponential growth rate of 4.9 percent over 365 days. 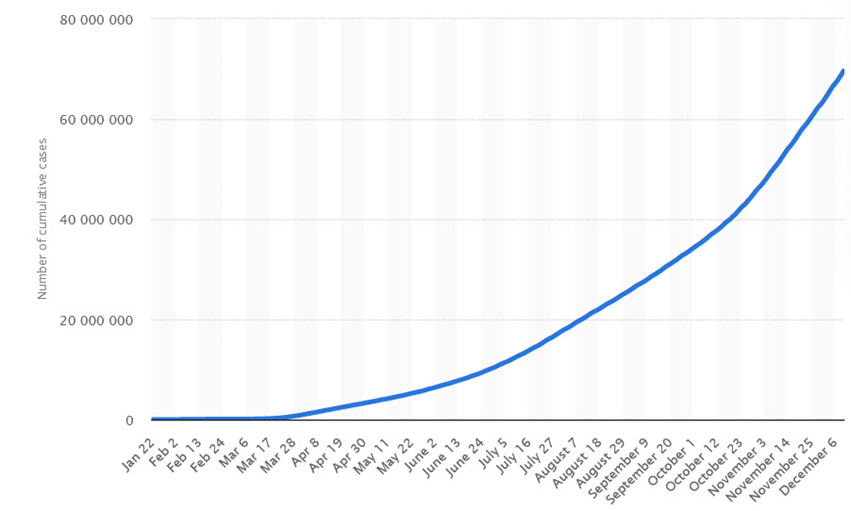 As great a threat as COVID19 is, no less than the Red Cross has warned that global warming is worse. And in support of this claim they point out that the world has been hit by more than 100 climate change-related disasters since the World Health Organization declared the pandemic.

Physicist Tom Murphy, University of California, San Diego, plotted the following data ten years ago from the U.S. Energy Information Agency showing that from 1650 to 2010 there has been a steady growth trajectory in energy consumption, in the United States of about 2.9% annually. 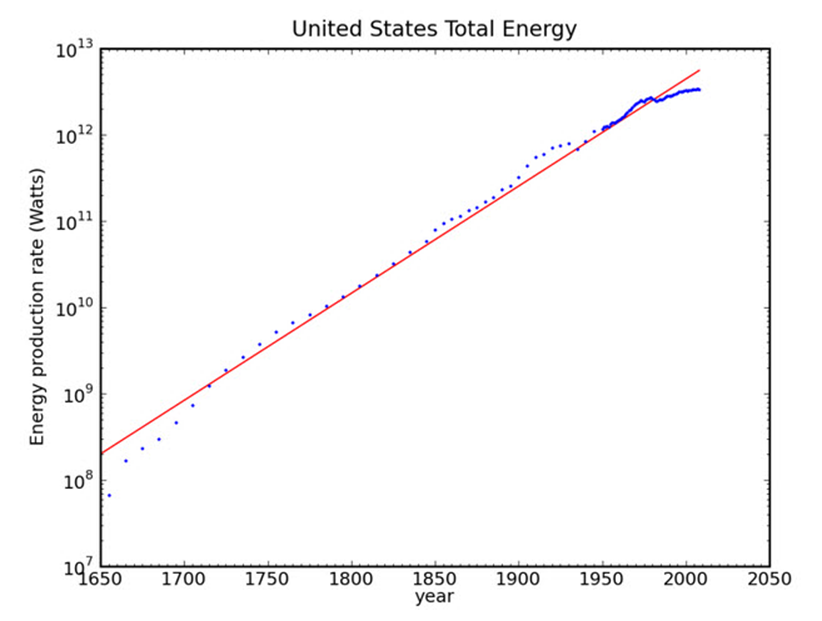 As Murphy noted in his piece, Galactic-Scale Energy, “governments and organizations everywhere make assumptions based on the expectation that the growth trend will continue as it has for centuries—and a look at the figure suggests that this is a perfectly reasonable assumption.”

Converting the scale of Murphy’s plot from logarithmic to exponential as shown below, however, the true nature of this growth becomes more apparent and the reasonableness of any assumption that this can continue going forward disappears. 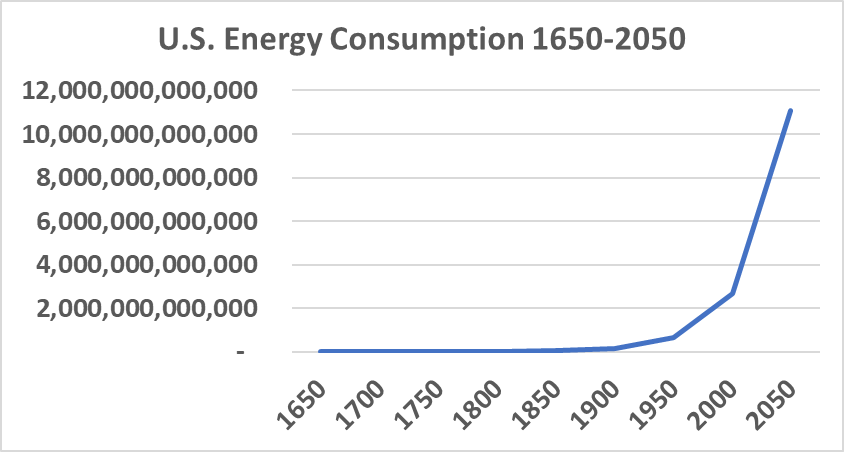 To punctuate this fact, Murphy produced the following chart which for the sake of convenience reduces the energy consumption growth rate to 2.3% /year to demonstrate consumption increases 10-fold every 100 years at the historical level. 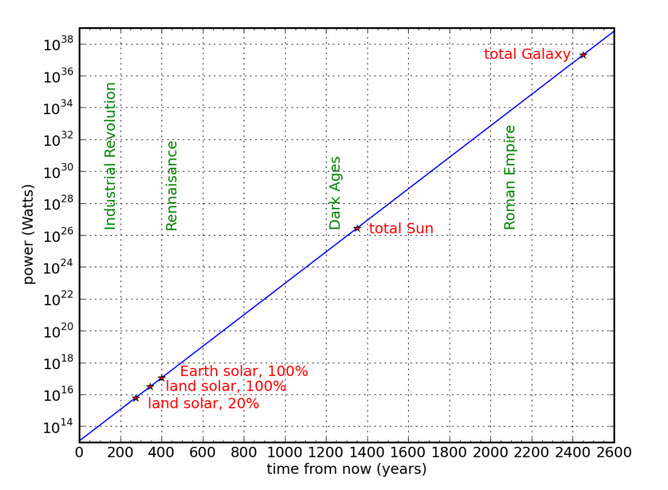 The red highlights on the chart show that 275 years from now we would be consuming 7000 terawatts (TW) or 20% of the total solar energy striking the land surface; 70 years later, 100% of the total solar energy reaching the land would be consumed; 55 years later still, 100% of the energy striking the entire surface would be used; 1350 years from today we would require all the energy generated by the sun, and 1100 years after that we would need  the energy potential of the hundred-billion stars in the Milky Way. Which is to say, the current rate of consumption leads directly to Hell on Earth. And to punctuate this point Murphy produced the following graphic which explores the thermodynamic limits of the problem which shows that at the current rate, 950 years from now, we would be demanding the energy equivalent necessary to produce the temperature at the surface of the sun. 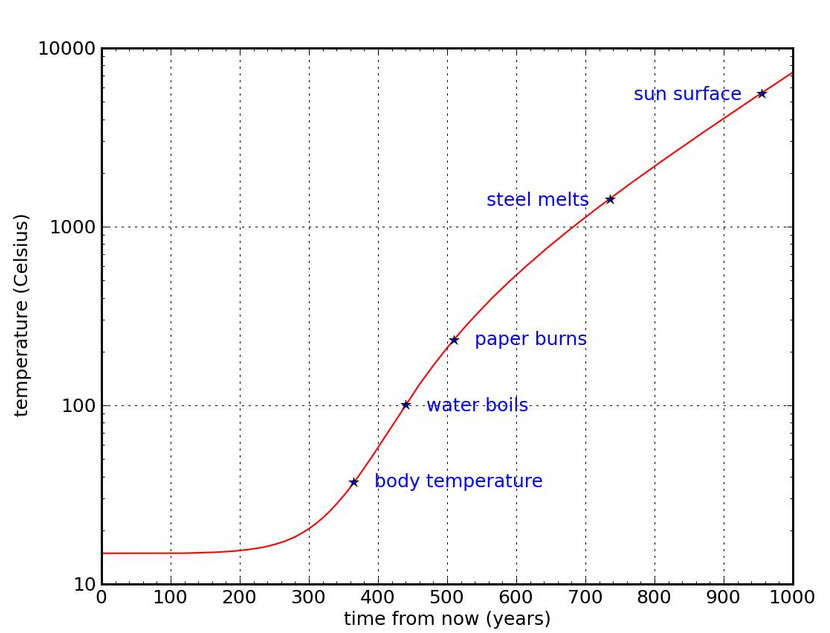 As Murphy noted, “The Earth gets rid of its energy by radiating it into space, mostly at infrared wavelengths. No other paths are available for heat disposal. The absorption and emission are in near-perfect balance, in fact. If they were not, Earth would slowly heat up or cool down. Indeed, we have diminished the ability of infrared radiation to escape, leading to global warming. Even so, we are still in balance to within less than the 1% level. Because radiated power scales as the fourth power of temperature (when expressed in absolute terms, like Kelvin), we can compute the equilibrium temperature of Earth’s surface given additional loading from societal enterprise.”

The Club of Rome predicted looming economic collapse in its 1973 report “The Limits to Growth”, which said, “the global system of nature in which we all live – probably cannot support present rates of economic and population growth much beyond the year 2100.” And 45 years later, Nature says the Gloomy 1970s predictions about Earth’s fate still hold true.

So, if we can’t continue consuming, some suggest we can just stop wasting energy?

Flanner, however, in his paper, Integrating anthropogenic heat flux with global climate models, showed that “Nearly all energy used for human economy is, at some point, dissipated thermally within Earth's atmosphere or land. This is a consequence of the second law of thermodynamics - the tendency of energy towards higher entropy (more disordered) forms. Because the energy we derive from non-renewable sources (coal, petroleum, natural gas, and nuclear) would not otherwise have been introduced to the Earth System as heat (on relevant timescales), it can be considered a climate forcing term. Globally, in 2005, this anthropogenic heat flux (AHF) was +0.028 W/m2, or only about 1% of the energy flux being added to Earth because of anthropogenic greenhouse gases.”

But, as the following shows, Flanner’s .028 W/m2 will equal today’s greenhouse forcing by 2155 simply through exponential growth and 250 later (if we haven’t converted solely to solar and are using every square metre of the Earth’s surface to produce energy) we will have burnt the planet up with the waste heat of any other energy source.

Examples of endothermic processes include photosynthesis, melting, evaporation, sublimation, cracking of alkanes, thermal decomposition (oxidation), hydrolysis, nucleosynthesis of elements heavier than nickel in stellar cores, high-energy neutrons that can produce tritium from lithium, nuclear fusion of elements heavier than iron in a supernova, dissolving barium hydroxide with ammonium chloride or the dissolving of citric acid with baking soda. None of which help with our energy problem, particularly when the energy stored in processes like photosynthesis, the cracking of alkanes, or the production of tritium is released to produce energy with byproducts like CO2 and/or copious amounts of waste heat.

Which leaves neutral reactions like electrolysis and hydrogen fuel cells, which are thermodynamically balanced with the opposite sign, and the conversion of energy in excess of that which is already contained in the Earth’s otherwise balanced system. 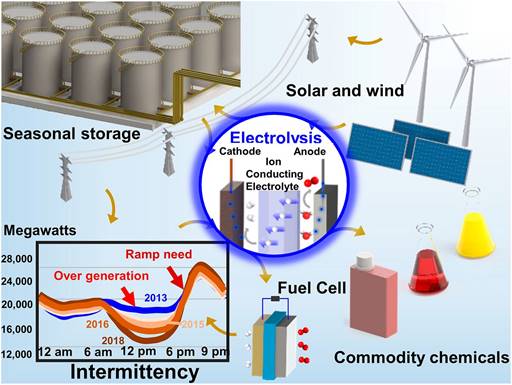 The problem is, wind and solar are intermittent, which is another form of waste since we must back it up by seasonal or diurnal storage. As are carbon dioxide removal schemes that are all energy parasitic except for Negative-CO2-emissions ocean thermal energy conversion where hydrogen is produced and CO2 is sequestered at an energy cost slightly less than that required to split water with conventional electrolysis.

As Murphy noted, even today the Earth is only out of balance by less than 1%.

The following graphic from the paper “Estimates of Meridional Atmosphere and Ocean Heat Transports” by Trenberth and Caron shows that between 5 and 6 petawatts is moved through the atmosphere and ocean from the equator to the poles annually. 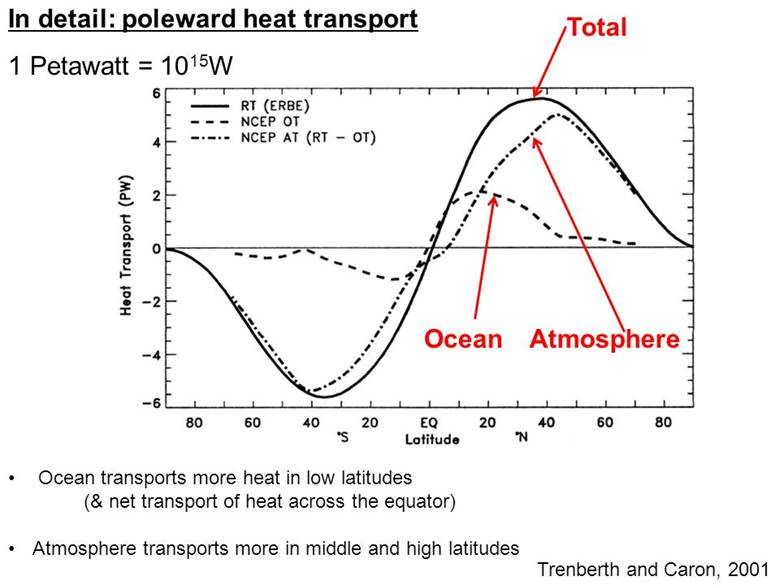 The paper Quantification of ocean heat uptake from changes in atmospheric O2 and CO2 composition as amended by Ralph Keeling  shows a ΔOHC trend of global warming of 1.21 ± 0.72 x 1022 J/yr, which equals ~ 384 terawatts a year or about 6.4 percent of the total heat that circulates annually.

The oceans began accumulating heat 250 years with the commencement of the industrial revolution and circulates that heat through the thermohaline circulation that has a cycle length of about 1,000 years.

We aren’t therefore likely to feel the feel impact of global warming for another 750 after which the sixth extinction event will kick in in earnest.

In the alternative, we can forestall the inevitable by converting the heat of global heat to work at a rate of 7.6 percent and move the difference to deep water, counter cyclically to the thermohaline with heat pipes, and then recycle the residual heat within the lower latitudes once it resurfaces in 226 years, repeatedly, until all of the heat of warming has been converted to work and the waste heat of those conversions has been harmlessly dissipated to space.

Such conversions can, uniquely, bend the energy curve back to the preindustrial baseline while providing 3,000 years of environmental security and the energy necessary to meet our Sustainable Development Goals.