(NucNet) The US Department of Defense has issued three contracts for companies to start design work on mobile, small nuclear reactors, as part of a plan towards deploying nuclear power for US forces at home and abroad.

The DOD awarded contracts to Westinghouse Government Services of Washington for $11.9M; BWX Technologies of Virginia for $13.5M; and X-energy of Maryland for $14.3M, to begin a two-year engineering design competition for a nuclear microreactor designed to potentially be deployed with the nation’s armed forces

The combined $39.7m in contracts are from Project Pele, a project to develop a prototype microreactor in the 1-5 MW power range. The Department of Energy has been supporting the project at the Idaho National Laboratory.

The DOD said in a press statement that Project Pele involves the development of a safe, mobile and advanced nuclear microreactor to support a variety of missions such as generating power for remote operating bases. The prize at the end of the two year “bake off” could be huge with contracts to build a fleet of the selected design for all branches of the military.

“After a two-year design-maturation period, one of the three companies may be selected to build and demonstrate a prototype.” 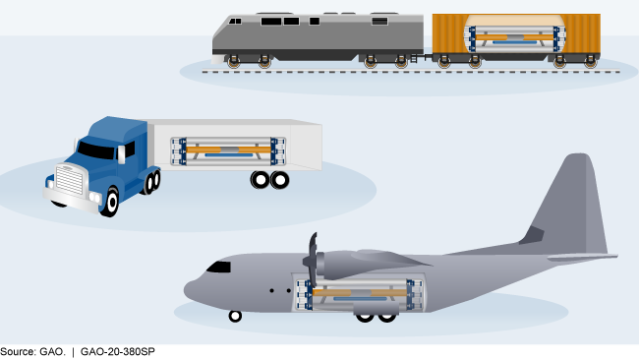 The statement said microreactors would significantly reduce the need for investments in costly power infrastructure and use of fossil fuels. In civilian applications, they could be easily relocated to support disaster response work and provide temporary or long-term support to critical infrastructure like hospitals, as well as remote civilian locations where delivery of electricity and power is difficult.

A May 2019 study concluded that mobile nuclear microreactors can support armed forces deployment and meet power demands in developed areas such as Europe and “immature theaters” of conflict in lesser developed areas.

The study said a microreactor could deliver one to 10 MW or so of electrical power for years without refuelling, in a size small enough to be transported by road and air.

Microreactors, usually of 10MW or less, are under development in the US by companies like Westinghouse, NuScale and Terrestrial Energy, and also by NASA for space exploration.

Industry Response to the Contract Awards

The Nuclear Energy Institute said in a statement on its website that DOD’s program was the latest example of public-private partnerships allowing developers to demonstrate technology prior to commercial deployment and verify the capabilities of their designs.

NEI Senior Director of New Reactors Mark Nichol said, “We are entering a decade of nuclear innovation where we will see advanced nuclear technologies developed and deployed to address the energy needs in a wide variety of markets,”

Pele is not the only attempt at introducing small nuclear reactors to the Pentagon’s inventory.

A second effort is being run through the office of the undersecretary of acquisition and sustainment. That effort, ordered in 2019, involves a pilot program to demonstrate the efficacy of a small nuclear reactor, in the 2-10 MW range, with initial testing at a Department of Energy site by 2023.

Microreactors are not defined by their fuel form or coolant. Instead, they have three main features:

Factory fabricated: All components of a microreactor would be fully assembled in a factory and shipped out to location. This eliminates difficulties associated with large-scale construction, reduces capital costs and would help get the reactor up and running quickly.

Transportable: Smaller unit designs will make microreactors very transportable. This would make it easy for vendors to ship the entire reactor by truck, shipping vessel, airplane or railcar.

Self-regulating: Simple and responsive design concepts will allow microreactors to self-regulate. They won’t require a large number of specialized operators and would utilize passive safety systems that prevent any potential for overheating or reactor meltdown.

Microreactor designs vary, but most would be able to produce 1-20 megawatts of thermal energy that could be used directly as heat or converted to electric power. They can be used to generate clean and reliable electricity for commercial use or for non-electric applications such as district heating, water desalination and hydrogen fuel production.

Most designs will require fuel with a higher concentration of uranium-235 that’s not currently used in today’s reactors, although some may benefit from use of high temperature moderating materials that would reduce fuel enrichment requirements while maintaining the small system size.