A November 2017 analysis by the McKinsey Global Institute of around 800 occupations in 46 countries estimated between 400 million and 800 million jobs could be lost due to automation by 2030.

Fast forward three years and the UN reports twice that many, nearly half of the global workforce of 1.6 billion people, could see their livelihoods destroyed due to the continued decline in working hours brought on by lockdowns to curb the spread of COVID-19.

Clearly, there can be no global prosperity in a world where half of the workforce is without the means to support itself.

Sixteen years ago, the late Richard Smalley, Nobel laureate in Chemistry, challenged the world to provide 10 billion people by 2050 the level of energy prosperity we in the developed world are used to, in his Terawatt Challenge.  And with this energy, he said, the rest of the problems of the world from water, food, the environment, poverty, terrorism and war, disease, education, democracy and population are surmountable.

In order to provide the equivalent of 900 million barrels of oil per day, as Smalley called for, we would have to produce 60 terawatts (TW) a year.

Marc &Richard Perez, in their paper, A Fundamental Look at Supply Side Energy Reserves for the Planet,  estimated the global demand for energy will reach 27TW a year by 2050. And updated their previous 2009 estimate of the planet energy reserves with the following graphic. 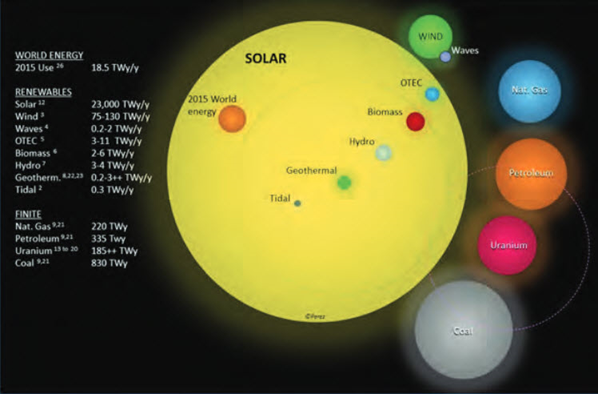 What the Perezs failed to acknowledge, however, was the annual heat accumulation being stored in the oceans, land and ice and the potential for thermodynamic geoengineering (TG) to meet the Perez’s 2050 goal and half of Smalley’s objective per the following.

The wind shown above is for scale and the ocean heat is based on the revised estimate of  Resplandy et al (2018), in RealClimate. The Land & Ice heat is prorated from the ocean heat depicted in the graphic below.

TG is 7.6% of the Ocean Heat per the calculation of Melvin Prueitt in his US patent 20070289303A1, heat transfer for ocean thermal energy conversion.

As shown below, the accumulation of heat in the ocean has been accelerating since 1990 but has existed since the birth of industrial revolution. 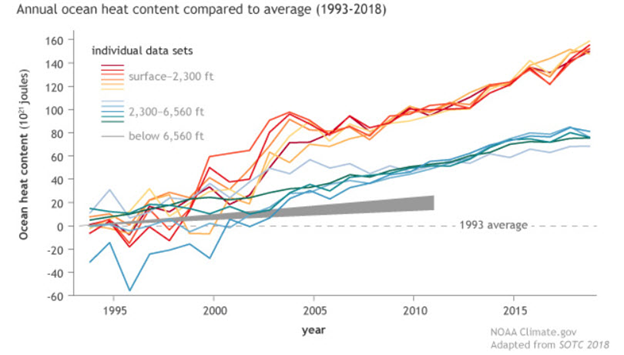 As shown in the following tables and graphics, TG can recycle this heat until it is totally consumed so, it is partially a finite resource that can provide renewable energy for thousands of years depending on how it is depleted on either a straight-line or declining balance basis.

In the latter case the resource provides diminishing returns since, after the heat of warming has been converted and radiated back into space, the ocean can continue to provide TG heat at a level of 14 TW in perpetuity with TG, which is at least twice as efficient as the OTEC shown in the Perez graphic.

The assumptions for the above are that it will take at least 50 years to build out the TG infrastructure and that it takes about 226 years for the heat relocated to deep water by TG to resurface. Therefore, the finite ocean heat resource is 226*384TW or 86,784, TW which is 3.8 times the annual solar energy depicted in the Perez graphic and 55 times the finite fossil fuel and uranium resources.

Deliverology is the science (or art) devised by Sir Michael Barber of Delivery Associates, and Dominic Barton, CEO of McKinsey Consulting, for delivering on goals and promises, made by governments. It relies on a clear identification of priorities; the setting of targets and the collection of data related to those priorities; and the exercise of central oversight through a unit reporting directly and regularly to the leader.

The following data for the environment is for Smalley’s fourth problem, where TG alone scores positively:

To produce a prosperity factor, the number of years the finite energies can be productive has to be divided by 29, the annual production of TG, and the fossil fuels have to be docked 20 percent to account for the energy required to sequester sufficient CO2 to keep their emissions within the two degree limit of the Paris accord.

So, the prosperity ranking below is for the next 3010 years, where any energy source greater than Smalley’s 60TW is redundant. 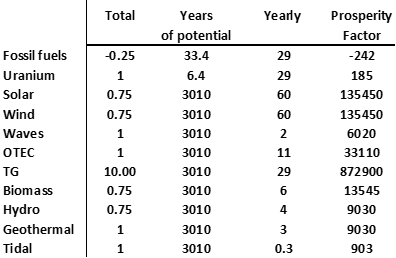 Although solar and wind are more abundant than TG for the next 3,000 years, the planet would prosper more with TG than the former due to waste heat that is produced by the former while TG is a conversion of heat that heretofore has been considered waste.

At least until the energy demands of the population exceed the annual 29TW potential of TG.

Bloomberg, today, reports, “Across continents, bond investors are struggling to answer what Deutsche Bank AG strategists dubbed “the question of our age” -- how much societies are willing to sacrifice in economic growth to counter climate change, and what that spells for the world’s $31 trillion sovereign debt market.”

The real “question of our age” is, why are bond investors, politicians and policy makers so obtuse about both the science and economics of climate change.

The only way to counter climate change is to stimulate the right kind of economic growth.