Per the proceeding graphic, the Nature climate change paper Food–energy–water implications of negative emissions technologies in a +1.5°C future says, scenarios for meeting ambitious climate targets rely on large-scale deployment of negative emissions technologies that include trade-offs between food, water and energy that could result in staple food crop prices rising by approximately fivefold relative to 2010 levels in many parts of the Global South.

Bill Winters, chairman of the Taskforce on Scaling Voluntary Carbon Markets said, “By scaling voluntary carbon markets and allowing a global price for carbon to emerge, companies will have the right tools and incentives to reduce emissions at least cost.”

David Keith, in a paper A Process for Capturing CO2 from the Atmosphere, estimated that cost at between $94 to232 tonne of CO2.

About, an additional 1,000 gigatons CO2 have been added to the atmospheres since 1780.

Larry Weiers, writer of the book  Sustainability Of The Modern Human Economy, in an articled The cost of Decarbonization: how much green to go green?, estimated the decarbonization of the  electrical sector would cost $112.5 Trillion dollars. And to do the same for the transportation and heating sectors would cost an additional $112.5 trillion a piece.

He pointed out, “there is good reason to believe the costs will decline over time, but it is very unlikely the job could be done for less than $100 trillion.”

“To help understand how much money this is, we can compare it to the world gross domestic product, or GDP, which is about $80 trillion annually. That is the total amount of money in the economy, so is an upper limit to what can be spent in a year.  Current expenditures for all energy are about $6 trillion/year,” he said.

Even if we decarbonized everything in 30 years and could do it for $100 trillion, the cost of energy is going to be 50% higher and what sectors of the economy are you going to sacrifice to the tune of $3 trillion a year?

Smalley reckoned that energy was the key to next nine concerns of man, which he ranked as water, food, environment, poverty, terrorism and war, disease, education, democracy, and population and the graphic above shows what decarbonization will do to the first two.

To reduce emissions and adapt to climate change we need cheaper energy, not more expensive energy and there are very few constant, renewable sources that can fill the bill.

Only Thermodynamic Geoengineering (TG) is the only one that is both affordable and maximizes the environmental benefit by reducing sea level rise, storm surge, ocean acidification, surface heat and CO2 off gassing from the ocean.

Instead of increasing energy costs by $3 trillion, this technology would decrease these costs by a minimum of that amount per the following.

Weiers estimated it would 100,000 square miles of solar panels, or a square 316 miles on a side to produce 18 terawatts.

Not only is TG a better use of the surface of the planet, it is by far a more efficient use of this area per the following. 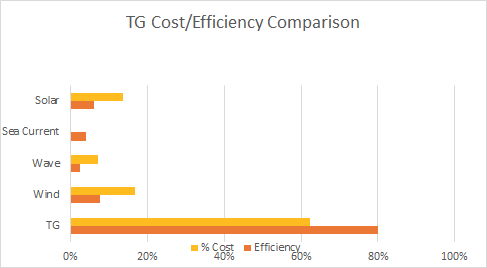 The details for the graph are available here and below.

The bottom line is, the decarbonization diet is too costly to swallow and a better environmental result can be obtained at far less cost.