Costs of Different Battery Storage Technologies Depend on Technical Characteristics 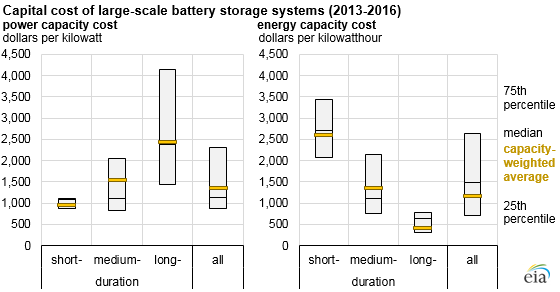 Capital costs for large-scale battery storage systems installed across the United States differ depending on technical characteristics. Systems are generally designed to provide either greater power capacity (a battery’s maximum instantaneous power output) or greater energy capacity (the total amount of electricity that can be stored or discharged by a battery system).

Power-oriented systems are shorter duration systems, meaning they are typically designed to generate large amounts of instantaneous power output but cannot sustain that output for very long. These systems have lower costs per kilowatt and higher costs per kilowatthour. For example, a $12 million battery system with a nameplate power capacity of 10 megawatts and nameplate energy capacity of 4 megawatthours would have relatively low power costs ($1,200 per kilowatt) and relatively high energy costs ($3,000 per kilowatthour).

Power-oriented systems are designed to provide grid reliability services such as frequency regulation, which requires large shifts in the power capacity in quick, sub-hourly intervals. Power-oriented battery systems are more prevalent in the PJM Interconnection than other regions and actively participate in PJM’s ancillary services market.