The energy industry is a high-regulated and high-risk domain. Strict regulations and legal, environmental, and social compliance concerns are fundamental. Corruption has one of the most undermining effects on your job as a compliance officer. So what are the distinct repercussions of corruption in this dynamic industry today?

Energy firms fear the risk of loss and wish to shield themselves from:

• Getting a costly problem that creates operational and supply chain inefficiencies.

• Being penalized by huge fines and compliance costs in the aftermath of a scandal.

As a compliance officer, you play the role of a gatekeeper in the energy industry to keep up with investigations, audits, and reporting.

It's not only about measuring and understanding corruption. It also matters to understand what works in anti-corruption policies which is much harder to study.

There is no empirical analysis or information about at what level corruption disrupts the energy firms. Is it local, city, or country level?

Also, it is important to differentiate between red tape or corruption. Sometimes bureaucrats are incompetent, but it doesn't mean they are corrupt.

International energy firms, especially oil & gas companies, face risks while using third parties. They can face disruptive investigations into allegations of bribery and corruption because of the actions of third parties acting abroad on their behalf. Often you must prepare for potential unethical conduct of local contractors, distributors, agents, and consultants.

Corruption and unethical behavior in the energy industry have an international dimension because often projects involve international actors. Investors, firms, and politicians both from Global South and Global North are in the game.

Prudent third-party due diligence is essential in mitigating those risks.

In tackling corruption, you must recognize red flags that show troubles ahead.

Key preconditions for corruption according to risk mapping in the energy industry: 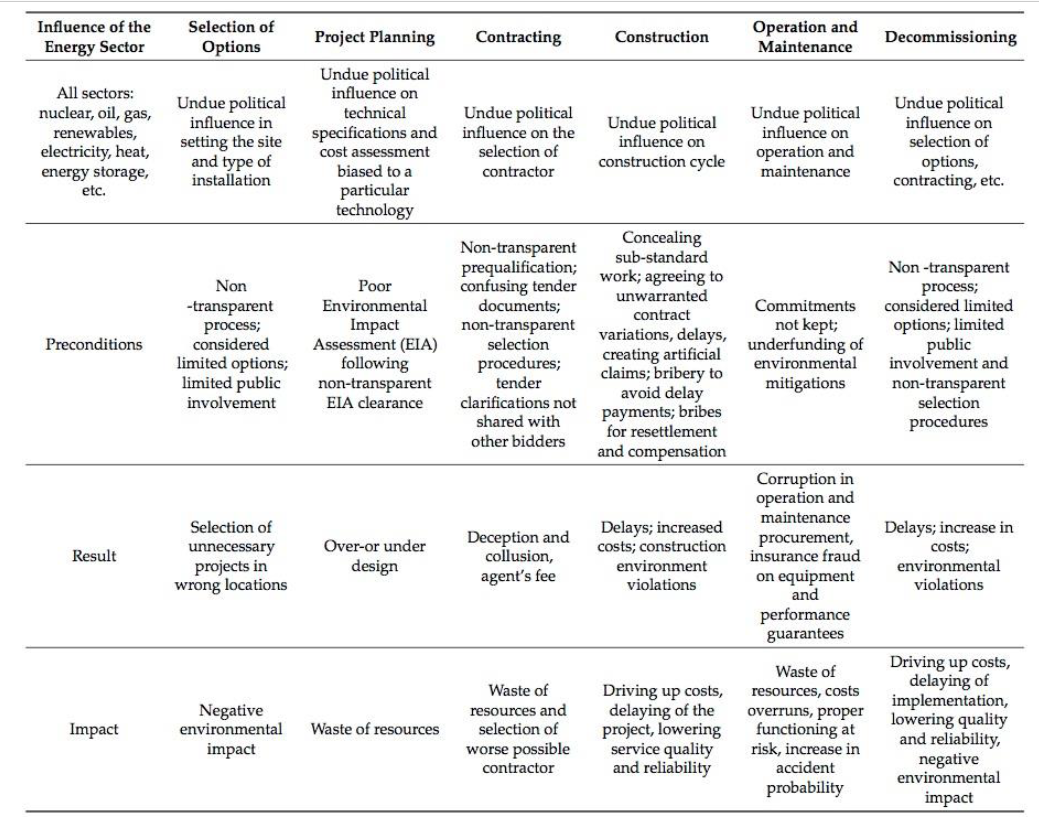 These preconditions may show up in all aspects of operations such as project planning, contracting, construction, operations & maintenance, decommissioning, etc. Watch out!

Corruption and unethical behavior in the energy industry have an international dimension because often projects involve international actors. Investors, firms, and politicians both from Global South and Global North are in the game.

For example, a former UK minister's family firm has been accused of breaching ministerial code to supply Uganda's government with solar power equipment. Sandip Verma's company, Nexus Green, signed two deals worth of £88m after meeting the president of Uganda. Other suppliers in the African solar power market were surprised because neither Lady Verma nor her son Rikki had previous experience in the industry. And the company didn't have a website! [clapping].

Transparency International hints that in a certain context the corruption slows the transition to greener energy. Some countries rich in natural resources have been plagued by corruption and mismanagement of these resources. Autocratic regimes of those ''resource cursed'' countries rather keep their grip on power by controlling conventional energy resources and limit renewable energy projects. Yes, climate change is a very sensitive topic there.

Once corruption occurs in these sectors following ultimate consequences are inevitable:

You need to be looking for new solutions in dealing with the challenges of compliance these days. Technology for integrity is impacting on energy industry too. Increased data volume and adoption of AI in digital compliance programs help to mitigate risks.

Regulators know the difference between who just talk compliance from those who do compliance. And it takes the right culture to do compliance. The creation of a sound compliance culture in a global energy company starts with training and endorsing a voluntary code of conduct. Only then digital technologies are effective.