Researchers from Chalmers University of Technology, Sweden, have found that graphene-based heat pipes can help solve the problems of cooling electronics and power systems used in avionics, data centres and other power electronics, but this is only the tip of the iceberg. The planet can be cooled the same way.

Heat pipes are one of the most efficient cooling tools because of their high efficiency and unique ability to transfer heat over a large distance.

The graphene enhanced heat pipe exhibits a specific thermal transfer coefficient which is about 3.5 times better than that of copper-based heat pipe. It is made of high thermal conductivity graphene assembled films assisted with carbon fibre wicker enhanced inner surfaces, which shows great advantages and potential for cooling of a variety of electronics and power systems, especially where low weight and high corrosion resistance are required.

The Chalmers researchers tested pipes of 6mm outer diameter and 150mm length but heat pipes as long as 1,000 meters have been envisioned for planetary cooling per the following:

One of the beauties of the conventional heat pipe is that it is a totally passive device. Heat is transferred from the hot end of the pipe to a cold one by the phase changes of the working fluid. The condensed vapor is then transported back to the hot end to complete the cycle by the capillary pumping of the fluid through a wick.

To date, the limits of capillary pumping have been demonstrated in nature by trees, the tallest of which is the Hyperion redwood at 115.7 meters tall, which releases as much as 160 gallons of water a day through its leaves by moving water up from its roots.

In the examples above, capillary pumping is supplanted by condensate pumps, which for a 100-megawatt plant using ammonia as the working fluid, as much as 9 cubic meters per second of anhydrous ammonia must be pumped through the system.

In the Michaelis example, the pumping is expedited by break tanks.

The Physcistoday article, “Transporting water to the tops of trees,” points out the maximum height of a column of water with a capillary diameter of 10 nanometres is three kilometres. And graphene nanotubes currently in development are between two and five nanometres in diameter, therefore, could support a column of water even higher.

Currently, however, the maximum length of a forest of carbon nanotubes is 15 centimetres as shown above, and as demonstrated by a team of Japanese scientists. So, there is considerable development to do yet to attain the full potential of capillary pumping.

In the Prueitt patent, the pumping losses for the system are 8 percent, half of which could be overcome by capillary pumping per the following, which shows a cross section of a heat pipe where vapour is descending and condensate returning through the outer graphene film and carbon fibre wicking. 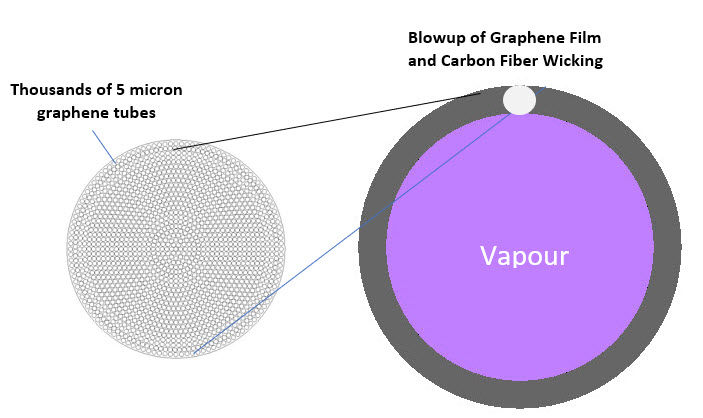 Ya Liu, Ph.D. Student at the Electronics Materials and Systems Laboratory at Chalmers explained, "The condenser section, the cold part of the graphene enhanced heat pipe, can be substituted by a heat sink or a fan to make the cooling even more efficient when applied in a real case." And the same applies to Thermodynamic Geoengineering, and the other deep-water condenser systems shown above, where a turbine can be inserted into the vapour flow of the heat pipe to produce power and the hot and cold ends of the heat pipe can be augmented by heat exchangers.

Besides just cooling the ocean surface with heat pipes, a significant part of the heat of global warming can be converted to productive work by these systems and the heat moved into deep water can be recycled once it resurfaces, as it inevitably will, as heat rises unless forced to descend by the pressure produced by the boiling vapour at the hot end of a heat pipe.

Graphene nanotubes can maximize this potential to convert the heat of warming to work and to sequester surface heat until such time as this conversion is complete.

If we depend on heat pipes to protect our electronics and power systems, why would we do any less for the planet?