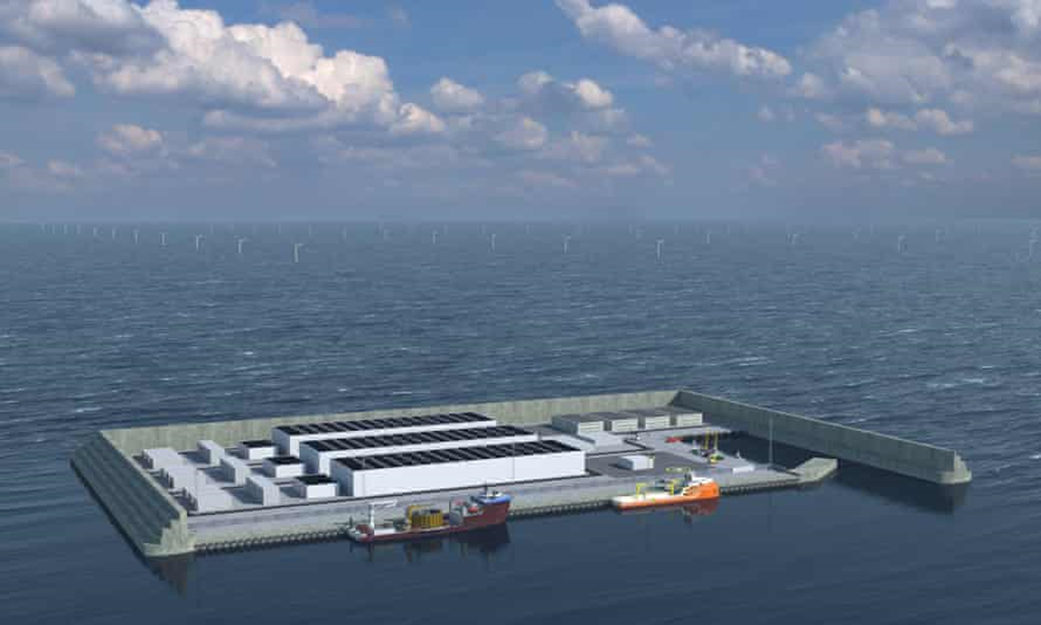 It has been reported Denmark has struck a USD $34 billion deal to provide a clean energy hub in the North Sea that would be the largest construction project in Danish history.

Situated 50 miles off the coast of the Jutland peninsula, the artificial island will provide storage and a distribution platform for 200 offshore wind turbines that can provide 3 gigawatts of electricity. The island will be 120,000 square meters and the wind turbines will have a sea surface to blade tip height of about 260 meters compared to the Eiffel Tower’s height of 324 meters.

A second plant is slated for the actual island of Bornholm in the Baltic which is slated to produce  2 gigawatts.

The artificial island is scheduled to be completed by 2030 but the plan is to scale this to 460,000 square meters that can gather electricity from some 600 turbines and produce as much 10 gigawatts. Which is over 5 times Denmark’s current offshore wind capacity with the excess slated for delivery to Belgium, the Netherlands and Germany.

The obvious takeaway from this announcement is the seldom discussed cost of backup for intermittent renewables like wind and solar. USD $34 billion/3,000 is  $11,333,333 per MW of storage, over and above the typical cost of $1.3 million per megawatt (MW) of electricity-producing capacity, which for the Danish project using 15 MW plants would be $19.5 million.

For 200 turbines this would be $3.9 billion or 1/11th the cost of the backup and distribution, which for batteries, according Notre Dame University, would have a life of only 12 years.

The Wallstreet Journal reports, “floating wind is almost double the cost of fixed offshore wind, which needs an average price of $84 per megawatt-hour of electricity for projects to break even”. Which at (84*2*24*365*15) =$22 million; is in line with the Danish project.

The following is a rendering of an Energy Islands as envisioned by the architects Dominic and Michael Michaelis. 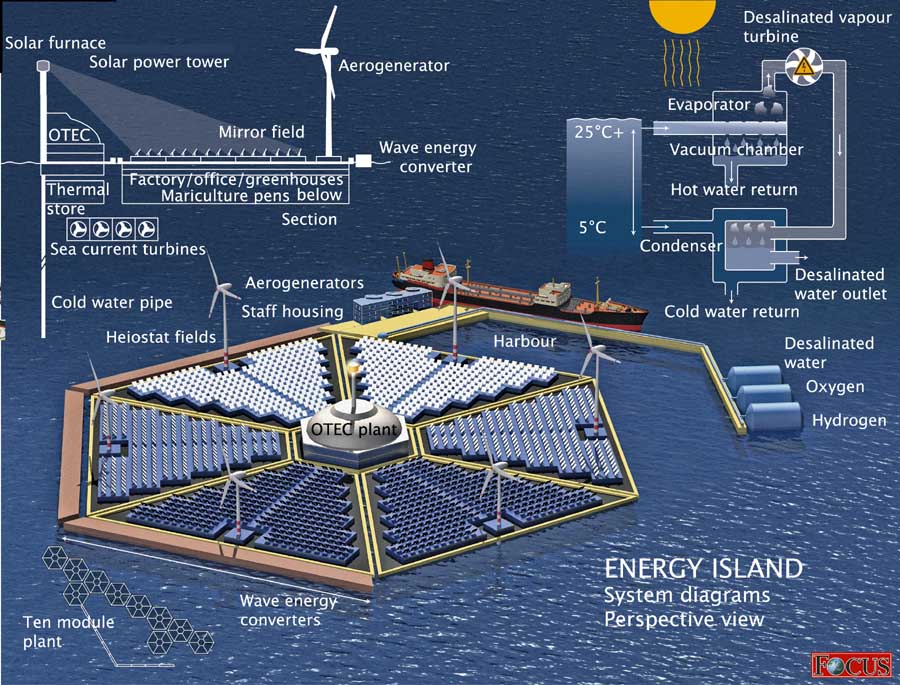 The basic island hexagonal plan is comprised of 6 equilateral triangles of 300 meters a side, for a total surface area of 234 000 square meters, or 23.4 hectares which Dominic Michaelis noted in a 2002 newsletter is sufficiently large to guarantee the island's stability in heavy seas.

For wind it is proposed that 3 low level and 3 high-level windmills would have a peak output of 18 MW.

For sea current energy, 5 cowled turbine assemblies 100 meters across are situated perpendicular to a constant flow to produce 10 MW.

Wave energy, with a 600 meter ocean frontage, 6 MW can be converted to hydraulic power.

A 22 hectare platform with an array of concentrating solar panels focused on a “Power Tower” is estimated to have an equivalent of 13.5 MW of continuous solar energy output. But the bulk of the solar energy and of the island in general, comes from ocean thermal energy conversion or OTEC.

As James Prescott Joule determined in his 1876 calorimeter a one kilogram weight dropped 427 meters raises the temperature of a kilogram of water one degree Celsius. The difference between the tropical surface and a depth of 1,000 meters is typically at 21°C which equates to a hydraulic heat of 8967 meter if 100% conversion were attainable. Since the efficiency of a conventional OTEC system is closer to 2.5% however, the height of a theoretical ocean thermal dam is closer to about 224 or 3 meters higher than the Hoover Dam which has an installed capacity 2,080 MW.

This is 8 times the assumed 250 MW output of Michaelis’ “on board” energy sources for his island. Which suffers from three drawbacks. First, it is a fixed platform and therefore cannot move to where the seasonal temperature between the surface and the deep water is greatest. Second conventional OTEC has low efficiency because of the large volumes of water that must be moved through the heat exchangers. Third, the wind, sea current, wave and concentrated solar energies are ancillary because the primary energy driver is the volume of water flowing through the heat exchangers which is governed by the frontal area facing the ocean  current that can reach 250 cm/sec or 4.9 knots for the Gulf Stream but in the deep vary from between only 2 to 10 cm/sec or less (< .2 knots).

In the Michaelis design, the evaporator is serviced by water flowing perpendicularly through the heat exchangers as well as by a patented Lilypad wave energy converter.

He also patented a Low Level Condenser that provides significant efficiency improvement but suffers from the loss of the Lilypad movement around the fins of the condenser.

OTEC efficiency tracks the Intertropical Convergence Zone which shifts seasonally as shown below in the following  University Corporation for Atmospheric Research gif.

So, to produce the maximum amount of energy from the resource nature provides, OTEC platforms must be able to move with the seasons.

The following is a design for a Thermodynamic Geoengineering platform. 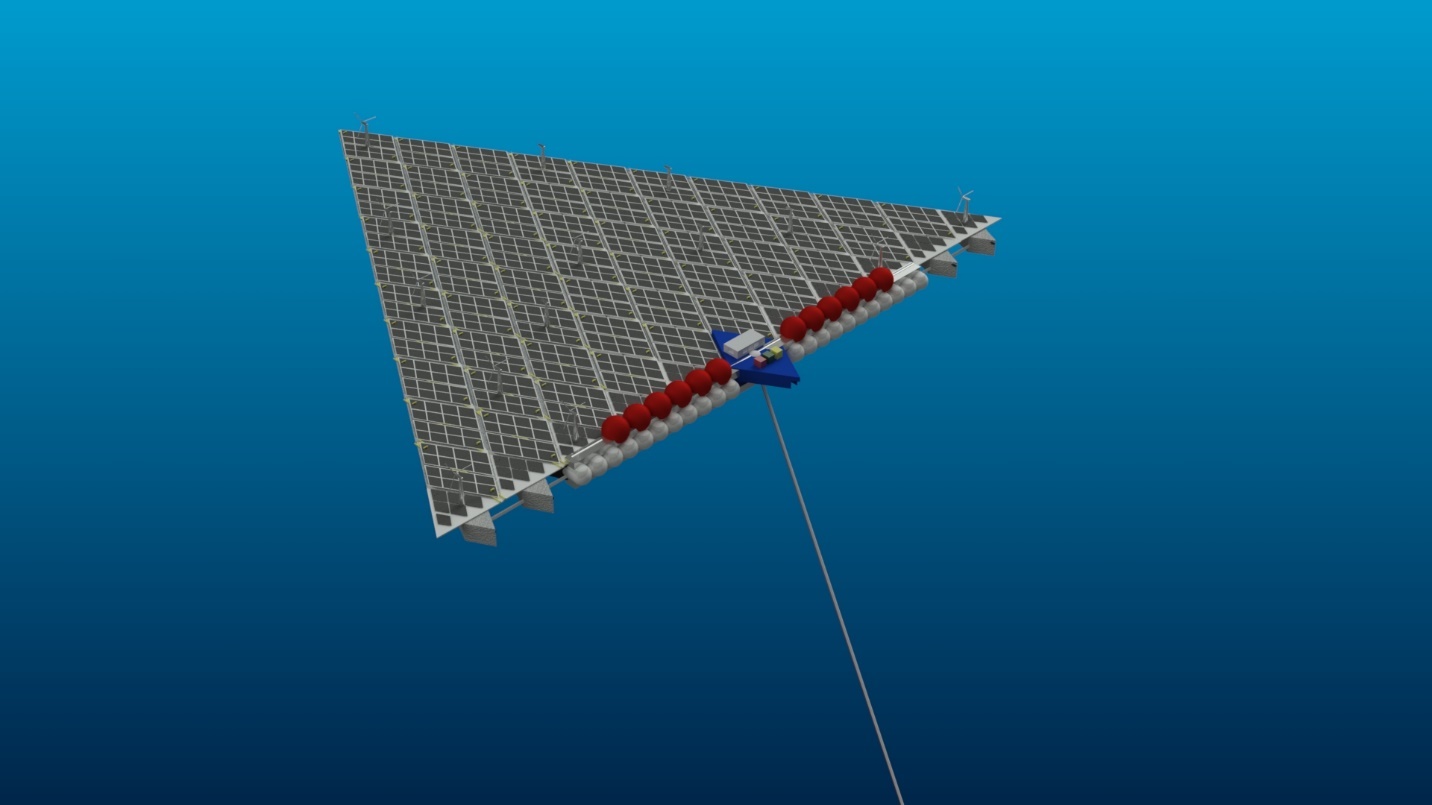 First it is streamlined, so it can move through the water in search of the highest ocean surface temperatures and presents a frontal area for the movement of warm water through the evaporators at the bottom end of the graphic below the red hydrogen storage tanks.

It is driven by impellers at the bottom apexes of the island at 2 knots by electricity provided from any of the onboard energy sources: wind, wave, solar or hydrogen.

The island is 735 meters on a side with the same surface area as the Michaelis island and can produce 250 MW of OTEC as well as much wind, wave and solar as Michaelis’ design.

The dimensions of the evaporators are derived from a proprietary database per the following form. 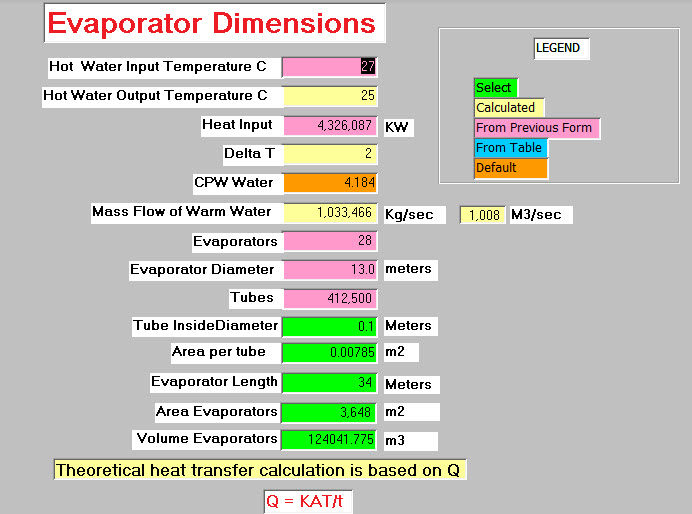 A major benefit of the design is the condenser cluster shown below and the electrolyzer for producing hydrogen at depth, which is dragged behind and below the island that doesn’t need any other motivation to move cold water through the condensers. 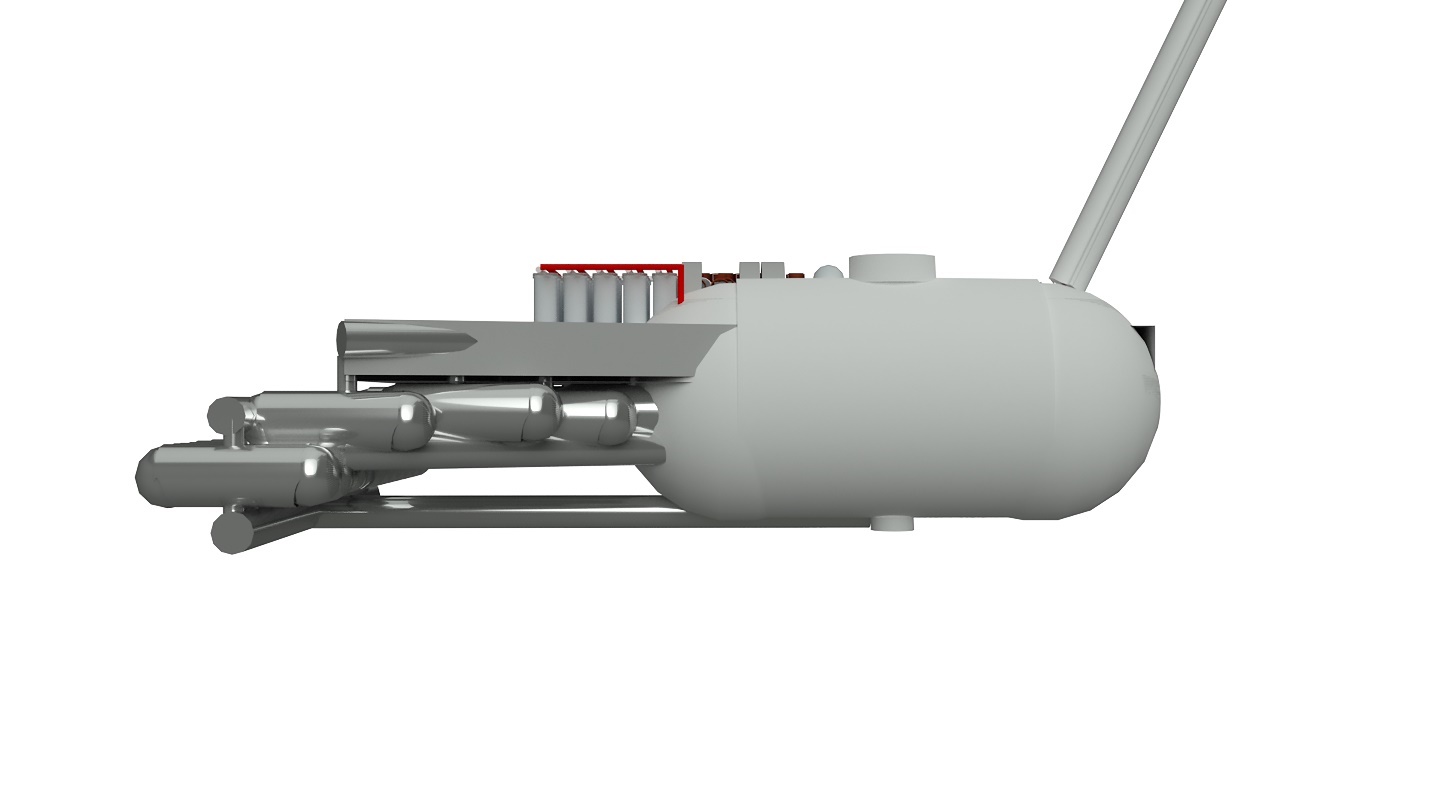 The following is another configuration for 29 evaporators that would produce 250 MW which is presents a frontal area of only 377 meters and a surface area of only 61544 sq meters that could reduce the cost of an island by as much as 55 percent. 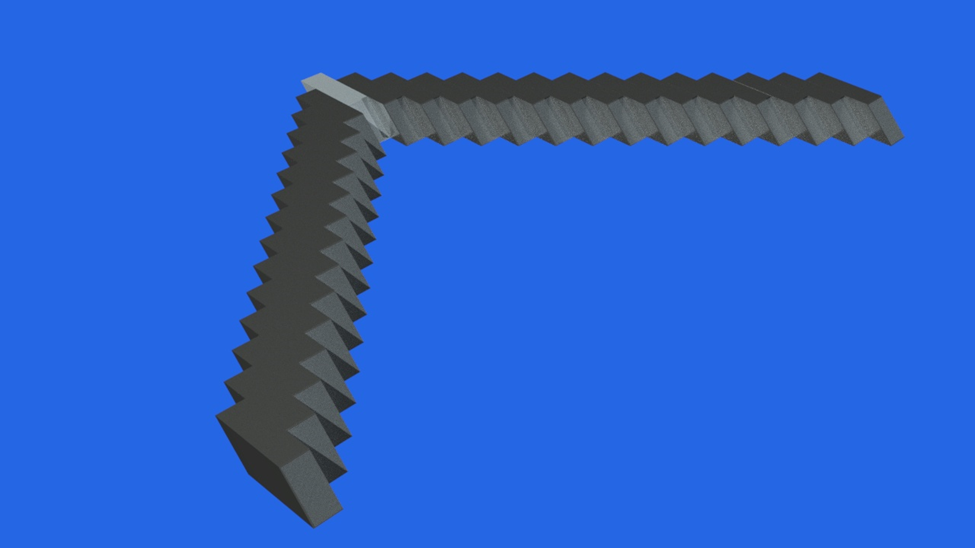 And the center of the triangle could be hollowed out so that no wind, wave or solar panel would be needed further reducing the system costs.

All that would be needed on the surface would be sufficient displacement to ensure the underwater infrastructure didn’t sink.

But the real question is, what are you getting for your energy dollar?

The IMF has told us, with fossil fuels, it is $5.3 trillion dollars of environmental misery every year.

Whereas wind and solar eliminates some of this, but they do nothing for surface temperatures, storm surge, sea level rise, drought, polar melting and ocean acidity.

For these you need Thermodynamic Geoengineering, which is worthy of an environmental bonus but can thrive on its own on a level playing field.

Mark Carney posed the question “with governments ploughing billions into keeping economies afloat, a question mark hangs over whether the recovery will be green enough,” in a recent BBC interview. And answered himself by saying, “the answer lies in a global pot of $170tn of private capital which, he says, "is looking for disclosure".

"When you look at climate change from a human mortality perspective, it will be the equivalent of a coronavirus crisis every year from the middle of this century, and every year, not just a one-off event. So, it is an issue that needs to be addressed now," he said.

We simply have to put private capital to work and stop looking at the environmental gift horse of Thermodynamic Geoengineering in its mouth.

I'd love to see quantified the advantages of these islands-- in terms of $ and energy-- that developers are anticipating to make these worthwhile. There's obviously something there or they wouldn't be pursuing, but what does it actually look like? And what are the potential environmental impacts-- is it better because it limits the spread of distribution assets on a wider basis, or is the larger size something that may be of concern?

Matt, Elon Musk likes to refer to Archimede's first principles, which he has conflated with batteries. The first principle of global warming, actually, is that it is a problem of thermodynamics. It is heat that needs to be converted to work.  As above, the Danes are building a great, expensive battery in the ocean that is an energy carrier, like hydrogen, ammonia and others that doesn't address the problem of global warming or convert it to work. The Michaelis' Energy Island is a whole lot of expensive ocean front property that only partially converts the heat of warming - about 80 percent. Most of  the island, the expensive part, collects wind, solar, wave and ocean currents. And only does this in a fixed location, whereas the sun shines on the equator at different times of the year. The Thermodynamic Geoengineering island is capable of moving to harvest the seasonal ocean heat and the cost is shown below. The larger the island lower the cost because the area of the island is dependent on the square of the side per the formula A = a² * √3 / 4,

Note the 10 module plan in the Michaelis graphic where the cost and output of the modules is linear.

The table above shows how the cost of Thermodynamic Geoengineering plants includes solar and wind but I believe these can be reduced with the stripped down model in the chevron formation of evaporators shown above which captures and converts 80  percent of the energy impinging on a given area ot the tropical surface.

What it looks like is shown in the  article.

"Is it better because it limits the spread of distribution assets on a wider basis, or is the larger size something that may be of concern? "

The larger the size the lower the cost.

The  more energy that is produced  this way the more the  surface is cooled and the other environmental hazards that are eliminated.