Isuru Seneviratne has 15 years’ experience as a finance professional, specializing in energy investment and sustainable development. From 2004–2015, Isuru was an analyst at the...

In 2011, German Chancellor Angela Merkel announced the country was turning away from nuclear energy in favor of a renewable future. Since then, however, progress has been limited. Berlin has wasted billions of euros and resistance is mounting.

This is a (long but) great article on Germany's disastrous Energiewende project.

"Germany's Federal Court of Auditors is even more forthright about the failures. The shift to renewables, the federal auditors say, has cost at least 160 billion euros in the last five years. Meanwhile, the expenditures 'are in extreme disproportion to the results,' Federal Court of Auditors President Kay Scheller said last fall, although his assessment went largely unheard in the political arena. Scheller is even concerned that voters could soon lose all faith in the government because of this massive failure."

Germany sabotaged their own efforts in two main ways, in my opinion.

1) killing nuclear before killing coal (or oil, or gas)

2) not rewarding its' citizens for their carbon virtuousness, underpinned by steadily rising price on carbon price.

"In Sweden -- the Energiewende world champion, according to the International Energy Agency -- a high CO2 tax, of almost 120 euros per ton, is driving people and companies to pay more attention to how they heat, drive and do business. The tax was first introduced there in 1991. In Germany, the debate has only just begun."

Looks like regular old partisan misalignment is playing a big part as well:

"Politicians like former Environment Minister Jürgen Trittin, a Green Party politician who was part of the cabinet of the center-left Social Democratic (SPD) Chancellor Gerhard Schröder, were in favor of a radical shift, no matter what the cost. Others, like the SPD Economics Minister Sigmar Gabriel and his successor Peter Altmaier, from Merkel's center-right Christian Democrats (CDU), were more concerned about German industry and job numbers. Neither side trusted the other and a stalemate ensued. Progress halted."

Most of Germany's Energiewende seems to have been driven by huge subsidies courtousy of the rate-payers, not a market-driven systemic transition. Germans pay 1.7x per kWh vs. France despite their much dirtier grid. 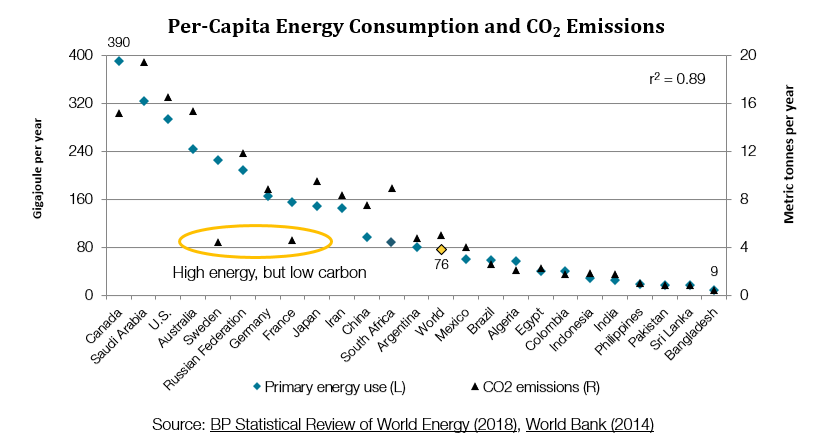 "The state has redistributed gigantic sums of money, with the EEG directing more than 25 billion euros each year to the operators of renewable energy facilities. But without the subsidies, operating wind turbines and solar parks will hardly be worth it anymore. As is so often the case with such subsidies: They trigger an artificial boom that burns fast and leaves nothing but scorched earth in their wake."

The authors point out the problems with the emissions trading system and promotes carbon taxes that are largely returned to citizens:

"Intelligent systems are important. But incentives for individuals and companies to act in environmentally friendly ways are even more important. And that's where price matters. The more expensive the production of CO2, the more worthwhile it becomes to invest in climate-friendly technology."

"Berlin policymakers are currently leaning toward a model like the one used in Switzerland, in which a large portion of the CO2 tax revenues is sent back to citizens as compensation for the fact that climate-neutral behavior can be expensive and requires sacrifice. That's the core lesson of more than two decades of the Energiewende: Policymakers must ensure that people are on board. Voters must begin to understand what the transformation means for them and that it is vital that they change their behavior."

larry commented on ...
We Are Living in a Climate Emergency, and We’re Going to Say So

Reminds me of the latest version of "the day the earth stood still". We know the problems, but the solutions are unobtainable until...

Matt commented on ...
We Are Living in a Climate Emergency, and We’re Going to Say So

a bold move that I applaud but I expect will be controversial amongst CC deniers.

Bob commented on ...
Is Wind the Next Nuclear? What the nuclear stagnation tells us about the challenges that lie ahead for wind energy

"After all, don’t people in The Netherlands and Denmark generally accept much higher densities of wind farms?"

Bob commented on ...
Is Wind the Next Nuclear? What the nuclear stagnation tells us about the challenges that lie ahead for wind energy