A new paper by researchers from a number of institutions, but including the Stockholm Resilience Centre and the Potsdam Institute for Climate Impact Research, has made headlines in many on-line and print media outlets in recent days. 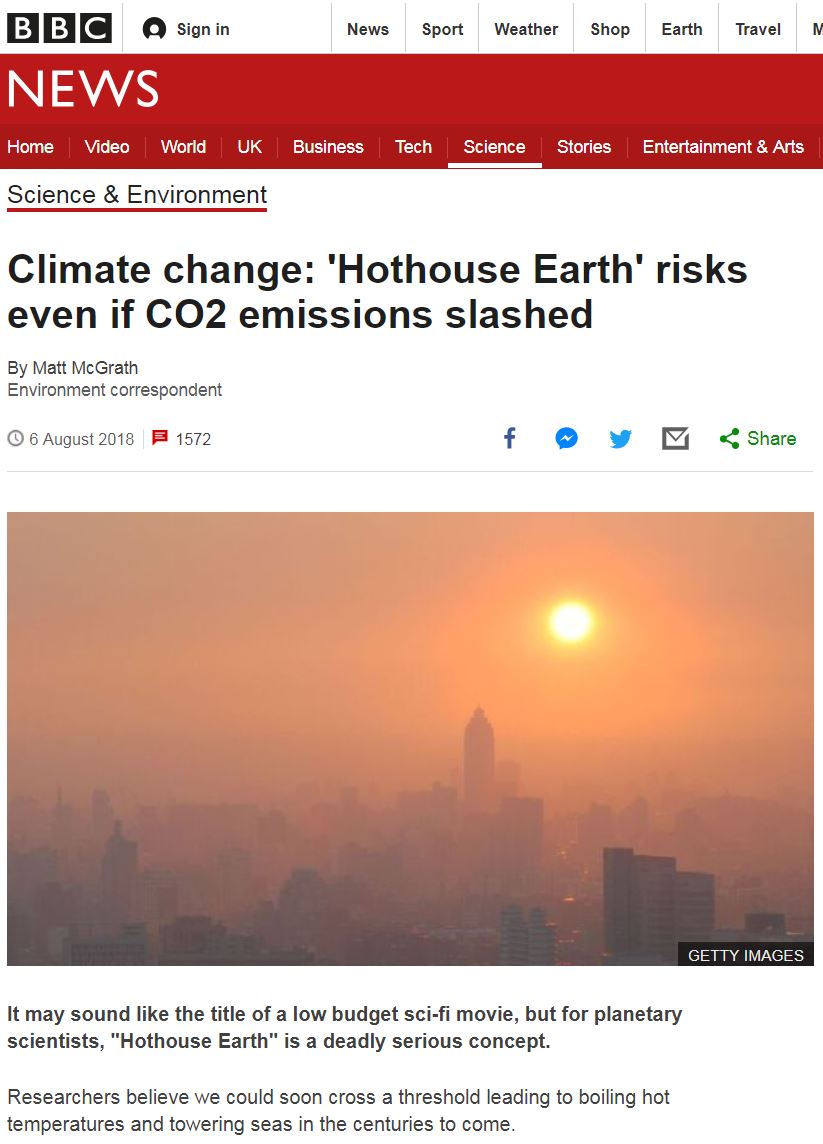 The paper warns of the possibility of a ‘hothouse earth’ condition, which arises due to current warming forcing the existing Glacial-Inter-glacial Cycle to flip to a new cycle characterized by much warmer temperatures. In the opinion of the authors, the flip could occur because of known but uncertain feedback effects in the climate cycle, such as permafrost thawing, rain-forest die-back and increased bacterial respiration in the ocean. 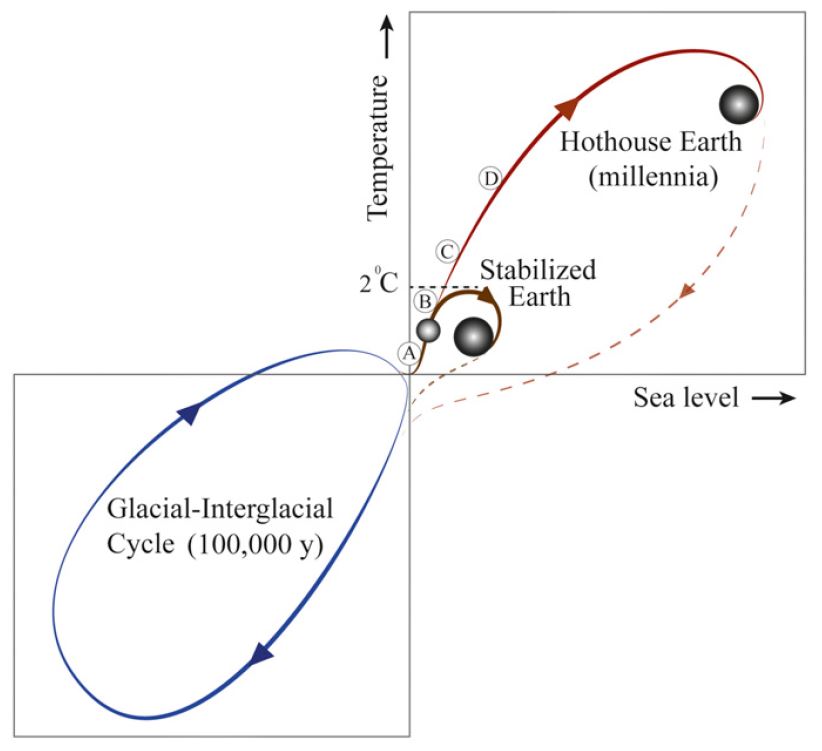 A similar story in The Atlantic notes that the hothouse conditions of the Eocene, which experienced average global temperatures 9-14°C higher than current conditions, were characterized by carbon dioxide (CO2) levels of at least 1000 ppm, a level that could conceivably be reached early next century if no mitigation actions are forthcoming. The author of The Atlantic article argues that if we do, in fact, push CO2 up to around 1,000 ppm by the end of the century, the warming will persist and the earth will continue to change for what, to humans, is a practical eternity. And when the earth system finally does arrive at its equilibrium, it will most likely be in a climate state with no analogue in our short evolutionary history.

Based on an analysis of the Eocene and other periods (A, Mid-Holocene; B, Eemian; C, Mid-Pliocene; and D, Mid-Miocene are shown in the illustration above), it would appear that high temperature outcomes are possible. It’s not unreasonable to explore such a proposition, although the media reporting of it had few caveats in terms of understanding this risk.

That risk can be visualized (chart below) by looking at work done in 2009 by the MIT Joint Program on the Science and Policy of Global Change which I discussed in a recent post. Their analysis demonstrated that even a modest attempt to mitigate emissions could profoundly affect the risk profile for equilibrium surface temperature. They looked at five mitigation scenarios, from a ‘no policy’ approach to a very stringent climate regime (Level 1, akin to a 2°C case). In the ‘no policy’ approach, mid-range warming by the end of the century is some 5°C compared to the late 20th century, but with a wide distribution, which means that there is a small probability of warming up to 8°C or more – an unacceptably high outcome even when accounting for the small probability that it might occur. In probability distribution terms, this is known as a ‘long tail’. It is shown in black on the right-hand side of the chart below and stretches out to 10°C, or Eocene levels of warming. 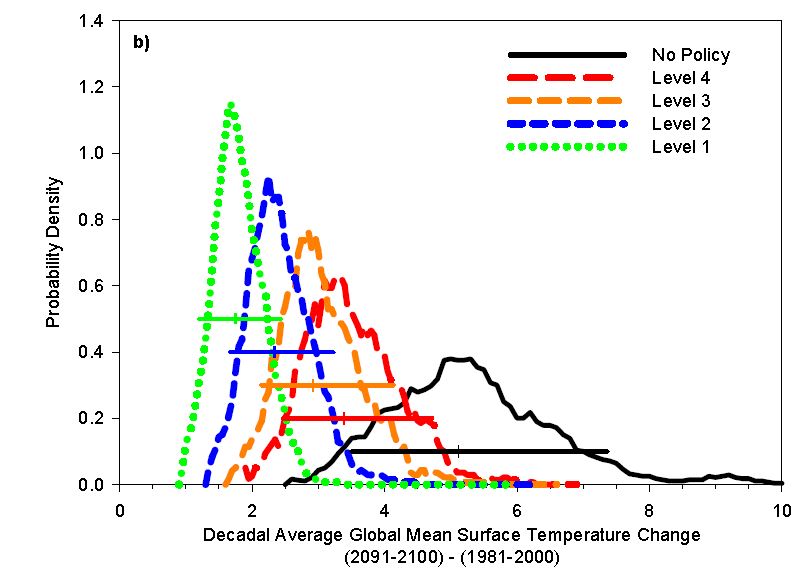 But even modest mitigation efforts, while not shifting the mid-range sufficiently for an outcome close to 2°C, nevertheless radically change the shape of the distribution curve such that the spread narrows considerably, with the highest impact outcome dropping by some 3-4°C. As mitigation effort increases and the mid-range approaches 2°C, the distribution narrows further such that the highest possible outcome is limited to 3°C.

While low risk, high impact outcomes might seem overstated by some and certainly cause a few to retreat to a position of defense (e.g. climate skepticism), even a very small chance of a very large impact event is not something that can be ignored. Rather, that risk must be managed. As surface temperature rise is largely a function of cumulative carbon added to the atmosphere, then risk management should focus on the goal of net zero emissions, otherwise carbon dioxide levels in the atmosphere will continue to rise, even if emissions are much lower than today. In that case the risk persists.

A question to consider when reading the Hothouse Earth paper, is whether we are now beyond the ‘no policy’ outcome, which means that the long tail risk associated with a no mitigation scenario has been managed to some extent at least. With energy technology development proceeding at the pace it is, in combination with the Paris Agreement’s nationally determined contributions and emission targets, policies and goals implemented sporadically by cities, states, countries and regions, there is reason to consider that a path towards net-zero emissions is now unfolding, albeit gradually (see below, the UNFCCC analysis of INDCs, published in May 2016). That pathway is still far from one which equates to well below 2°C, but it could be one that mitigates the long tail impact. 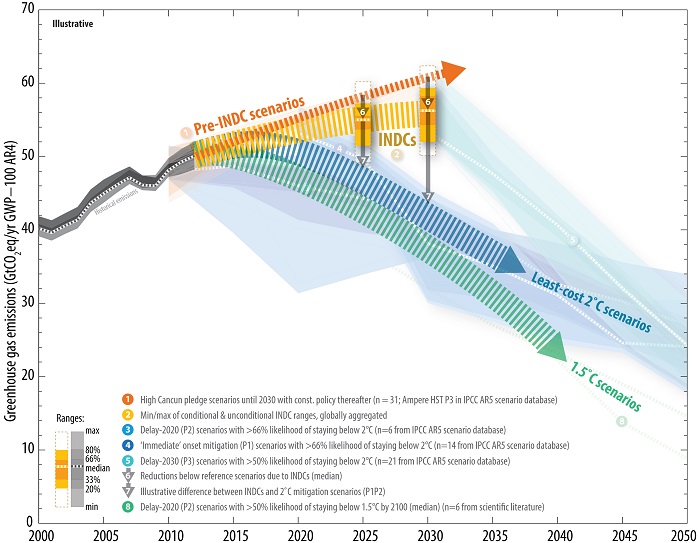 The authors of the Hothouse Earth paper argue for rapid and significant mitigation action, in combination with other measures to improve the stewardship of the entire Earth System. While that call should not be ignored, it is also important not to lambaste early but incomplete progress; it represents an important starting point for the eventual destination. It also helps mitigate long term risk, a critical requirement that is often overlooked in the search for the perfect solution.

David, Shell's Sky Scenario is highly dependent on CCS - a hypothetical, unproven, unprofitable technology which your company expects to spring into existence sometime in the near feature to undo the damage it's doing to climate.

Assuming mitigation could possibly stop carbon emissions from increasing - a tall order in itself - reliance on CCS would require 40 billion tons of CO2 to be sequestered annually to to achieve net-zero emissions. It's a goal presently four orders of magnitude out of reach, with net-zero evidence it could ever reach three.

Perhaps the answer lies in "other measures to improve the stewardship of the entire Earth System," whatever that means. Or perhaps Shell's scenario would be more aptly named "Pie in the Sky".

it would seem we can't just reduce contributions but also we must claw down much of the carbon already in the atmosphere, one such path is Biochar, a world wide movement, - here is some good news from China, - I don't have the source but I do know Katherine Draper, she is from Ithaka in Germany and I have spken to her, she would not have her name on anything untrue.

"This is a $2 million 30 kiloton per year biochar plant. It takes 100000 tons of crop wastes and stops them from rotting or being burned, avoiding two major sources of greenhouse gas, and makes biofertilizer that reduces the use of chemicals and earns the average farmer 150-250 yuan ($20-40) more per day from produce. Each sack of biofertilizer is a dollar cheaper than chemical fertilizer. China built 20 of these this year, one every 3 weeks. It is just starting. 45 more are under construction, 200 planned. Simple, scalable, shovel ready. Megatons of carbon removed from the sky, made into charcoal and buried. Albert Bates with IBI Board members Dr. Genxing Pan and Kathleen Draper. September 2018" ( The Biochar reactor was $2 Million, the whole plant $50 million, equivalent Biochar reactor in the US is app. $8. million.

Geoff, if it costs $50 million to build a facility that will remove 30 kilotons of carbon from the air, to offset the 10 gigatons of carbon emitted by burning fossil fuels we'd have to build 333,333 plants at a total cost of $16 trillion.

And that's the least of biochar's problems - until we have an idea how much fossil fuel is burned to process the biochar and bury it, build the factories, and maintain them, for all we know we could be creating more emissions than before.