Wind/solar power and battery electric vehicles (BEVs) truly are celebrities in the energy world. They are constantly in the news and have a wide range of dedicated fan-sites following their every move. Also, since wind and solar generate electricity directly and BEVs can utilize electricity very efficiently, many people believe these technologies are highly complementary. 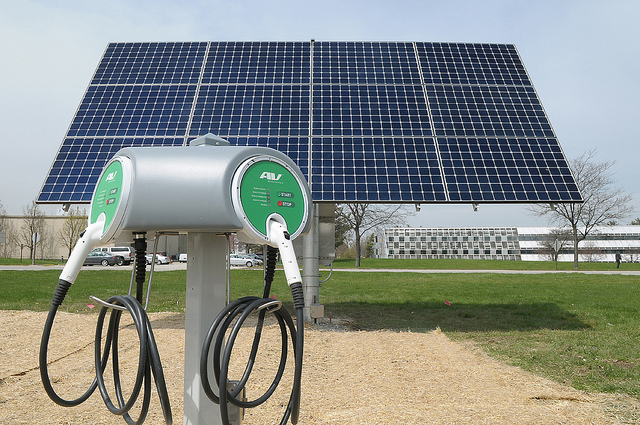 This assumed synergy between intermittent renewables and electric cars is a big part of what I would call "the electrify everything strategy" that is very popular at the moment. Since wind and solar produce electricity directly, it makes sense that most final energy consumption will be in the form of electricity in a future wind/solar-dominated energy sector. This sounds great at first glance, but several serious problems emerge upon further inspection.

The fact is that we are very far from the electrify everything ideal at present. As seen below, the latest IEA data for the year 2015 show that electricity accounted for a mere 18% of global final energy consumption. When considering that we have less than 20 years left in our 2 °C carbon budget, this is a big problem for the electrify everything strategy.

As outlined in an earlier article, this low share is an important reason for scepticism about current wind/solar technology-forcing policy frameworks, the two other prominent reasons being wind/solar intermittency and the poor correlation between wind/solar availability and population density.

A truly synergistic connection between intermittent renewables and electric cars has the potential to significantly boost electrification, while simultaneously alleviating the intermittency problem. As shown below, transportation is currently totally dominated by oil, leaving lots of potential for diversification.

Battery electric vehicles (BEVs) are best deployed as passenger light-duty vehicles, which account for only a quarter of global oil consumption. Even in this segment, the economic attractiveness of BEVs fades quickly for longer-distance applications.  Hence, it is difficult to see BEVs displacing more than 10% of oil consumption without large perpetual subsidies.

Even if we get a technological breakthrough (i.e. $30/kWh fully installed battery packs with 1 kWh/kg specific energy made from truly abundant materials) and BEVs eventually supply 50% of transportation energy, there will still be a very long way to go in the electrification journey. As shown below, transportation accounts for only 28% of final energy consumption, and this share is likely to drop with increased electrification and general efficiency.

Still, a synergistic relationship between BEVs and intermittent renewables will certainly increase the potential impact of both technologies.

By far the most attractive BEV usage pattern is slow charging at night for driving during the day.  From a practicality standpoint, such a night charging regime is highly convenient for owners. From an economic point of view, this usage pattern requires only a cheap slow charger installed at home and does not need any grid expansion because load is generally lowest at night (see below). The need for a smart system ensuring that charging only happens during the early morning hours may add a moderate cost though.

The primary challenge with trying to find synergies between intermittent renewables and electric cars is that this will enforce a departure from this night charging pattern. Charging electric cars primarily during times of high wind/solar output will inevitably be much less convenient and require much more expansive charging and grid infrastructure.

For wind power, output is simply too unreliable and variations occur over too long timescales. It is not uncommon to have several days of strong winds followed by several days with almost no wind. Trying to match electric car charging with such widely varying electricity production will simply be far too impractical. 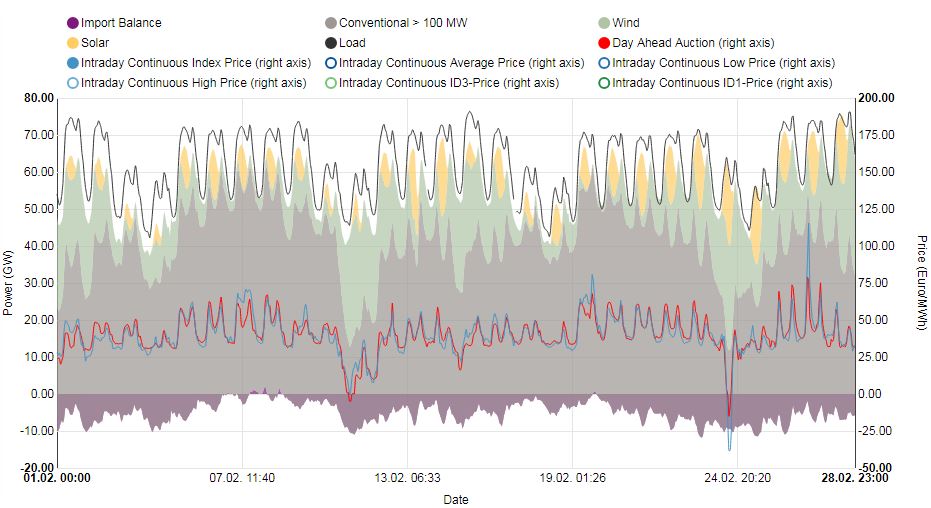 However, night charging of electric cars will help to increase minimum load, thereby reducing curtailment during windy nights. But there will also be many windless nights where night charging and wind output are completely misaligned.

When looking at solar, it is obvious that the correlation with night charging of electric cars is zero. In fact, electric cars in a solar-dominated system will need to be charged in the middle of the day. This will be much less convenient than night charging because many vehicles are in use during this time and it can be troublesome to find a convenient longer-term parking spot with a charger every day. This charging pattern will only suit the most economically inefficient of all travelling modes: the single-person-in-car rush-hour commute.

Daytime charging will also be much more expensive. Firstly, a solar dominated system will need to construct countless public smart chargers so that most cars can be charged around noon when solar output is strongest. This will be much more expensive than a simple home changer, especially when new underground wiring needs to be installed to connect public chargers to the grid.

More importantly, daytime charging will increase peak load, requiring expensive grid upgrades. Furthermore, countries that are located away from the equator will see large seasonal changes in solar output, requiring people to charge cars during the day at public chargers during the summer and at home during the night during winter. Cloudy days will cause additional inconvenience and capacity under-utilization in a solar daytime charging plan.

Baseload generators have a much clearer positive interaction with electric cars. Night charging of BEVs will flatten the daily load profile, allowing for the installation of more baseload capacity instead of load-following capacity.

Baseload generators operated at maximum capacity factor have significantly lower LCOE than load-following generators. In addition, since no grid upgrades will be required to distribute additional night-time electricity, fixed grid costs can be spread over a larger quantity of electricity. These two factors can allow BEVs to significantly reduce the average electricity cost in a baseload-dominated system.

Excess wind and solar power is better suited to centralized H2/synfuel production than BEVs. A power-to-gas plant will be much better equipped than electric cars to increase electricity consumption whenever wind/solar output happens to be high.

Furthermore, a power-to-gas plant can be connected directly to the transmission network, circumventing the need for expensive upgrades to the distribution network to feed excess wind and solar power to millions of distributed public chargers.

Due to their sizable efficiency losses, power-to-gas plants require very low electricity prices (~$20/MWh) to be profitable, but, as discussed in an earlier article, such prices will be commonplace already at fairly moderate market shares of wind and solar power. It is doubtful that wind and solar generators can be profitable under these conditions, but with continued wind and solar technology-forcing policies, this certainly is a possibility.

Cost and value decline in wind and solar power estimated in a previous article.

Ironically, a large increase in wind and solar power (solar in particular) will maintain the dominant role of fuels in the transportation sector. In such a scenario, internal combustion engines and fuel cells have a bright future.

Solar power is totally misaligned with the convenient and economic night charging BEV usage pattern and is therefore incompatible with widespread BEV deployment. Power-to-gas plants are better suited to capitalize on excess wind and solar power to generate affordable synfuels for the transportation sector.

Electric cars are fundamentally best suited to a baseload-dominated electricity sector. In such a power system, a large fleet of BEVs charging primarily at night can significantly reduce the average electricity cost to consumers.

In summary, nuclear proponents can reasonably promote electric cars in parallel to nuclear plants. On the other hand, it makes little sense for wind and solar proponents to promote electric cars. Parallel technology-forcing of intermittent renewables and electric cars significantly increases the likelihood of getting stuck with a highly complex, expensive and only partially decarbonized energy sector supplied by perpetually subsidy-dependent wind/solar and BEV companies.