Can You Make a Wind Turbine Without Fossil Fuels?

Various scenarios have been put forward showing that 100% renewable energy is achievable. Some of them even claim that we can move completely away from fossil fuels in only couple of decades. A world entirely without fossils might be desirable, but is it achievable?

This is what a typical wind turbine looks like:

What is it made of? Lots of steel, concrete and advanced plastic. Material requirements of a modern wind turbine have been reviewed by the United States Geological Survey. On average 1 MW of wind capacity requires 103 tonnes of stainless steel, 402 tonnes of concrete, 6.8 tonnes of fiberglass, 3 tonnes of copper and 20 tonnes of cast iron. The elegant blades are made of fiberglass, the skyscraper sized tower of steel, and the base of concrete.

For the sake of brevity I will only consider whether this steel can be produced without fossil fuels, and whether the concrete can be made without the production of carbon dioxide. However I will note at the outset that the requirement for fiberglass means that a wind turbine cannot currently be made without the extraction of oil and natural gas, because fiberglass is without exception produced from petrochemicals.

Let’s begin with steel. How do we make most of our steel globally?

There are two methods: recycle old steel, or make steel from iron ore. The vast majority of steel is made using the latter method for the simple reason that there is nowhere near enough old steel lying around to be re-melted to meet global demand.

Here then is a quick summary of how we make steel. First we take iron ore out of the ground, leaving a landscape looking like this: And the machines that do all of this work are almost made entirely of steel:

What powers these ships? A diesel engine. And they are big:

Simple engineering realities mean that shipping requires high energy dense fuels, universally diesel. Because of wind and solar energy’s intrinsic low power density putting solar panels, or perhaps a kite, on to one of these ships will not come close to meeting their energy requirements. We are likely stuck with diesel engines for generations.

We then convert this iron ore into steel. How is this done? There are only two widely used methods. The blast furnace or direct reduction routes, and these processes are fundamentally dependent on the provision of large amounts of coal or natural gas. 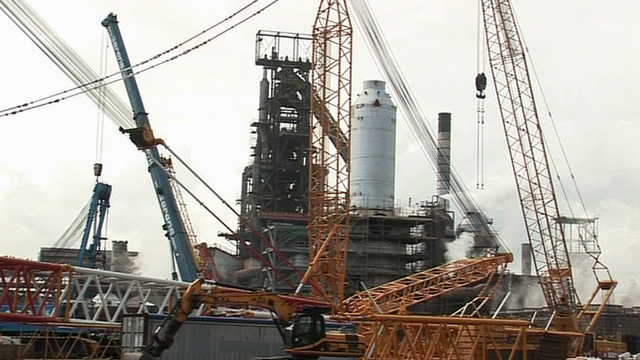 The blast furnace route is used for the majority of steel production globally. Here coal is key. Iron ore is unusable, largely because it is mostly iron oxide. This must be purified by removing the oxygen, and we do this by reacting the iron ore with carbon monoxide produced using coke:

This steel can then be used to produce the tower for a wind turbine, but as you can see, each major step of the production chain for what we call primary steel is dependent on fossil fuels.

By weight cement is the most widely used material globally. We now produce over 3.5 billion tonnes of the stuff each year, with the majority of it being produced and consumed in China. And one of the most important uses of cement is in concrete production.

We make cement in a cement kiln, using a kiln fuel such as coal, natural gas, or quite often used tires. Provision of heat in cement production is an obvious source of greenhouse gases, and providing this heat with low carbon sources will face multiple challenges.

These challenges may or may not be overcome, but here is a more challenging one. Approximately 50% of emissions from cement production come not from energy provision, but from chemical reactions in its production.

Total cement production currently represents about 5% of global carbon dioxide emissions, to go with the almost 7% from iron and steel production. Not loose change.

In conclusion we obviously cannot build wind turbines on a large scale without fossil fuels.

Now, none of this is to argue against wind turbines, it is simply arguing against over-promising what can be achieved. It also should be pointed out that we cannot build a nuclear power plant, or any piece of large infrastrtucture for that matter, without concrete or steel. A future entirely without fossil fuels may be desirable, but currently it is not achievable. Expectations must be set accordingly.

Sustainable Materials With Both Eyes Open – Allwood and Cullen