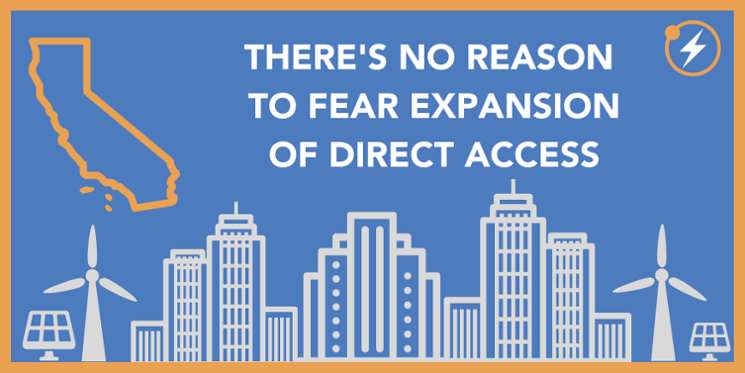 For years, large companies in California have been calling for expansion of Direct Access (DA), California’s limited retail choice program for commercial and industrial customers. Retail choice allows customers to shop around, rather than relying on their local electric utility. It also allows large customers to meet sustainability commitments by procuring more renewable energy than the utility provides. Such corporate purchases have driven development of renewable energy in markets that allow retail competition, and for that reason AEE and the Advanced Energy Buyers Group have jointly supported the expansion of DA in California. That expansion could be coming, if recommendations contained in a California Public Utility Commission (CPUC) report on extending DA to all nonresidential customers are acted upon by the California Legislature. But the expansion is more likely to happen – and happen faster – if some misplaced worries in the CPUC report were put to rest.

For many customers, who delivers electricity and where it comes from don’t matter; but for some customers, especially large energy users like members of the Advanced Energy Buyers Group, the option to shop for different offerings from different service providers is a high priority. That opportunity is generally only available in states that restructured their electricity markets starting in the 1990s, moving away from vertically integrated utilities, which control both generation and distribution, to a retail choice market, where utilities are responsible for distribution of electricity but don’t own power generators. Where retail choice is available, customers can choose their electric provider and service options much like they do a cell phone plan. Large commercial and industrial (C&I) customers increasingly pursue retail choice options not only to save money but to gain access to renewable energy, which can provide price stability and help meet corporate goals.

California is among a small number of states that straddle the line between a fully restructured and vertically integrated market, allowing retail choice for some, but not all, electricity customers. The state’s partially restructured status has its origins in the aftermath of the Energy Crisis of 2000-2001, when the number of customers taking service from competitive electric service providers under retail choice shrank and DA was effectively frozen in time, with no new customers allowed to participate.

Like other partially restructured states, California is host to a lively and long-lived debate about whether, when, and how to expand DA to meet the demand of customers now shut out of the program. That debate has been punctuated by several pivotal developments, most notably the passage of two key bills by the California Legislature, SB 695 (Kehoe, 2009) and SB 237 (Hertzberg, 2018). SB 695 ordered a small DA expansion, setting a cap at the level of DA prior to the electricity crisis (roughly 13% of total load in the state) and allowing some additional C&I customers to switch over to competitive supply via lottery. In light of a consistent and significant waiting list of customers seeking to participate in DA nearly a decade later, SB 237 directed an initial 4,000 GWh expansion of the DA cap (roughly 2% of total load) and also required that the CPUC provide the legislature with recommendations for a full expansion of DA to all nonresidential customers in California.

Separate from DA, the state in 2002 authorized the formation of “Community Choice Aggregators” (CCAs), which provide service to all customers in a particular geographic area on an opt-out basis. While CCAs differ from DA in important ways, both policies reflect a move away from exclusive investor-owned utility (IOU) service and toward a more competitive retail market.

In addition to authorizing an initial reopening of DA, SB 237 directed the CPUC to provide recommendations to the legislature on additional expansion of DA. Specifically, the legislation required the CPUC to consider a phased approach to DA expansion and required that any recommendations align with California’s climate and air quality goals. These recommendations also had to ensure grid reliability and prevent cost shifting between utility customers that continue to buy electricity through the utility and utility customers that participate in DA.

After much anticipation, CPUC staff released its draft report to the legislature in late September. Notably, the report makes three overarching recommendations regarding the reopening of DA to nonresidential customers:

In comments and reply comments, AEE and AEBG agreed with staff on the benefits DA can provide, including increased customer choice, more tailored energy services for sophisticated customers, lower energy costs, and better alignment with corporate greenhouse gas reduction goals. In additional, our comments supported appropriate CPUC authority to ensure that retail suppliers meet their regulatory requirements, including the right to pull the plug on providers that fail to comply.

However, the report also identified a number of concerns about reopening DA that we consider misplaced – and which might make the legislature unnecessarily hesitant about going forward with DA expansion altogether. Chief among these concerns, CPUC staff suggested that expanding DA will threaten the state’s ability to reliably serve customers and meet ambitious clean energy and climate goals. In addition, speculating, based on incorrect and misleading information about performance, that competitive retailers may fail to comply with new regulations requiring long-term contracting, the report also raises the concern that expanding retail choice will make it more difficult to anticipate what energy resources are needed to maintain resource adequacy. But this issue is not unique to DA; it is a hallmark of California’s energy market as it becomes increasingly competitive. This is a case of a physician treating a patient’s symptoms rather than the underlying illness.

The cure here is not to cast doubt on DA expansion, but rather to provide better planning to ensure resource adequacy and policy compliance in an increasingly complex California electric power system. In fact, CPUC already has a number of ongoing proceedings to shore up reliability as resource mix and market realities shift. For these reasons, a wide array of stakeholders in the proceeding – including AEE and AEBG – voiced support for a faster timeline to reopen Direct Access, and asked that some of the conditions for reopening be clarified. Specifically, we suggested moving forward with the proposed gradual DA reopening starting in 2022 rather than 2024, and asked the CPUC to avoid making DA reopening contingent upon compliance with all requirements by all retail providers. Bad actors should be held accountable, but providers doing business in good faith should not be closed out as a result.

What happens next is for the Commission to review the comments, finalize the report, and deliver its recommendations to the California Legislature. We hope that the CPUC will see that holding off on DA expansion will neither avoid nor solve the concerns raised in the draft report – and that the corporate demand for renewable energy merits steady expansion of DA. As the DA debate moves from staff to Commission to legislature, AEE and AEBG will remain engaged to support customers’ ability to seek out advanced energy solutions that meet their needs.

What would major stimulus investment in advanced energy technologies and services mean for California? Click below to download economic impact reports on California and seven other states.