Contact
Follow
Profile
More than 270,000 California residents experienced a second round of rolling blackouts on Saturday. PG&E said rotating outages began around 6:30 p.m. Power was restored to most customers around 9 p.m., PG&E said. California ISO declared a Stage 3 Electrical Emergency around 6:28 p.m. due to increased demand, as well as the loss of a 470-megawatt power plant. There was also the loss of nearly 1,000 MW of wind power. The heat wave throughout the area increased electricity usage, leading to the strain on the power grid for the second night in a row. The last time rolling power outages
Read More
Brian Wang

Due to California's "duck curve", gas generation must increase very fast as the sun sets - up to 2GW/hour, and depending on consumption and available storage, gas can't be delivered fast enough. So instead of letting gas plants run out of fuel, CAISO cuts electricity on part of the grid. To soften the blow, they cut it to different parts each day, known as "rolling blackouts".

Below is a graph of today's Supply Trend from the California Independent System Operator (CAISO). Because CAISO apparently wants to make Californians believe solar, wind and batteries provide more electricity than they do, they display them on separate graphs, with exaggerated scales. They don't display demand on the same graph, either, so I've taken the liberty of adding it for perspective (the top aqua line).

As you can see, batteries don't add very much to the overall electricity mix. You can't see the "batteries" line? Neither can I. That's because the maximum contribution today was less than 100 MW, for a few minutes before noon. So little, it wouldn't appear from behind the baseline (if you rounded to zero, you'd be more right than wrong). 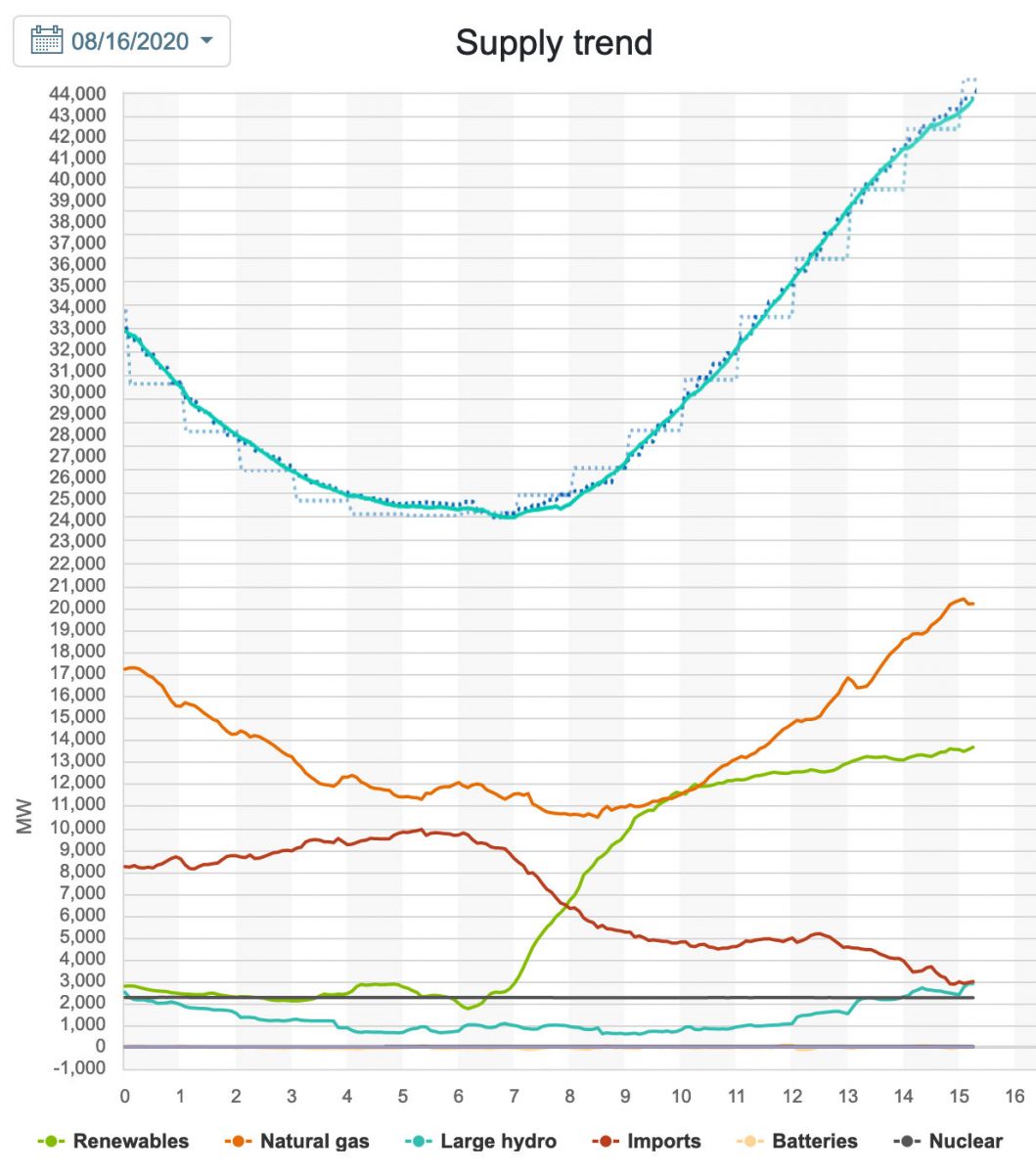 You may wonder what's generating the electricity designated "Imports" (fittingly, the line is colored brown). I wondered, too. It's electricity generated out of state, and - surprise! At various times, it may be up to 40% coal.

"Knowing Your Power", from the Center for Sustainable Energy:

"The law, as amended in 2009, allows retailers to characterize a portion of their power as coming from “unspecified” sources. Statewide, that represents more than 14 percent of the delivered electricity; for Southern California Edison, that number has exceeded 40 percent. And the power in this category is not just any electric generation – the unspecified category is dominated by imported power that is likely to include output from the dirtiest generators serving California markets."

"In addition, while the law authorizes the California Energy Commission to collect data about generation from every power plant on an hourly basis, it only requires retail providers to tell their customers about annual average usage of each fuel type. Perhaps equally important, the Energy Commission does not perform an audit to ensure the accuracy of the information it is providing."

To call California's "Clean Energy Transition" a scam would be being kind. All commissioners for both the California Energy Commission and California Public Utilities Commission are appointed by one man - Governor Gavin Newsom - a man with significant investments in, and campaign contributions from, purveyors of natural gas.

Sad, but California's "renewables" schtick is all about selling fossil fuel.

Mostly agree with you here Bob... CAISO/CPUC have taken a gamble over the last couple of years and they are losing their bet.

Here is trend for NG capacity in CA over the last few years... 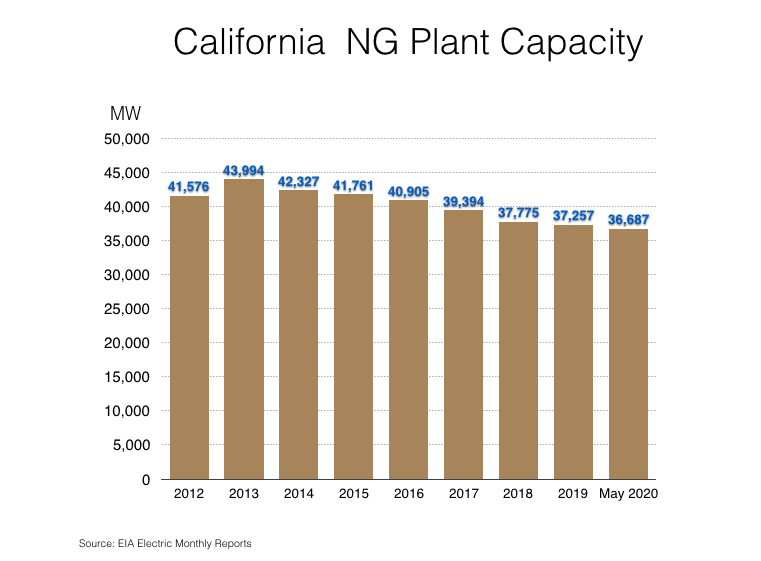 Note: this does not translate directly to CAISO as some of the capacity in the above graph would be used by municipal utilities (LADWP,SMUD,etc...) and therefore not on CAISO grid.

As you said, not much battery storage has been implemented yet. I think there is maybe 300-400MW on CAISO. That said, the developers who built out a small portion of their projects and got capacity on the grid this year are making a killing over the last few days.

I think this will mean that other developers will "speed up" their projects and make sure they are on grid by next summer. We'll see.

"That said, the developers who built out a small portion of their projects and got capacity on the grid this year are making a killing over the last few days."

That said - do you believe battery developers should be paid $thousands per megawatthour (New York Times) to recycle, and waste, grid electricity? They're being paid by captive electricity customers with no choice in the matter.

And should ratepayers be forced to pay the capital cost of battery installations - costs that exceed those of all existing storage by two orders of magnitude - just to be able to make a significant contribution to grid generation? Then bear the same cost to replace them every 7-10 years?

To those renewables, natural gas, and battery developers who are "making a killing" at customers' expense - I don't know how your sleep at night, but you belong in prison.