The 2018 special report of the Intergovernmental Panel on Climate Change says humanity can still limit global warming to 1.5 degrees Celsius, but to do this it must actively remove greenhouse gases from the atmosphere and reduce emissions to nearly zero.

The petroleum industry claimed it could extract carbon dioxide from the atmosphere and pump it into the geologic voids produced by the extraction of their product to produce more oil, which was never going to actively remove carbon dioxide from the atmosphere or reduce emission to nearly zero. Nevertheless, the Japanese,  the U.S. Department of Energy and the State of Texas invested US $1 billion in the Petra Nova project near Huston that attempted to disprove the laws of thermodynamics and thus, not surprisingly, was mothballed a week ago for economic reasons.

As Amy Harder of Axios pointed out, oil (and natural gas) prices need to be high to force behavioral change on behalf of businesses and consumers but high oil prices often compel politicians into imminent crisis mode so they're not thinking about longer-term climate policies. And when prices are too low, it makes it harder for more expensive technology to compete with fossil fuels.

BP which halved its shareholder dividend and posted a $6.7bn quarterly loss has announced it is preparing to sell a large chunk of its oil and gas assets even if crude prices bounce back from the coronavirus pandemic because it wants to invest more in renewable energy.

But what renewable energy?

“Currently available battery technology is prohibitively expensive for long-term energy storage services for the power grid and that alternative technologies that can store a few weeks’ to a month’s worth of energy for entire seasons or even multiple years may be the key to building affordable, reliable, renewable electricity systems,” they said.

They ignored thermodynamic geoengineering, the affordable, long-duration storage that can convert and recycle the thermally stratified energy of the ocean for millennia.

Shell, which  reported a company-record $18.1 billion second quarter loss, says it is pivoting to selling more gas, less oil and pressing into the clean power sector to address its economic woes.

Heidi Vella of power-technology.com and others have noted natural gas is a bridge to nowhere.

“As the cost of renewable energy falls and global economies set their sights on achieving net zero emissions targets, recent reports have found that up to $1 trillion of gas assets are at risk of being stranded,” Vella says.

The following graphic by ReThink Energy demonstrates why this is the case. 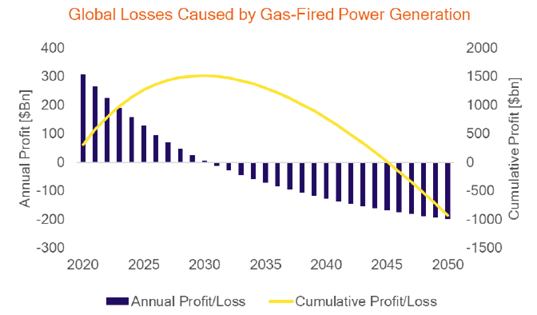 If we can’t count on fossil fuels, wind or solar to provide affordable energy, what is left, fusion or fission?

These are each producers of copious amounts of waste heat that Qinghan Bian, in his paper Waste heat: the dominating root cause of current global warming claims is the source of the warming problem.

Even if that weren’t true today, it will be soon.

The Rule of 72 is a simple way to determine how long an investment will take to double given a fixed annual rate of interest. By dividing 72 by the annual rate, investors get a rough estimate of how many years it will take for the initial investment to duplicate itself.

This also works for energy growth so, for 4%, it takes only 18 years for the growth to double so, in 118 years we will be experiencing as much warming from waste heat as we are experiencing today as a consequence of global warming.

Bian concluded, as has this writer, that switching to 100% of surface renewable energies is the ideal solution to the warming problem, but, what with backing up wind or solar with long-duration storage being too expensive and the problems with the other alternatives noted above, we are left only with the constant renewables shown below:

But cost isn’t everything. We not only derive great benefits from energy, it also, particularly in the case of fossil fuel burning, does great harm.

The trick is to maximize the former and eliminate the latter which includes land and waterway and groundwater degradation, air pollution, surface heating, increased drought and inundation, sea-level rise, more intense storms and wildfires and ocean acidification.

By some estimates, the environmental cost of burning of fossil fuels effectively wipes out the benefit derived from the burning and in the cases of surface heat, drought and inundation, sea-level rise, storm and wildfire intensity and acidification, thermodynamic geoengineering is the only antidote.

The paper Evaluation of a proposal for reliable low-cost grid power with 100% wind, water, and solar, authored by an international group of experts, which was a rebuttal to the paper of Mark Jacobson et al., entitled  Low-cost solution to the grid reliability problem with 100% penetration of intermittent wind, water, and solar for all purposes says, “A number of analyses, meta-analyses, and assessments, including those performed by the Intergovernmental Panel on Climate Change, the National Oceanic and Atmospheric Administration, the National Renewable Energy Laboratory, and the International Energy Agency, have concluded that deployment of a diverse portfolio of clean energy technologies makes a transition to a low-carbon-emission energy system both more feasible and less costly than other pathways.”

This article suggests the opposite is true.

The international group says of the Jacobsen paper, “In summary, the reliability of the proposed 100% wind, solar, and hydroelectric power system depends centrally on a large installed capacity of several different energy storage systems.” And that “the energy storage capacity consists almost entirely of two technologies that remain unproven at any scale: 514.6 TWh of underground thermal energy storage (UTES) (the largest UTES facility today is 0.0041 TWh) and 13.26 TWh of phase change materials (PCMs); effectively in research and demonstration phase.”

Instead of UTES, what is needed is thermodynamic geoengineering, which is “ocean” thermal energy storage and the phase change materials required are the low-boiling-point working fluids of the heat pipes that move the heat of warming from the ocean surface into deep water through the phase changes of the working fluid.

We need to go big or go home.

Thermodynamic geoengineering platforms need to be at least 100 megawatts to be economically viable and the larger they are the cheaper they are and the more effectively they address the problem.

Pouring money into solutions that aren’t effective is not only a waste of scarce resources, it ensures that those resources aren’t available to address the other needs of society.

Politicians and policy makers need to acknowledge that we are in an imminent crisis and start thinking long term.

Like 3,000 years ahead, which is the time it will take to convert and recycle the heat of global warming into useful work.