Battelle Energy Alliance (BEA) has initiated contract negotiations with a team led by Bechtel National Inc. to support the design and build phase of the Versatile Test Reactor, a one-of-a-kind facility that would support research and development of innovative, clean nuclear energy technologies.

The BNI team also includes TerraPower and GE Hitachi Nuclear Energy. The decision reflects the early stage of engagement these firms have had with the project.

The announcement comes after BEA, the contractor that operates Idaho National Laboratory for the U.S. Department of Energy, and members of the VTR technical team reviewed submissions by industry teams in response to a Request for Proposal issued earlier this year.

After careful review of multiple high-quality proposals, BEA selected the BNI-led team to start contract negotiations. INL manages the VTR project on behalf of DOE’s Office of Nuclear Energy.  The negotiations will cover technical scope, schedule, cost, and the other normal elements of a major engineering procurement construction (EPC) effort.

While no cost estimate has been made public, the Department of Energy will need major funding in the order of at least several billion to build the reactor.  Once operational, it will become the kind of anchor facility, that the INL has sought for the decades since the Integral Fast Reactor which was shut down in the 1990s.

INL Excited About the Future

“We received excellent proposals from industry, which is indicative of the support to build a fast-spectrum neutron testing facility in the United States,” said Mark Peters, Idaho National Laboratory director.

“We are excited about the potential for working with the BNI-led team. They will bring a lot of design and construction expertise to the VTR project. This is essential since it has been several years since we built a test reactor in the United States.”

Background to the Decision

DOE’s Office of Nuclear Energy established the VTR program in 2018 in response to several reports outlining the need for a fast spectrum test reactor and requests from U.S. companies developing advanced reactors. Currently, there are very few capabilities available for testing fast neutron reactor technology in the world and none in the United States.

In 2018, Congress passed the Nuclear Energy Innovation Capabilities Act (NEICA), which highlighted the need for a reactor-based fast neutron source and authorized DOE to proceed.

DOE Confident the VTR Can Be Built

Dr. Rita Baranwal, assistant secretary for DOE’s Office of Nuclear Energy, said it is important for the VTR project to move forward.

“The VTR team led by INL has established a solid foundation upon which the design phase can begin,” Baranwal said.

“We have repeatedly heard from industry and other stakeholders that the United States needs a fast neutron scientific user facility to maintain our global leadership in nuclear energy. The selection of the BNI team with its TerraPower and GE Hitachi partners, puts us firmly on the path toward building this important infrastructure capability.”

“We are looking forward to successful negotiations with the BNI team and want to make sure the project is ready to go in Fiscal Year 2021,” said Kemal Pasamehmetoglu, executive director of the VTR project.

Instead of producing electricity, the Versatile Test Reactor would conduct irradiation testing for fuels, materials, and equipment to be used in rapidly evolving designs for advanced reactors brought forward by U.S. companies, as well as public and private research institutions.

The INL-led team is also supporting the development of an Environmental Impact Statement that will be used to assist the Department in making the final decision on the design, technology selection and location for VTR. The final decision is expected in late 2021.

History of the VTR

In August 2019 the INL received a charter from DOE to establish the National Reactor Innovation Center. It is a test and demonstration center for new nuclear technologies and it will involve public / private partnerships with firms that want to bring these technologies to a mature enough level to attract investors and customers.

INL is a U.S. Department of Energy (DOE) national laboratory that performs work in each of DOE’s strategic goal areas: energy, national security, science and environment. 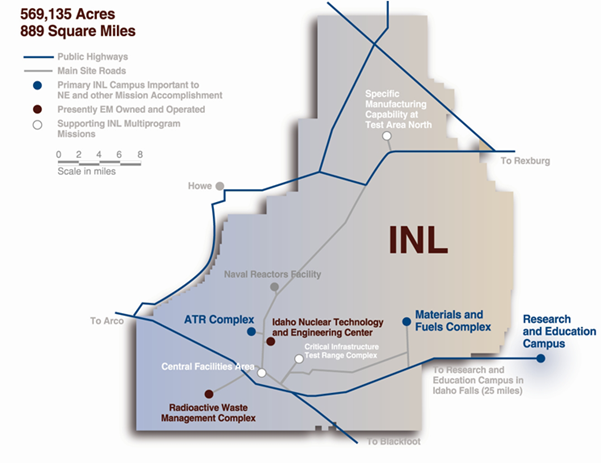 INL is the nation’s center for nuclear energy research and development. Day-to-day management and operation of the laboratory is the responsibility of Battelle Energy Alliance.

Secure, baseload generation has been the main selling point of nuclear power for decades: the promise of a reliable source of electricity, generating constantly around the clock, 24/7, has mesmerised UK energy policymakers since the first civil..

David commented on ...
Climate Policy in the Biden Era: Déjà vu All Over Again?

Interesting perspective but in my humble opinion presumes a sudden shift in environmental policy is unquestionably a good thing.

"No doubt PV with batteries will work out better in California than most of the US, but it will still demand a much larger fossil fuel component than

Great conversation here-- and some more great thoughts recently shared by Rakesh on the topic here:

Is there any concern that an overreliance on the voluntary measures is simply passing the buck?