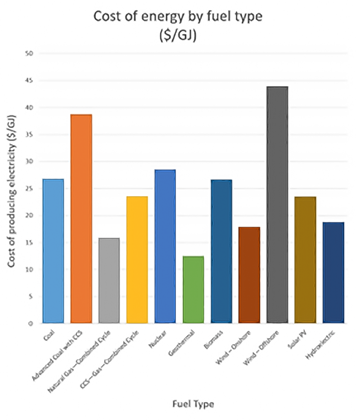 The cost of energy is the ultimate expression of whether the establishment is interest in the public’s interest or its own.

The International Monetary Fund found the implicit global subsidy from undercharging for energy and its environmental costs in 2017 was US $5.2 trillion, or 6.5 percent of the global gross domestic product (GDP). About $500 billion of this total was in direct subsidies and the remainder was the environmental costs.

Considering the World Bank estimated the global GDP per unit of energy for 2017 was 8.2 percent of the global GDP, the economic benefit derived from the energy consumed that year was effectively only $1.4 trillion.

The public is therefore deriving only 20 cents to a quarter’s worth of the economic benefit from every energy dollar spent, which is problematic considering, as the late Richard Smalley, 1996 Nobel Prize Laureate in Chemistry, in his Terawatt Challenge, reckoned energy is the  single most important issue facing society and is the key to solving the next of its nine challenges, which he categorized as water, food, environment, poverty, terrorism and war, disease, education, democracy and, population.

With the right energy source, environmental costs can be zeroed, and the savings can be distributed instead to the other priorities.

The professed aim of a carbon tax is to increase the cost-competitiveness of alternative energy sources and to lower greenhouse-gas emissions.

Instead of making energy more expensive, thermodynamic geoengineering produces energy at a quarter of the current cost, leaves room for enormous profits and the opportunity to address the other ills of mankind while rendering the question of emissions mute.

Levitus et al. in a paper, World ocean heat content and thermosteric sea level change (0–2000 m), 1955–2010, showed that if the heat that entered the ocean during the study period was instantly transferred to the lower 10 km of the global atmosphere it would result in a volume mean warming of that layer by approximately 36°C. Which would be the consequence of a “net zero” moon shot that in reality would be just another government boondoggle.

Negative emissions CO2 ocean thermal energy conversion could drawdown atmospheric and ocean carbon dioxide levels to preindustrial levels in as little as 7 years, but without greenhouse gases there is nothing to keep stored ocean heat from rapidly migrating into the atmosphere and creating the next extinction event.

To prevent such an outcome, it is necessary to recycle ocean heat over 13 226-year cycles that render the heat of warming harmless.

The Canadian Energy Research Institute and the Oxford Institute for Energy Studies calculate that the breakeven cost of getting Canadian LNG to Asian markets is between $8 and $10 per million BTU.

The current spot price for LNG is closer to $2 per million BTU.

Which compares to the Kwh cost for thermodynamic geoengineering plants of between $.01084 and $.004258 per the following.

Beside providing the lowest  cost energy, thermodynamic  geoengineering provides the environmental benefits of; surface heat relief, sea level  and storm surge reduction because heat in the deep can’t melt icecaps or produce storms, and heat at a depth of 1,000 produces half the thermal expansion of the ocean (a logarithmic function) of heat at the surface, hydrogen produced by conventional electrolysis in deep water which overcomes 70 percent (again logarithmic) of the storage problem associated with transportation applications, oxygen for the ocean’s increasingly deoxygenated zones and the avoidance of the use of land.

Twice the energy, plus energy security for 3,000 years, at a quarter of the cost of fossil fuels, while eliminating environmental damage is what everyone except the establishment should be crying out for.