This item is part of the Distributed Energy Resources - Fall 2019 SPECIAL ISSUE, click here for more

In a time of increasing natural disasters and power outages, “resilience” has become the word of the day. Those disasters have also highlighted the effects of climate change, increasing the urgency for setting 100% renewable energy goals. It’s clear that the time has come to move from our centralized, vulnerable energy system to one that is more resilient — and powered by local renewable energy.

How do we make that transition? And what role can be played by distributed energy resources (DER)?

The role of DER in achieving 100% renewable energy

Even when we get to 100% renewables — which becomes more possible every day — there will always be a place for centralized generation. Local renewables, however, can and must make up a sizeable percentage of our energy mix in order to achieve resilient communities.

At the Clean Coalition, a nonprofit, our vision is to achieve at least 25% of all electricity generation in the United States from local renewables. This is not theoretical. Our Solar Siting Surveys show significant solar siting potential in cities on built environments such as rooftops, parking lots, and parking structures — even in densely populated areas. And a number of communities around the world have already demonstrated the feasibility of 25% local renewables — or even higher percentages.

A major benefit of DER is enhanced resilience and energy security. Our current system of large, centralized power plants is vulnerable to massive outages from natural disasters and acts of terrorism. Incorporating smaller, decentralized local renewables and other DER diversifies our energy supply and reduces the risk of widespread power outages. 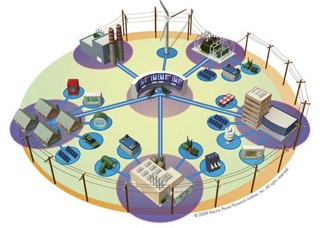 As more communities seek resilience in the face of disaster risks and planned power outages, many of them are turning to a modern, effective resilience solution: Community Microgrids powered by local renewables and supported by other DER like energy storage.

Community Microgrids represent a new approach for designing and operating the electric grid, stacked with local renewables and staged for resilience. They provide communities an unparalleled trifecta of economic, environmental, and resilience benefits. 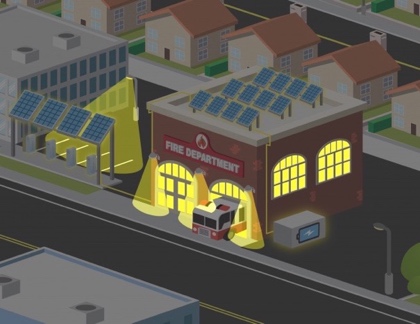 Like traditional microgrids, Community Microgrids can “island” from the larger grid and operate independently. Unlike traditional microgrids, which serve a single customer, Community Microgrids serve an entire community by ensuring indefinite renewables-driven backup power for critical community facilities such as fire stations, water and communications infrastructure, hospitals, and emergency shelters. In a comprehensive Community Microgrid, far more loads can be served for the majority of time and all loads can be served for some of the time.

Key features of a Community Microgrid:

Community Microgrids can keep critical loads online indefinitely during power outages of any length. Depending on the sizing of the battery storage and the amount of sunshine, they can keep even more of the electric load online for certain periods. The levels of Community Microgrid resilience in this chart are achieved via a net zero level of solar to a community in California with energy storage capacity equating to two hours of the nameplate solar capacity (i.e., 2 kWh of energy storage for every 1 kW of solar): 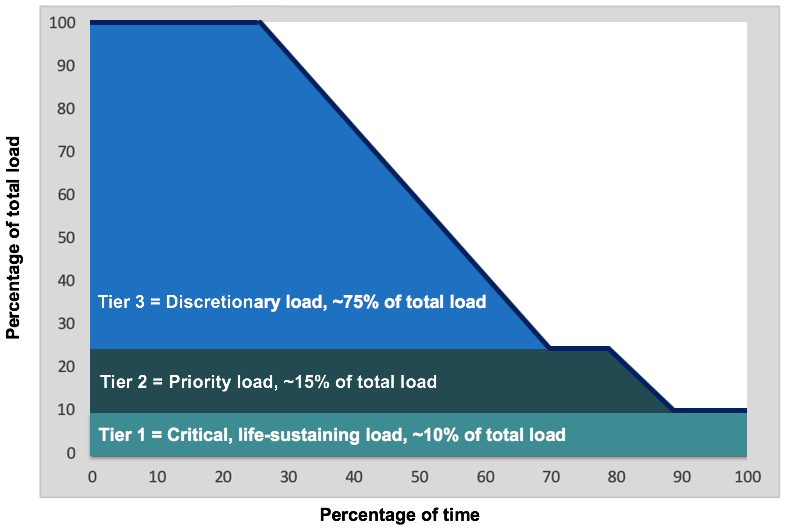 The load tiers in the chart are defined as follows:

Local renewables and enabling DER, on the other hand, are distributed and can be designed for multiple layers of cost-effective resilience.

The emergence of Community Microgrids

Beyond keeping just critical community facilities online during grid outages, Community Microgrids can leverage the distribution grid to connect front-of-meter (FOM) local renewables and other DER to serve all loads within the Community Microgrid footprint (based on the tiering scheme described before).

The technology exists for comprehensive Community Microgrids, but deploying them requires cooperation from utilities to allow local renewables and other DER to connect using the distribution grid during grid outages. Thus far, utilities have been uncooperative, as they are nervous about profit impacts from reduced needs for transmission investments — which have the highest profit margins for utilities — and policymakers have been slow to force the required utility participation. However, we don’t have to wait to prepare for the Community Microgrid future. We can start with the first building blocks in the form of behind-the-meter (BTM) microgrids and ensure they are designed to connect to larger Community Microgrids as available. This approach is already happening in a number of California communities.

One of the many areas seeking Community Microgrid resilience is the Goleta Load Pocket (GLP), a 70-mile span of California coastline that includes the cities of Goleta, Santa Barbara, and Carpinteria. The GLP is dependent on a highly vulnerable connection to the transmission system, via the eponymous Goleta Substation, which is served by a single set of power towers that carry two transmission lines that traverse disaster-prone terrain. Based on this extreme vulnerability to the transmission system, the GLP provides the perfect opportunity for a comprehensive Community Microgrid. The presence of a world-class research institution in the form of the University of California Santa Barbara (UCSB), right in the middle of the GLP and serving as the region’s primary emergency sheltering facility, significantly enhances the opportunity.

To achieve indefinite renewables-driven backup power that provides 100% protection to the GLP from a complete transmission outage (“N-2 event”), 200 MW of solar and 400 megawatt-hours (MWh) of energy storage need to be sited within the GLP. 200 MW of solar is about five time more solar than already exists in the GLP and only requires 7% of the region’s technical solar siting opportunity on rooftops, parking lots, and parking structures.

Highlighting the need for resilience in the GLP, in December 2017, the month-long Thomas Fire burned over 300,000 acres in the area. On January 9, 2018, in just five minutes, half an inch of rain fell over the denuded hillsides, resulting in Montecito being engulfed by a debris flow of boulders, trees, and over 15 feet of mud in some locations — and devastating the community with the loss of two dozen lives and hundreds of homes.

The Montecito Community Microgrid Initiative was launched in response to this set of disasters. Adding to the GLP’s resilience need is the Public Safety Power Shutoff (PSPS) plans being implemented by the local utility, Southern California Edison (SCE), in response to its potential wildfire liability coupled with the extreme fire threat in the area. PSPS events will de-energize the GLP’s connection to the transmission system on high-fire-risk days, which are being experienced with increasing frequency. 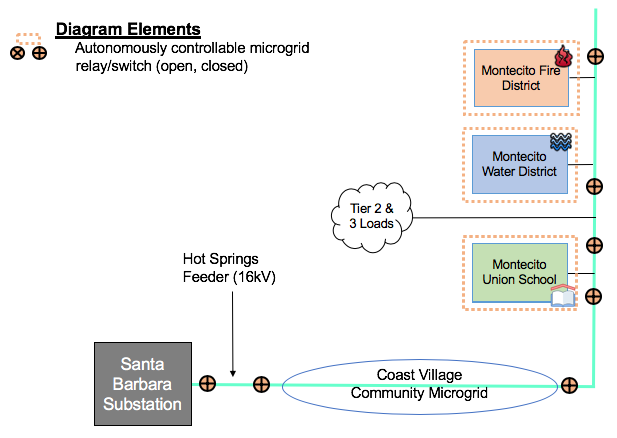 With a slightly different focus, the Calistoga Community Microgrid is part of the North Bay Community Resilience Initiative, which is helping a Northern California region build back with resilience after being devastated by wildfires in 2017.

The main motivation for the City of Calistoga is the impending PSPS events in this high-fire-threat area. Calistoga already experienced a 48-hour PSPS last year, which disrupted the City and led to substantial lost revenues for local businesses. Outages like these can be deadly for those who depend on life-supporting medical equipment. 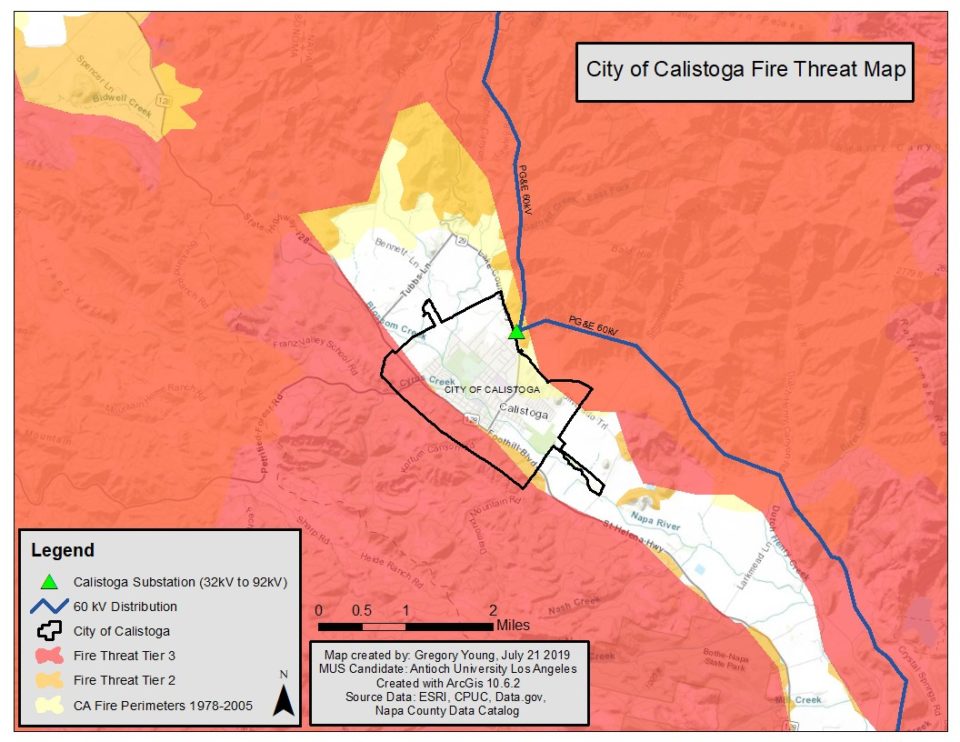 The local utility, Pacific Gas & Electric (PG&E), is currently investigating the potential for enabling temporary energy sources to protect Calistoga during a PSPS through a preinstalled interconnection hub (PIH), which is a new concept for enabling mobile energy sources to be interconnected during grid outages. While the PIH will support some of Calistoga’s businesses and residents during PSPS events, it will not power the whole city, and initially, the PIH will likely be powered by dirty diesel generators until energy storage and potentially permanent local renewables can provide sufficient energy capacity. In this way, the PIH concepts help set the stage for true and comprehensive Community Microgrids. 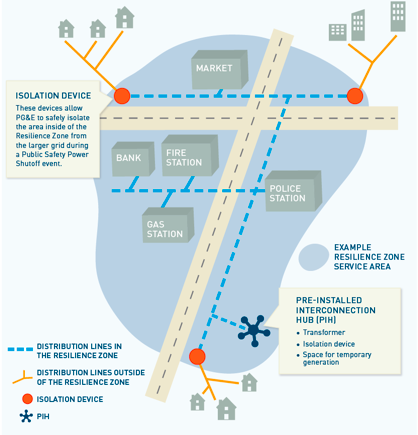 The future of renewables-driven Community Microgrids

Community Microgrids are moving rapidly from being a great idea to becoming a concrete reality. Ensuring their proliferation will require more than securing collaboration from the utilities. We must also establish favorable policies and market mechanisms that will optimize the significant economic, environmental, and resilience benefits of Community Microgrids. That includes:

While we work on the policy and market mechanism innovations that unleash true and comprehensive Community Microgrids, the building blocks are being put in place to showcase what’s possible already while providing first glimpses of the grid of the future.