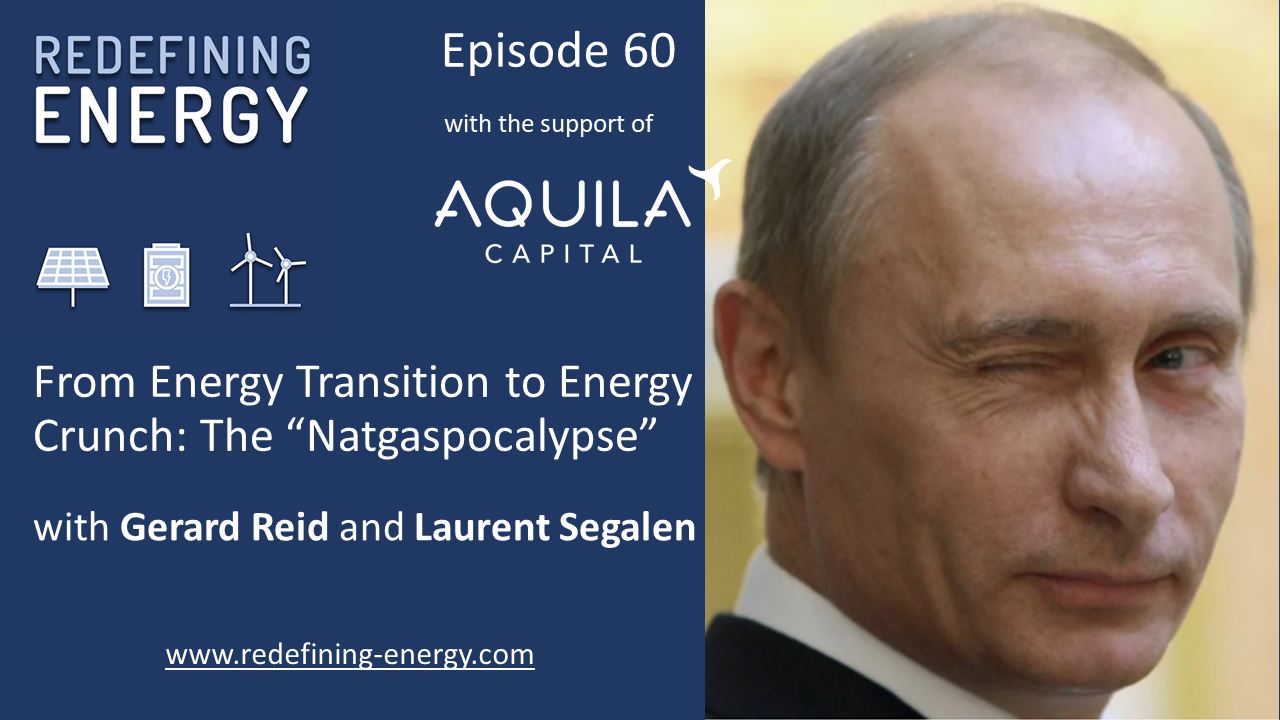 For the past decade, Natural Gas has been promoted as the “Clean, Reliable and Cheap” fuel to assist the Energy Transition. Well that cosy theory, heavily promoted by the fossil fuel companies, is collapsing in front of our eyes with the Energy Crunch affecting Europe, Asia and Latin America.

As of 6 October 2021, TTF (the Dutch gas hub) front month prices briefly touched 160EUR/MWh, 8 times higher than where they were at beginning of the year, and equivalent to a staggering 56USD/mmbtu or 350USD/bbl of Oil.

In this episode, that we record almost live, Gerard and Laurent try to analyse the causes, the impacts, and the long-term consequences of what we dub “The Natgaspocalypse”. We might as well have called the episode “From Russia with love” as we are discussing, amongst other factors, the role of Russia in the current energy crunch.

But a lot of other long-term and short-term factors have come together to create the perfect storm. So, if supply is being analysed, there is also a lot to discuss about demand.

How those crazy energy prices are fed to the final consumers is creating havoc within the Energy supply chain and triggers heavy-handed, hastily designed, government interventions. Such crises certainly distract the decision makers from their lofty “Net Zero by 2050” goals.

Even when the market ends up rebalancing, as commodities market always do, the suddenness of the shock and its magnitude will generate significant consequences that will go beyond price controls and geopolitics. Governments will need to be more hands-on, whether through a faster decarbonisation or simply doubling down on gas.

The Energy Transition will not be a smooth journey.

Thanks to Aquila Capital for supporting the show

I have tried to understand how many of the title projects are being developed over time, and probably have made some reasonable estimates of this via a database I created. The problem is, this is one strange market, with many different types of..

Affordable energy for all

In this episode, we discuss with Next Energy Consumer CEO Marine Cornelis how to put citizens and our most vulnerable consumers at the heart of the energy transition.

Carbon capture for New York high-rise apartments is a real thing now
What are the key lessons that must be learned as soon as possible from the North Carolina substation attack?
Policy promoting climate finance
Coal was the largest source of electricity generation for 15 states in 2021