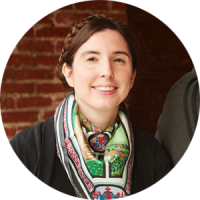 Alison Alvarez, BlastPoint CEO and Co-Founder, spent over a decade building big data tools for large companies in the media, automotive and banking spaces. She became convinced that more...

As 2020 unfolds, we hope to see more of this trend continue, so that access becomes available to more people. Following are some of the developments we will be watching for--and hoping to see more of--in the evolving, EV charging landscape.

To lower the cost of production and make EVs available to more consumers, key industry players have been talking--a lot. As we saw in 2019, Toyota partnered with Chinese battery-maker BYD to build a new EV. GM partnered with LG Chem in a joint venture to build highly efficient battery cells. In 2018, ChargePoint and UK energy provider Total Gas & Power linked up and are now creating charging corridors across the UK.

Meanwhile, utilities have been growing more cognizant of the urgency to get departments working in tandem so that they can be more nimble and able to swoop into mutually beneficial business relationships at the right time. As such, they continue working in earnest to break down silos within their own organizations.

Startup charging station manufacturers and battery producers are working out how to scale for major growth. Municipal governments are jumping at federal and state grant opportunities that give them an edge on electrifying ahead of their residents. And customer-facing retail and service-related businesses are watching the market to see when the best time to jump into the EV landscape will be.

We’re encouraged to see that all of these entities are gaining a full understanding that they won’t achieve widespread electrification without one another. As such, we are eager to see what new, intriguing partnerships will materialize in the coming year.

Smart cities, 2030 goals, and sustainable development aren’t just buzz words. They’re among a growing spectrum of programs, spearheaded by organizations like the United Nations and Architecture2030, that city, county and state governments across the U.S. and around the globe are embracing and adapting for implementation in their own locales.

City governments are uniquely poised to lead localized programs like these, which in part focus on reducing carbon emissions in advance of ten-, twenty-, and thirty-year goals. And most, like the City of Pittsburgh’s Climate Action Plan here in Pennsylvania, lay out ambitious, actionable steps for electrifying transportation infrastructure.

With access to state and federal grants, as well as taxpayer funding, city government bodies have the capacity to take these challenges on. They can more readily afford to electrify fleets, for example, and do so more easily, more quickly and more aggressively than many privately-run organizations.

Moreover, city governments that are headed by progressive leaders (i.e. mayors or city councils) are more likely to take a risk on programs like these—in many cases, in fact, their constituents expect them to. That means more battery-powered vehicles driven by local Building Inspectors and Meter Readers hitting the streets, and more EV charging at city-run garages for the public to use, whether they’re heading to the office or a night out at the opera.

Electrification of fleet vehicles and installation of charging infrastructure at public garages provide local governments advantages in at least three ways: they demonstrate the city’s green values, they save cities money over the long term on fuel consumption costs (appeasing many taxpayers), and they give administrations the ability to boast that they've made critical steps toward achieving sustainable city standards.

A side perk is simply generating more widespread adoption among casual onlookers. Given all these benefits, we are excited to see more local governments making big strides in electrification over the next year.

3. More charging stations to be powered by the sun.

People and businesses are grappling with the expense of EV charging and the amount of electricity that gets used during EV charging. Station installation often includes dredging up land in order to connect to existing power sources, and that procedure is quite costly.

Meanwhile, even though EVs cause far less air pollution than traditional cars, by virtue of being run on batteries as opposed to on petroleum, pollution from coal-burning electricity plants to power charging stations still presents a real climate concern. For some on-the-fence EV buyers and investors, this sticking point presents a major barrier.

An ideal workaround lies in solar powered charging units, like the ones being manufactured by Envision and SolarEdge, which rely solely on the sun to give EVs their juice. While still costly, they pay for themselves in eco-friendliness and better air quality. As such, we may see an uptick in these solar powered mobile charging units becoming available at both publicly and privately accessible lots. Any progress that can be made in the commercial or public sector in solar power means cleaner air, which is one trend we hope to see more of this year.

Certain convenience store and gas station-type businesses dominate the market in remote areas like highway offramps and rest stops, like Sheetz, which partners with Tesla, to install chargers at dozens of their locations.

More strikingly, the overnight accommodation and luxury getaway-focused industries are electrifying fast, and have been for some time. Signaling to high-end clientele that they need not worry about whether they can charge their EVs during an anniversary weekend or a retreat in the countryside, B&B’s, wineries, spas and hotel chains like Sheraton, which saw the future of EVs coming way back in 2010, are making major strides by offering EV charging onsite for guests.

We expect to see these kinds of businesses continue to dominate rural areas by adopting more widespread EV charging in their distinctly faraway locales. But a side benefit, which is unfortunately being somewhat overlooked right now, would be that more rural charging includes rural-state residents in the EV conversation. Our research indicates there’s more publicly available charging being installed nationwide in high-population-density areas. This trend presents an opportunity for EV charging partners to fill what could be a growing need. After all, battery-run tractors for farming really do exist.

As development in Qualified Opportunity Zones (QOZ) takes shape, we will be watching to see whether charging stations are installed in these typically low-to-moderate-income communities.

Opportunity Zones, or neighborhoods that have been long overlooked by capital investment, are now receiving a surge in new funding for the purpose of economic revitalization, thanks to the 2018 federal law. Using capital gains from the proceeds of sold investment properties, participants in the Opportunity Zone program are, as we speak, buying old or dilapidated homes and remodeling them, or investing in small businesses in designated OZs in order to revamp, restructure and restore them for a new era that, hopefully, will result in recovery and revitalization.

These districts, and the people who live there, deserve the promise that the program says it will deliver. Experts say that, over the next 10 years, if all goes well, OZ residents should see their communities getting more public attention, more jobs becoming available in their towns, more customers in local stores, higher vehicle and foot traffic, and more overall economic opportunity.

But, given a recent study published by researchers at Portland State University, the Science Museum of Virginia, and Virginia Commonwealth University, it’s more urgent now than ever for low-income communities to be invested in, as it relates to severe weather preparedness. The study explains that “redlined” districts of the early- to mid-20th Century, which are overwhelmingly minority neighborhoods that lack investment funding, good jobs, access to services, green spaces and trees, today are experiencing more life-threatening, extreme temperatures due to climate change than their better-funded, predominantly white, neighboring communities.

Many of these low-income, redlined districts are today’s Opportunity Zones, and within them, we see more heat, lower home ownership, and less economic access than they deserve. Cleaner air might scratch the surface toward alleviating this inequity. And that could come from lowering the amount of carbon emissions from vehicle engines by transitioning to electrified transportation. Will Opportunity Zones be a missed opportunity for EV investors this year? We surely hope not.