Global warming is a thermodynamics problem.   Ninety three percent of the heat of global warming is going into the oceans that are thermally stratified which inhibits the vertical exchange of heat, carbon, oxygen, and, and nutrients through the ocean.  Most of the heat goes into the top 100 meters of the tropics (the brown areas in the following graphic). 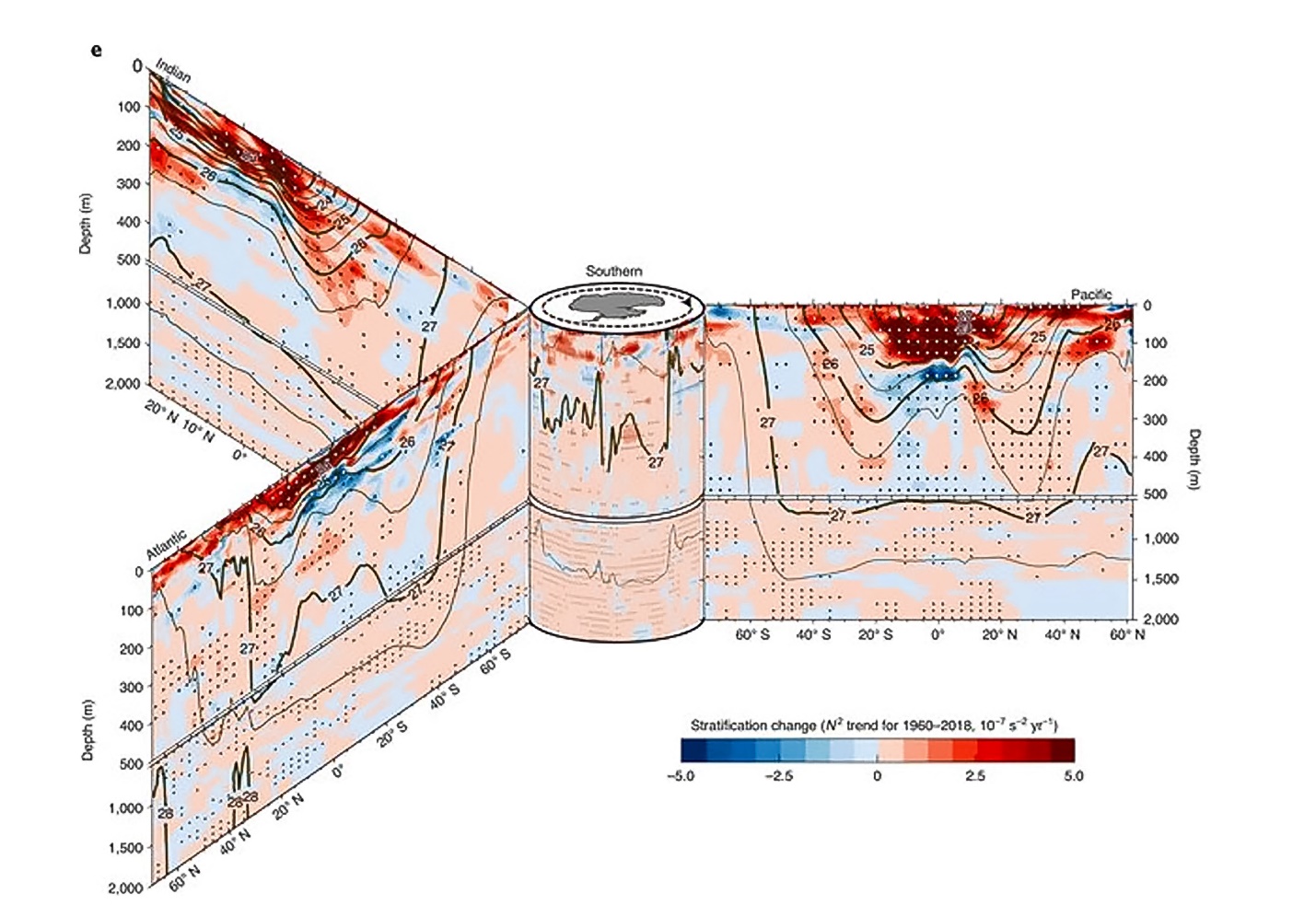 Increasing ocean stratification over the past half-century

Ocean stratification however lends itself to the conversion of a portion of the heat to work that will be undertaken on the land, which is an extraction of heat from the ocean, and the balance of the heat can be moved with heat pipes into the abyss from where it returns in about 226 years and can be recycled.

Resplandy et al.  in their paper Quantification of ocean heat uptake from changes in atmospheric oxygen and carbon dioxide composition estimated the amount of heat gain in the ocean,  estimated at 93% of the  total gain between 1955 and 2010, on  the  basis of the amount of atmospheric oxygen and carbon dioxide released from the ocean as it warms. 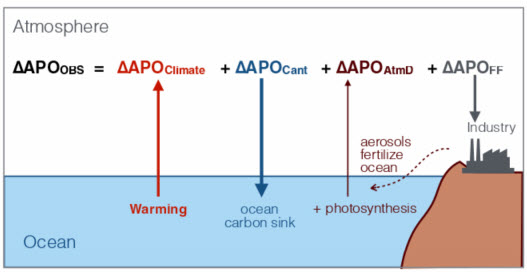 They were able to isolate the carbon dioxide off gassing,  about half the total,  from the direct effects of anthropogenic emissions and other carbon dioxide sinks.

At a 7.6% efficiency as determined by the experimental physicist Melvin Prueitt in a 2007 patent filing,  this equates to 31  terawatts - 2.1 times the current output of fossil fuels.

The conversion of heat to work and removal into deep water reverses the current off gassing of CO2 and O2 from the ocean to the ocean. And in the latter case, Canada’s iconic salmon catch has decreased by 26% due to the increase in ocean heat that removes oxygen from the ocean.

The average price paid by Stripe in 2020 for a ton of CO2 removal was $257.50, whereas the sealed,  lab scale model depicted here would produce $300 worth of power a year and transfer 3 grams of the 10.6 grams of CO2 contained in the atmospheric section of the model into the deep water. 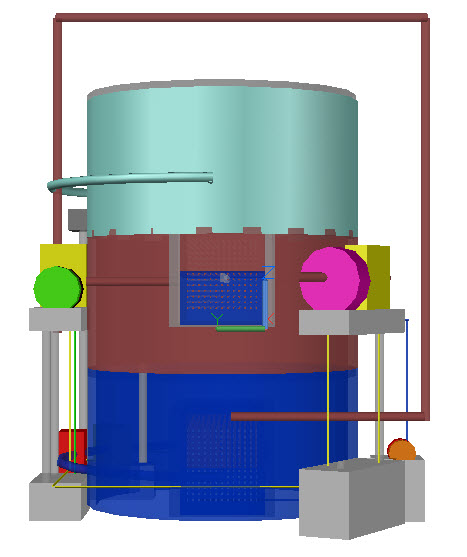 The transfer would be accomplished by cooling the atmosphere and the ocean surface (the light blue and red layers of the tank)  by 1.8oC at the expense of a .007oC warming of the deep water, considering the ocean has a three orders greater heat capacity than the atmosphere and 1000 meters, where the heat would be shifted, is about a quarter the total ocean depth.

Were this system open to the ocean, rather than a sealed unit which is easily calibrated, the $300 dollars worth of energy produced would sequester about 1 kilogram of CO2 annually.

The lab scale model scales to 31,000 1 gigawatt plants that can decarbonize all sectors of the economy with platforms that provide 234,000 sq meters each of full service electricity and/or hydrogen ocean real estate that mitigates every climate risk while removing 4.4 gigatonnes of carbon dioxide from the atmosphere annually. 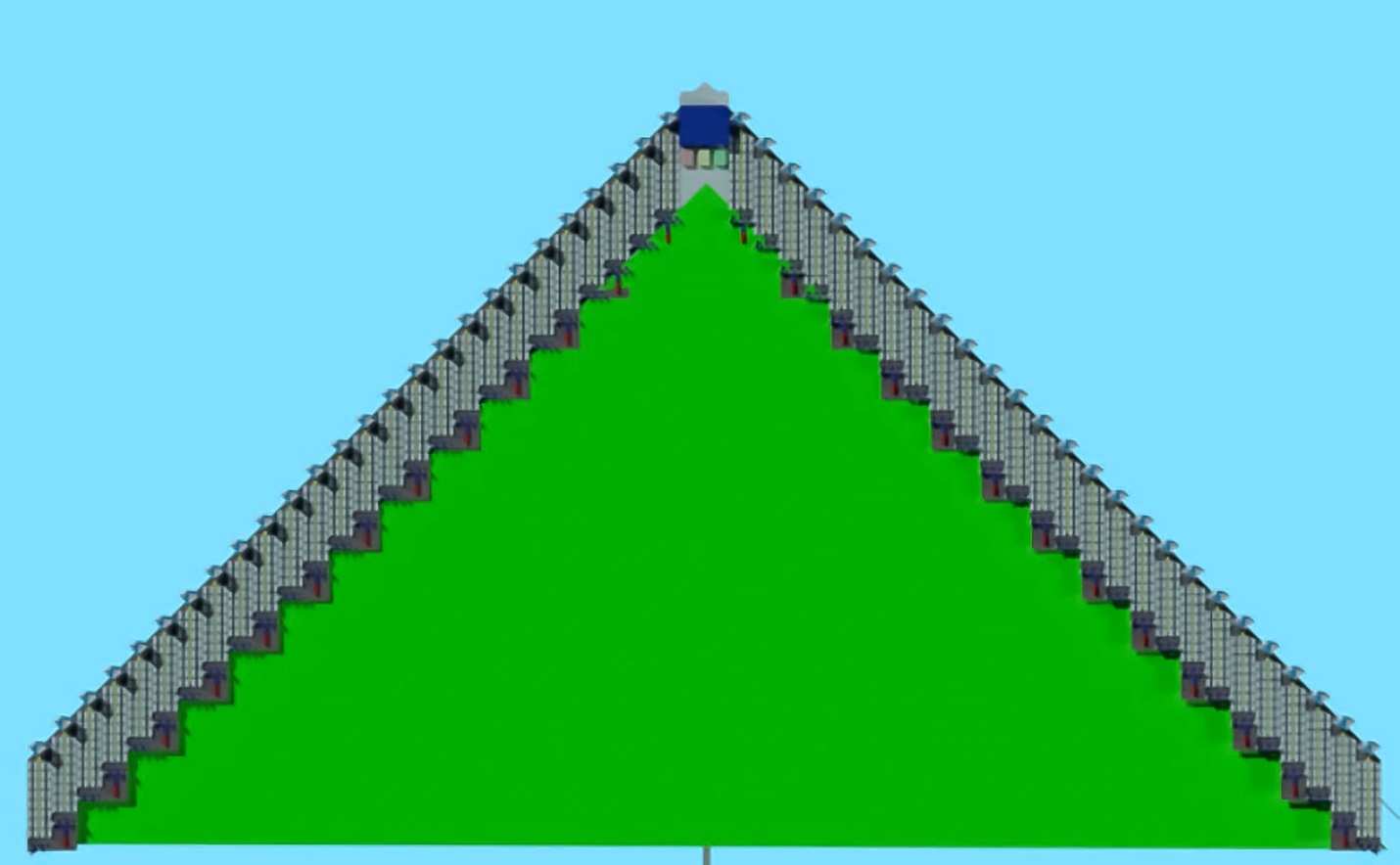 Thermodynamic Geoengineering is the revenue generating carbon dioxide removal option that produces twice the energy of hydrocarbons,  at the lowest levelized cost and highest capacity,  can do this for at least the next 3000 years,  has zero emissions,  cools the ocean surface resulting in the reversing of the off-gassing of carbon dioxide from the tropical surface and mitigates every concern of climate change.

The lab scale model that would demonstrate the capacity of Thermodynamic Geoengineering to facilitate the vertical mixing of heat,  carbon,  oxygen, and nutrients through the ocean would cost  about $1 million, yet has been shunned by the Canadian government that has subsidized fossil fuels to the tune of about $42 billion over the course of the last three years.

The 1 gigawatt plants that would sequester CO2 in the course of business, would cost about $2 billion each and produce a profit of about $6 billion/year, yet two of Canada’s biggest fossil companies say they are looking for about C$50 billion in taxpayer subsidies to bring their net greenhouse gas emissions to zero by 2050. Which is an unnecessary expenditure considering cheaper energy is available that decarbonizes every sector of the global economy at no additional cost.

Former Bank of Canada and Bank of England Director Mark Carney is the UN special envoy for COP26, responsible for getting financial institutions to join the new Glasgow Financial Alliance for Net-Zero. Since the Paris COP in 2015 however, Canada’s five largest banks have provided $700 billion in financing to fossil fuel companies and these banks and the government are chomping at the bit to pour more tax dollars into bad fossil fuel ventures to protect already sunk costs, rather than helping citizens obtain more energy, at the least cost, that mitigates every of their risks from climate change.

Bankers, petroleum executives and politicians have been high rollers too long.

It is time the public called their bluff.