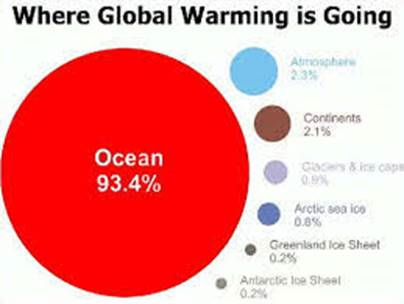 At the 2018 Stanford Energy Global Energy Forum, Bill Gates slammed solar and wind and by extension “clean energy” by channelling Vaclav Smil, Distinguished Professor Emeritus of Environment at the University of Manitoba, when he said, “Here’s Tokyo, 27 million people, you have three days of a cyclone every year. It’s 23 gigawatts of electricity for three days. Tell me what battery solution is going to sit there and provide that power.”

The battery that can produce 1260 times 23 gigawatts, 24/7/365, for the next three thousand years is the ocean. It is the repository of 93 percent of the heat of global warming. It is thermally stratified thus it can convert the heat of warming in part to productive energy, and can temporarily sequester the balance for 226 years at the end of which the heat resurfaces where it can be recycled to produce more work until the entire heat load of global warming has been converted and the waste heat of that conversion has been dissipated to space.

This battery can produce twice the energy of fossil fuels, eighteen times longer than the era of oil, at a minimum of a quarter of the cost of oil, and eliminates the environmental damage of fossil fuels.

Richard Smalley, in his Terawatt Challenge, said, “To give all 10 billion people on the planet the level of energy prosperity we in the developed world are used to, a couple of kilowatt-hours per person, we would need to generate 60 terawatts around the planet—the equivalent of 900 million barrels of oil per day,”

The paper, Quantification of ocean heat uptake based on changes in atmospheric oxygen and carbon dioxide composition, shows that the oceans are currently taking up about 384 terawatts of heat a year.

Putting this into perspective this is about 21 times the total primary energy consumed annually and 6.4 times Smalley’s 60 terawatts.

My late colleague Dominic Michaelis patented a deep-water condenser for ocean thermal energy conversion and the physicist Melvin Prueitt, in a similar invention, calculated that such a system has a thermodynamic efficiency of about 7.6 percent, therefore, the heat of warming can produce 29 terawatts annually.

The 92.4 percent of the heat of warming not converted to work is moved into the ocean depths, to 1,000 meters, at a speed approaching that of sound. The diffusion rate of heat in the mixed layer of the ocean, the top 100 metres, is one metre a day, and below that it is one centimetre a day, so the heat is available for recycling in about 226 years.

Col. Edwin Drake drilled the first successful well through rock at Titusville, Pennsylvania in 1859 so the oil era is only 162 years old.

Which compares to the Kwh cost for thermodynamic geoengineering plants of between $.01084 and $.004258 per the following.

The accumulation of heat in the ocean has been accelerating since 1990, and one recent paper says it could be heating seven times faster than today’s pace by 2050.

A net removal of this heat from the ocean is realized by the conversion of part of that heat to work that occurs on land with thermodynamic geoengineering, which may be the planet’s only salvation.

The environmental benefits provided by thermodynamic geoengineering are; surface heat relief, sea level  and storm surge reduction because heat in the deep can’t melt icecaps or produce storms, and heat at a depth of 1,000 produces half the thermal expansion of the ocean (a logarithmic function) of heat at the surface, hydrogen produced by conventional electrolysis in deep water which overcomes 70 percent (again logarithmic) of the storage problem associated with transportation applications, oxygen for the ocean’s increasingly deoxygenated zones and the avoidance of the use of land.

If twice the energy, plus energy security for 3,000 years, at a quarter of the cost of fossil fuels and the elimination of environmental damage isn’t the ultimate energy/climate solution, it doesn’t exist.

I love this thinking even though I have no idea if it is feasible. I sure hope we find out!

Twenty-nine terawatts produced by this battery each year would drawdown the current CO2 load in as little as 7 years per:

Absent this greenhouse layer, the accumulated heat in the ocean would rapidly migrate to the atmosphere, creating potentially an extinction event. Thus the need to recycle this heat as soon as it resurfaces to prolong the release of ocean heat for as long as possible.

To my mind, the current fixation on emissions is ill-founded. It is accumulating ocean heat that is our greatest problem.

We need to slowly drain the ocean battery in 13 cycles.