A Roadmap to the Ammonia Economy 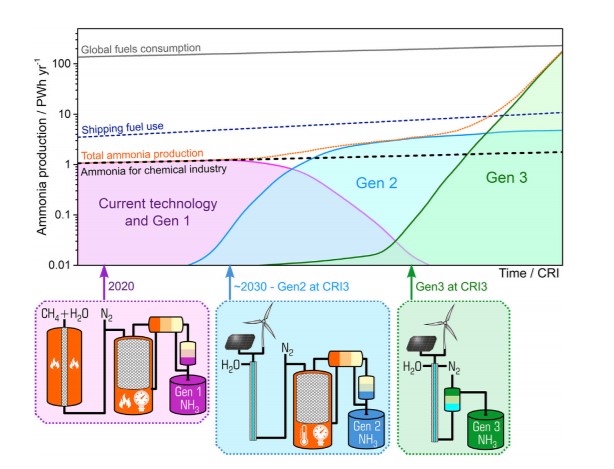 image credit: A Roadmap to the Ammonia Economy

Ammonia is increasingly recognized as an important, sustainable fuel for global use in the future. Applications of ammonia in heavy transport, power generation, and distributed energy storage are being actively developed. Produced at scale, ammonia could replace a substantial fraction of current-day liquid fuel consumption. This ammonia-based economy will emerge through multiple generations of technology development and scale-up.

This 20 page article on ammonia's feasibility as a transportation fuel is a good analysis from the Australian research team.

I had seen many reports that ammonia would be a much more convenient fuel than hydrogen, and would often be cheaper (due to lower transportation and storage costs resulting from the much better energy density).

But this article reported that in many locations globally, ammonia could actually be a cheaper fuel than gasoline and diesel, at least based on the way these items are currently priced and taxed.  [The cost they cite for ammonia (US $0.058/kWh) equates to $1.97 per gallon-of-gasoline-energy-equivalent.  So if ammonia were taxed as a fuel, rather than a fertilizer, I would expect the price advantage would likely disappear.]

Regarding the graphic posted, I found it interesting that they seemed optimistic that current fossil-fuel based ammonia production methods would soon evolve to include CC&S (which they include in their definition of Gen 1 technology).  It was unsurprising that in sparsely-populated Australia, they have no environmental concerns about scaling up solar and wind to produce green ammonia (using hydrogen from electrolysis).

The technology they label Gen3 is direct ammonia production in reverse fuel cells from water and nitrogen.  They praise this technology because it would improve compatible with solar and windpower, by helping to mitigate the intermittency problem they impose on electrical grids.  This intermittency is problematic with Gen2 (in which hydrogen from electrolysis is used in the normal hydrogen+nitrogen chemical reactors, called Haber-Bosch systems) because the chemical reactors like to run at constant flow rates; adding storage for the H2 and N2 is obviously possible, but adds cost to the system.

The authors are bullish on ammonia fuel, and provide data to back it up.

I see the rise in excitement about both ammonia and hydrogen to be gaining steam, but what'll be worth watching: are they going to cannibalize each other? Do they need all possible end uses to get that scale needed to be economic, or will it work if they each carve out their niche?

Anhydrous ammonia is a lethal gas if it gets into the atmosphere in even small quantities. The stuff requires engineered safety systems to prevent such a catastrophes.

Why would any company assume the likely immense financial risk from providing equipment/vehicles that are inherently much riskier than alternatives?

I am guessing that many ammonia advocates have never actually used anhydrous ammonia in quantity. I have and you need to be very, very careful and use properly designed precautions and equipment. Hard to imagine widespread use of the stuff by the general public. The risk would be unacceptably high.

Aqueous ammonia is relatively safe, although airborne gas will pretty much clean out your sinuses. However, unsure how useful such ammonia would be as an energy source because of being mixed with water.

Actually, a few credible studies have been done on ammonia safety during accident scenario (e.g. for transport via truck), and the assessments are typically that overall ammonia safety is basically the same as that of gasoline or hydrogen (these are much less toxic, but much more flammable and explosive).  That is talked about in the Roadmap article. I don't know the relative safety for marine shipping, but I do know that the experts consider it viable.

I think you're probably right that it is not the best choice for personal vehicles, but the challenges are doable for vehicles with professional drivers/operators; farmers use the stuff for fertilizer all the time.  I don't think ammonia's safety or smell will keep it from serving commercial trucks or trains or buses or ships.

Regarding personal vehicles: I think BEVs will dominate the zero-emission market.  But hydrogen vehicles might gain some market too.  And one solution to the hydrogen chicken-and-egg refueling challenge is to deliver the hydrogen to refueling stations in the form of ammonia, and convert to gaseous hydrogen at the point of sale.  Pipelines are by far the cheapest way to deliver hydrogen in areas with high demand.  But when city-wide demand is low, trucking becomes the only solution. And ammonia is much cheaper to deliver by truck than hydrogen.

This is a really complex issue, but an October 28 Issue of Science had an article that I found clearly explained these risks as they apply to large corporation, especially in energy industries.

Offshore Wind potential | Caribbean Islands
Are Employees Leaving the Lights On?
FERC approves PJM’s ‘first-ready, first-served’ interconnection reform plan, steps to clear backlog
QUIZ: How many wind turbines would we need to get rid of the whole thermal power?

Tim commented on ...
Biden administration gives PG&E $1.1 billion to keep Diablo Canyon nuclear plant running
As a beginning student at Oregon State University in '73 studying nuclear energy I now have to ask the question "What happened to all the great...

Mark commented on ...
Tomlinson: Plan to fix Texas' power grid benefits fossil fuels - the industry that caused the freeze
Texas has so many innovative, brilliant and well meaning companies and organizations and, most of all, individual people.