Recent announcements around green hydrogen ambitions for Heligoland prompted me to reflect on my years in the hotseat leading a major island offshore project and consider the pros and cons of such developments.

Is there anything which makes islands particularly suitable; especially for the new combination of offshore wind and hydrogen - or are there hurdles which add to the complexity?

I was project manager for the Islay offshore wind farm. Islay actually means ‘island ‘in Gaelic and I was often in the charming capital of Bowmore for regular updates to the island council; positive engagements like this help shape such major developments.

We couldn't quite get that project over the line before the support mechanism changed, but it's back and in a much bigger form in the scotwind leasing round.

I track the detail of these projects with interest and am curious as to how the issues we faced around hard, crystalline seabed conditions and the bathymetry offshore will be addressed. It was hard to get the cables ashore to the mainland - but new technologies based around dynamic floating cables and especially around green hydrogen production, may help alleviate some of the issues.

Islands present a peculiar set of challenges but also opportunities for energy developers and they are strongly represented in the current scotwind leasing round. Islanders, used to harsh conditions and being a long way from support, prove resilient, adaptable and forward-looking and may welcome new opportunities, especially if it involves something with which they are familiar.

The Shetland Islands already have a long-standing relationship with the oil-gas-industry, as it looks to de-carbonise and the associated large scale vessel, storage, logistical and infrastructure requirements for this transitioning sector are already in place.

Oil and gas interests are entering the field of offshore wind; I met with them at the Round-four-bidders-day in London and I expect them to feature prominently when leases are granted throughout UK territorial waters later this year. It will be interesting to see the synergies between the existing asset base, oil and gas aspirations and the leasing award winners.

Of the Scottish islands, one - Orkney, is already proving a world leader on hydrogen and is combining technologies including wind energy, heating and a social dimension, into perhaps the world leading scenario for wind and hydrogen. This will only gain further traction as the Orkney region has been allocated a number of offshore wind zones evidenced in the map below. With an excellent wind resource Orkney can build on its reputation for sector coupling and act as a hub between onshore wind, the new offshore wind development and green hydrogen production. Hydrogen can be stored as a liquid or a gas and should production exceed the local demand, exported in both forms. 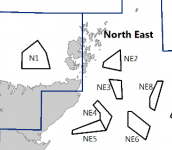 The Orkneys and accompanying wind zones

I'm tracking developments on Orkney and readers may care to listen to the recent chinwag podcast with Jon Clipsham who was instrumental in the promotion of the hydrogen economy delivering-hydrogen-economy.

On the West Coast, Islay, with a local economy based around whisky distillation, also hosts a forward- looking population that already clubbed together for a community onshore wind farm. There was talk of looking at supply chain elements such as using the draff for heat and fuelling the distilleries themselves through renewable sources. 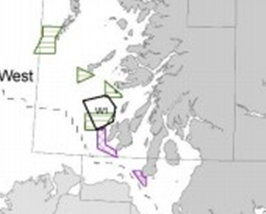 Islands can be expensive places in which to live and work; virtually everything needs to be imported. This is particularly the case for diesel as prices reflect the challenges in its delivery, storage and distribution. It is interesting that ferry companies are themselves exploring hydrogen fuel cell propulsion as a future option.

For islands, especially remote ones, problems around gaining electrical grid access connections can be very real. The long-standing Viking project on Shetland was largely planned around SSE’s provision of grid. Whilst grid comes in a variety of forms, it is not particularly flexible, and its provision is controlled through a sometimes-tortuous process with the regulator. The grid may be offered in a variety of sometimes inflexible 500-megawatt blocks which can make planning and long-term project delivery difficult.  One solution to this however may lie in the form of electrolysis with any overspill used to generate the versatile storage medium of hydrogen. I'm watching with interest to see whether electrolysis features in the Scotwind awards, it was after all, planned in from the outset but, after a two-year delay, others are blazing the trail.

Global offshore wind and hydrogen leadership could revert to Scotland with opportunities in Shetland and Orkney where the hydrogen economy already exists and where a series of zones may combine fixed foundation and floating offshore wind turbines. It will be interesting to see whether the consented onshore windfarms with an electrolysis element can lead the way.

The Shell-led, crosswind and blauwwind proposals off the coast of Holland involve myriad stakeholders and include an electrolyser element and have major players in the background such as Eneco, Gasunie and Orsted. Some countries such as Denmark and Holland are looking at building artificial islands out at sea to act as energy hubs. Scotland, with its highly suitable island chains is in an excellent position to regain global leadership ambition, drive decarbonisation and to feed into a proposed Europe wide hydrogen grid (below)

Proposals for hydrogen pipelines from Scotland to Europe

Should these phased mega-projects prove successful they may serve as templates for a global rollout of combined hydrogen and wind schemes, of up to 10GW, involving offshore, hydrogen, battery and perhaps a floating array of solar for when the wind isn't blowing. It is an exciting time to be involved in offshore wind; islands are clearly extremely well placed to lead the future offshore wind and hydrogen economy.

If you are interested why not join a community of like-minded individuals at the offshore wind and hydrogen group https://bit.ly/3a9PDTT where I look forward to keeping you informed.

Thanks Charley. I was just about to post this link:

As you point out:

Orkney, is already proving a world leader on hydrogen and is combining technologies including wind energy, heating and a social dimension, into perhaps the world leading scenario for wind and hydrogen.

Love that you brought your experience into play for this, thanks for sharing, Charley!

When it comes to island economies and hydrogen development specifically, is there an inherent problem in that the hydrogen produced (unless used entirely on the island) would end up needing large-scale ships to carry it to the other end destinations, and those ships being pretty carbon intensive for the time being? Or do you think the goal is moreso to use as much as possible domestically anyway?

Hi Matt yes, depends how you look at it. Ports may welcome the vessels, especially if oil and gas is on the wane.

The sector is also looking to repurpose oil and gas pipelines where possible.