Extreme weather events like the one leading to the Texas blackouts this winter have refocused attention on our electricity transmission system. That’s only accentuated an already ongoing focus on transmission, which some are touting as a silver bullet that will speed the transition to clean energy. At the same time, awareness is increasing about the exorbitant costs associated with transmission, which are out of control throughout the US. 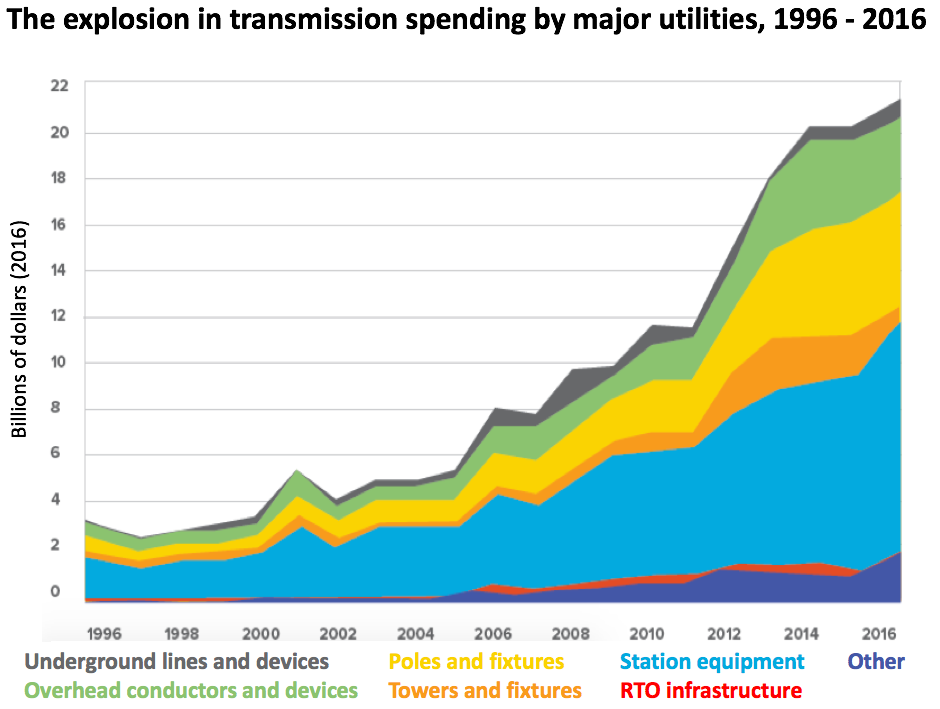 In California, where transmission already costs about the same as energy itself, transmission costs are the fastest-growing component of electricity bills. Increasingly, it will cost more to move energy around than generate it.

With these high costs — as well as the inefficiency of transmission, its associated carbon emissions, and transmission’s inherent lack of resilience — energy solutions should be focused on distributed energy resources (DER). Community Microgrids and other DER-driven solutions bring our communities an unparalleled trifecta of economic, environmental, and resilience benefits. Instead of expanding an outdated, centralized energy system that transports our energy from remote sources at great cost, we should be expanding clean local energy that is generated where people need it, where they live and work.

But significant barriers exist to proliferating clean local energy, such as the lack of policies and market mechanisms that support DER. We need policy innovations that will help shift our focus from transporting remotely generated energy over great distances to generating more energy locally.

One of the most important of these policy innovations is fixing the Transmission Access Charges (TAC) market distortion in California.

This massive market distortion creates an unfair disadvantage against clean local energy. The result is that Californians could lose upwards of $60 billion over 20 years — and the state is being needlessly impeded in its objectives to develop more clean local energy and to enhance resilience.

As is shown in the figure below, the way TAC are metered in IOU service territories, at the customer meter, does not distinguish between energy generated nextdoor and energy generated 1,000 miles away. 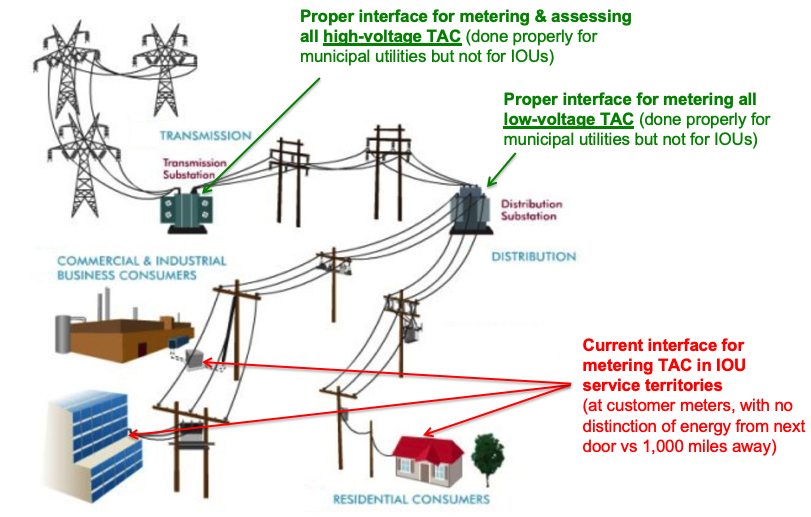 The result is an insidious cost-shift in the way that California ratepayers in IOU service territories are subsidizing transmission infrastructure — at the expense of market opportunities for DER and the resilience that only DER can deliver.

Because TAC are obfuscated as T&D “delivery” charges on ratepayer bill, almost nobody is aware of the gross injustice that is happening to them. The TAC, which are charged to load-serving entities (LSEs) like IOUs, municipal utilities, and community choice aggregators (CCAs), are essentially invisible to everyone else. Hence, this obfuscation has allowed the entrenched transmission owners, which are primarily the IOUs, to get way with ignoring transmission costs in their energy procurement decisions. When transmission costs are properly accounted for, however, local renewables are often cheaper for ratepayers while delivering immense additional benefits, like staging communities for resilience. The end result of the current system, though, is a cost-shift in IOU service territories that effectively charges extra “shipping and handling” costs on local energy that should not be subjected to such costs.

The following charts illustrate the effects of this market distortion. The chart on the left shows how ignored transmission costs make remote generation look cheaper. But when the TAC market distortion is eliminated and transmission costs are properly accounted, local renewables are substantially more cost-effective, and often cheaper, as is shown in the chart on the right — and we get resilience value and the many other benefits of local renewables at no extra cost.

Under the current TAC market distortion, CCAs and IOUs often end up buying energy from distant sources, because it looks cheaper. But that energy requires billions of dollars of inefficient transmission lines to reach customers — and those costs are socialized among all California ratepayers in IOU service territories. The remotely generated energy is significantly over-procured to create a vicious cycle that causes more transmission infrastructure to be built in order to deliver the new remote generation, needlessly driving up California’s energy bills and resulting in fewer clean local energy projects. This situation is stealing market opportunity from local renewables, and this insanity must be stopped.

The Clean Coalition, a California nonprofit, did a deep analysis on how the TAC fix will expand local renewables and reduce TAC costs that ultimately burden ratepayers, as shown in the below chart. Under the business-as-usual case, California will likely meet 12.4% of its electricity needs with local renewables 20 years from now. But the TAC fix could lead to over 30% of the state’s electricity coming from local renewables in that same timeframe — with savings to Californians of over $60 billion. And Californians will enjoy the many other benefits of clean local energy, such as nearby jobs and community resilience. 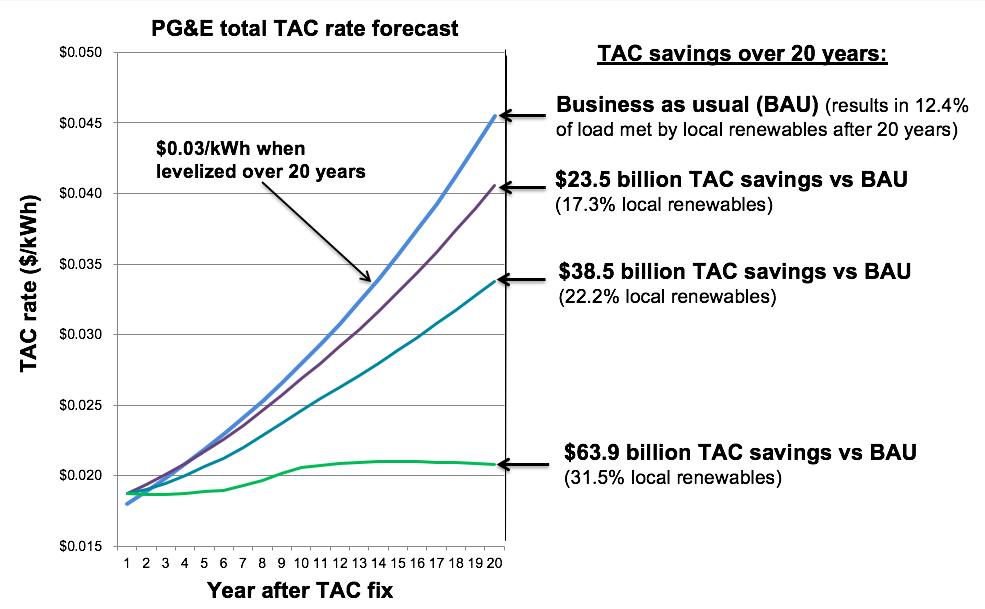 This is not just theoretical. Already, in the 2017 – 2018 planning process, the California Independent System Operator (CAISO) canceled $2.6 billion worth of approved transmission projects because increased energy efficiency and DER deployments eliminated the need for this expensive transmission. That $2.6 billion is even more significant than it sounds, because transmission costs are much higher than the initial utility investments we’re all paying for. With the added cost of operations and maintenance (O&M), plus the guaranteed return-on-equity (ROE) on transmission investments of 12%, transmission costs go up 10 times beyond their initial capital costs. These costs are passed on to ratepayers.

A recent study by Vibrant Clean Energy, which used highly sophisticated modeling, showed that DER can save all Americans hundreds of billions of dollars. While this study focused on more than just transmission, it provides further evidence of the cost savings realized by deploying more clean local energy. The study found that if we deploy enough large solar and wind farms to decrease CO2 emissions by 95% by 2050, Americans will pay $385 billion more for power over the next 30 years. However, if we scale up local solar+storage in addition to and in coordination with utility-scale renewables, we can achieve the same clean-energy goals while saving $473 billion. This favorable $858 billion dollar swing also stages for renewables-driven community resilience for free. 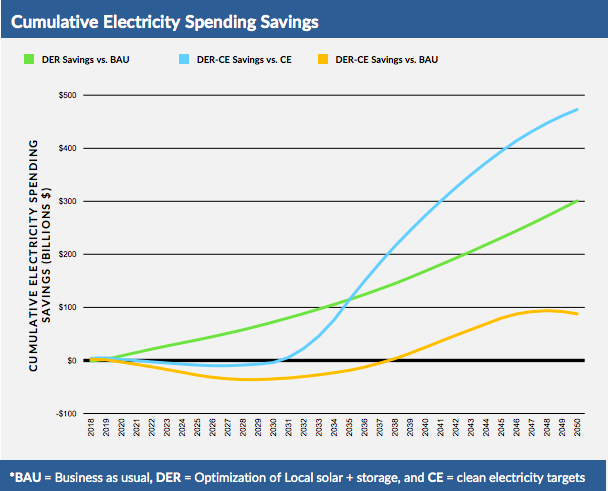 Why our energy market is distorted

If clean local energy can save us so much money, why is there so much focus on remote energy generation and its attendant transmission infrastructure?

The answer lies in entrenched conflicts of interest that are based on an outdated, centralized energy system. When our energy system was built, all energy was generated remotely, so it made sense to incentivize utilities to build out the necessary transmission system. In fact, the IOUs are highly incentivized to overbuild, because of their guaranteed return-on-equity (ROE) on transmission investments of 12% — a guaranteed ROE that would be unheard of for any other investment. And as noted above, with the added cost of O&M, plus the 12% ROE, transmission costs go up 10 times beyond their initial capital costs. These costs are passed on to ratepayers.

Today, local energy generation should be maximized for economic, environmental, and resilience benefits, so focusing on remote generation no longer makes sense. But the IOU business model thrives on a centralized system, and the TAC market distortion arose because of that outdated model. When all energy generation was centralized, there was no negative impact to assessing TAC on all energy, because all energy used the transmission grid. Now that some of our energy is generated locally — and a lot more should be — assessing TAC on all energy results in insidious market distortion.

The TAC fix is relatively straightforward:

We don’t need to reinvent the wheel to make this fix. As noted above, TAC are already being metered and assessed correctly in municipal utility service territories.

The Clean Coalition has been leading a campaign to fix TAC for years. After a lengthy CAISO stakeholder process, CAISO agreed that TAC reform is needed but noted that making the fix would require interagency coordination with the California Public Utilities Commission (CPUC). With a growing group of allies and supporters, the Clean Coalition is working to get legislation introduced in California to compel CAISO and the CPUC to take action on this important fix. Please join us!

The TAC issue may seem obscure, but fixing TAC is key to deploying more DER and DER-driven Community Microgrids in California. Fortunately, more organizations, legislators, and regulators are recognizing the importance of this fix. TAC reform is a necessary piece of the puzzle to accelerate and facilitate local renewables — which will provide resilience, boost local economies, and create jobs.

Craig, Appreciate the work that Clean Coalition is doing on this issue. Two technical questions about your analysis:

1) For existing (sunk) transmission costs, if your TAC reform is adopted, then high voltage transmission rates will go up immediately since the kWh over which they are spread will go down. For the portion of customer demand served by distant generation, costs will go up. Does your PG&E analysis take that into consideration when determining net savings?

Thanks for your questions, John! I'm the Clean Coalition's Communications Director, stepping in for Craig here.

The transmission revenue requirement (TRR) is how the TAC charges are assessed. This does not change; it's the same the day before the TAC reform is implemented as the day after. The TAC rate goes up, but it gets applied to fewer kWh, so overall it will remain basically the same for everyone. The key is that once we eliminate this massive market distortion, there will be far more local renewables built for everyone in all service territories, and all ratepayers will benefit from that significantly over time.

Yes, we are accounting for the fact that existing transmission lines will remain in service, but we want to avoid building more — which come with huge O&M costs. We're assuming that the existing transmission grid will be mostly maintained at its current capacity and load growth will be satisfied by deployment of local renewables. Our end-game vision is that we will get to 100% renewable energy, with 25% of that being from local renewables.