The quote made famous in the great 1989 film, Field of Dreams, “If you build it, they will come” is often cited by proponents of wind and transmission development.  With a life of 40 to 50 years, transmission structures will almost certainly return significant economic benefits for many years once constructed.

The unprecedented recent push for offshore wind power along the Atlantic coast highlights a large opportunity for transmission developers.  Along with this planned development, it has become clear that a tremendous amount of new high-voltage transmission and grid infrastructure upgrades are needed.

Earlier this week, New Jersey Governor Phil Murphy issued an executive order raising the state’s goal for offshore wind energy from 3.5 gigawatts (GW) by 2030, to an astounding 7.5 GW by 2035, this coming on the heels of several recent eastern state-level announcements to expand offshore wind development along the Atlantic Seaboard.

From data compiled by ABB’s Velocity Suite research team, there are now roughly 27.5 GW of offshore wind projects planned for development along the Atlantic coast by 2035.  That’s roughly the same amount of capacity from all sources currently operating in Texas, which is by far the largest home to onshore wind capacity in the country.

For the northeast to realize the full value of the rapid development of offshore wind resources, developers and regulators will need to support a Texas-sized high-voltage transmission development effort.

Visualizing an economic opportunity back in 2005, the Texas state legislature passed Texas Senate Bill 20, instructing the Public Utility Commission of Texas (PUCT) to designate Competitive Renewable Energy Zones (CREZ) and to develop plans to build-out a new transmission super-grid connecting wind-rich West Texas with East Texas load centers.  The development of CREZ was a crucial step that enabled the unprecedented growth of wind power in Texas.

Construction started slowly in early 2009 and grew from a few projects to about 25 by July 2011.  Over the next 2.5-years, construction quickly ramped up, peaking at more than 80 projects in full build-out throughout most of 2012 and 2013.

At one point, one observer described the construction as though it were a giant Erector set being constructed across the Texas landscape with towers and wires in all stages of buildout.

The project was mostly completed by the end of 2013, with roughly 3,600 miles of 345-kV conduit including new and upgraded substations.  Most of the transmission right-of-way involved double–circuit construction.  The total investment when the project was completed was $6.9 billion.

Today there are 27.7 GW of operating wind capacity in Texas – more than 3 times that of the next closest state, Iowa, which has about 8.9 GW operating today.

A similar story has been written in the northcentral states as two major transmission development programs were approved and developed over the past fifteen years.

The first was CapX2020, a joint initiative of 11 transmission‐owning utilities in Minnesota, North Dakota, South Dakota, and Wisconsin.  The original plan was to upgrade and expand the electric transmission grid, with a secondary goal of driving new wind development.  The final segment was placed into operation last September.  The combined build-out involved 800 miles of 345-kV and 230-kV conduit at a cost of roughly $2 billion.  Today there are 8.8 GW of operating windfarms across the four-state area, with an additional 8.7 GW in various stages of development.

Since the MISO MVP program’s inception eight years ago, there have been 14 projects completed at an estimated cost of $5.55 billion dollars.  Today there are 2 projects underway valued at $0.58 billion with the remaining pending projects valued at $0.47 billion expected online between now and 2023.

The MVP program was projected to enable 25 GW of wind capacity.  Today, there are 28.0 GW of operating wind farms located within the 9 state MVP footprint.  Almost as quickly as the lines have been energized, the capacity has been absorbed.  To that point, unless there’s more development soon, there will be several projects held up indefinitely.

The bottom line is that high voltage long-haul transmission is needed to move wind power to distant urban demand centers.  Like the “forward-thinking” ambitious Texas CREZ, CapX2020 and MISO-MVP projects, support from the government, regulators, and financiers are necessary to enable 27+ GW of offshore wind capacity along the Atlantic coast.

Across the region, government officials and developers are all looking for the best way to deliver power into the renewable-starved northeastern states.  One major player has stepped up with several initiatives designed to build out open-access transmission superhighways.

Back in May, Anbaric Development Partners (ADP) and Commercial Development Company, Inc. (CDC) announced an agreement to launch the Anbaric Renewable Energy Center at the CDC’s Brayton Point Commerce Center in Somerset, Massachusetts.

The agreement supports CDC’s vision to convert the former 1,600 MW coal-fueled power plant into a logistics port, manufacturing hub and support center for the burgeoning offshore wind industry along the Atlantic coast.

The redevelopment project at Brayton Point includes over 300 acres of waterfront property and a deep-water port.  The development group cites public support for energy diversification and the proximity of Brayton Point to the offshore wind energy lease tracts as strong reasons for developing the Brayton Point project.

The key component of the Anbaric Renewable Energy Center is to construct a 1,200 MW high-voltage direct-current (HVDC) converter on-site to serve offshore wind projects.  Along with the converter project, Anbaric will develop a 400 MW battery storage on site.  The two development projects are estimated to cost roughly $650 million.

The Brayton Point project is part of a much larger vision to develop the Massachusetts OceanGrid project, an open access undersea transmission conduit to connect several offshore projects with the mainland. 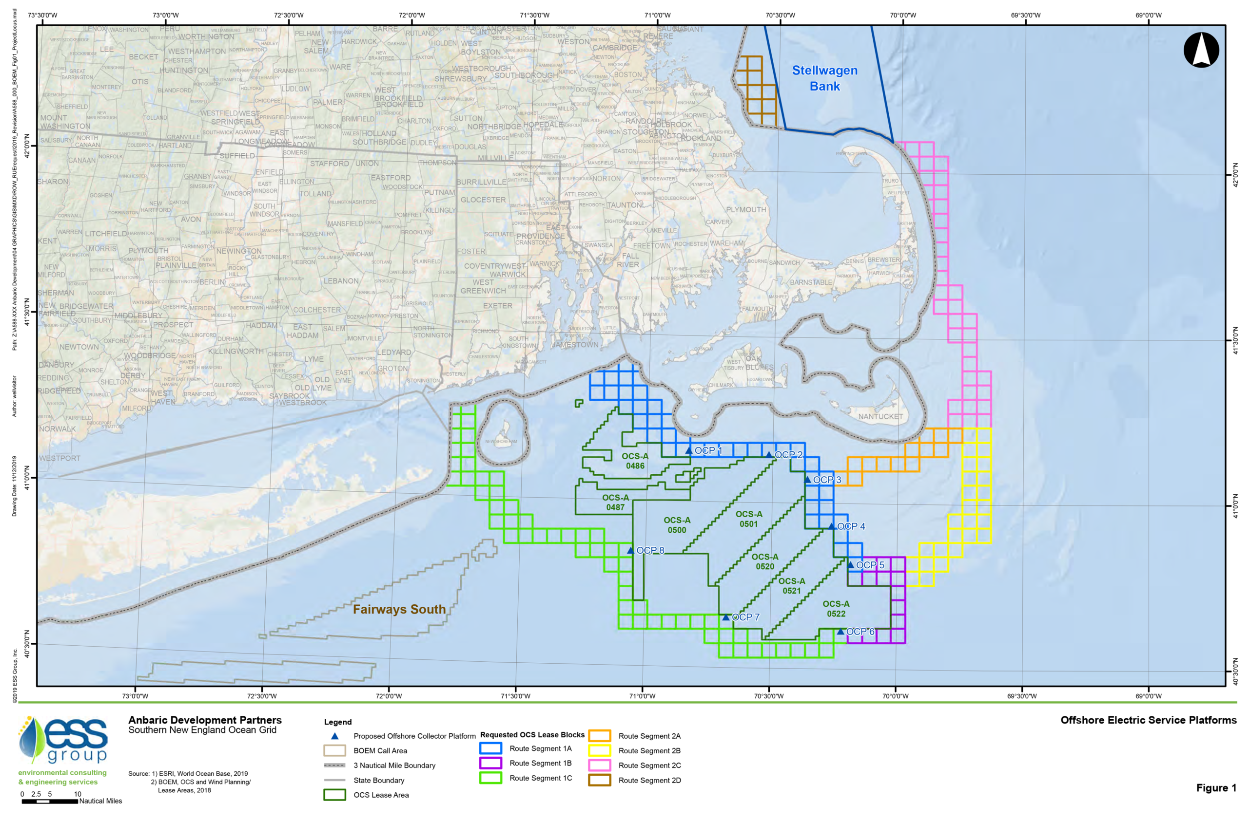 The project would be built in phases over a 20-year timeframe with a goal to connect 16 GW of offshore wind to Connecticut, Massachusetts, and Rhode Island.  Three projects have already been approved for offshore development:

Anbaric, headquartered in Wakefield, MA, has a strong track record in undersea transmission projects where they led the development of two fully operating 660 MW HVDC undersea cables: the Neptune and Hudson projects were completed on time and under budget.

Further supporting New Jersey’s ambition plan, the states Senate Energy & Environment Committee voted last week to advance S3985, commonly called “The Offshore Wind Economic Development Act”, which allows transmission only bids to be considered in the state’s offshore wind procurement process. The bill was introduced back in June and was moved to committee earlier this week.

Earlier this month, Senator Martin Heinrich (D-NM), a member of the Senate Energy and Natural Resources Committee, unveiled he was working on legislation to offer a federal Investment Tax Credit (ITC) for transmission line developers.  The proposal would work much like the current federal ITC for solar and Production Tax Credit (PTC) for wind that has supported the rapid development of renewable energy over the past decade.

The proposed legislation probably won’t make it into this year’s tax extenders package, as both House and Senate leaders work to integrate existing tax credits for renewables in the upcoming spending legislative debates.

One thing is for certain, if you build state-of-the-art high-voltage transmission and upgrade the substations to deliver it, the renewable projects will follow.  More offshore and onshore wind development is needed to meet the growing number of ambitious state-level carbon reduction goals.  To make it happen, new initiatives like those developed by Anbaric and others need financial, regulatory and public support.

When will my power be restored? Expect multi-day recovery with nearly 1.4M out, N.J. power companies say

The tri-state area was battered last night and it looks like it will take some time before we can declare a full recovery. I wonder, will events like this and the memory of Sandy push legislators in the region to invest heavily in hardening their..

When will my power be restored? Expect multi-day recovery with nearly 1.4M out, N.J. power companies say