According to the latest data from the Global Wind Energy Council (GWEC) some 93 GW of new wind capacity was installed in 2020 – another record – bringing the total to 751 GW. By comparison, the global nuclear capacity is around 390 GW, total US installed capacity – which includes all types of generation and fuel – is approximately 1,117 GW. While some technologies such as nuclear plants tend to operate 24/7 and at full blast as baseload, it is clear that at current rates of growth wind – and solar – will soon eclipse nuclear output in many parts of the world and at prices that are hard to beat. 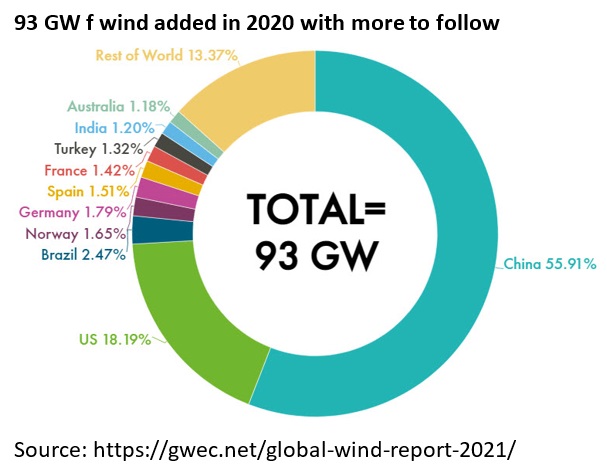 What may be less-known is the employment impact of the wind industry. According to GWEC, wind can create 3.3 million additional jobs over the next 5 years. It already employs nearly 1.2 million according to the International Renewable Energy Agency (IRENA). As of 2020, there were approximately 550,000 wind energy workers in China, 260,00 in Brazil, 115,000 in the US and 63,000 in India, according to a global survey by GWEC Market Intelligence.

A new study published by Ryan Wiser and colleagues at the Lawrence Berkeley National Laboratory (LBL) concluded that, “Wind costs have plummeted in recent years. The levelized cost of energy (LCOE) of onshore wind in the US now averages (at) $35/MWh, with power sales agreements often signed at below $20/MWh.”

Moreover, the LBL study suggests that there is still room for cost reductions in wind, both onshore and offshore (visual) 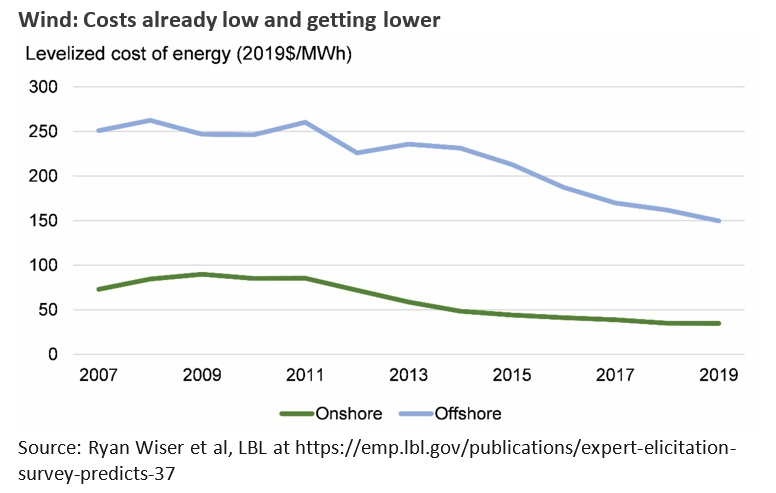 “Prices for wind energy have hit rock bottom as the market has expanded, driven by technology innovation, industry maturation, and macroeconomic factors. Initially these cost reductions materialized in onshore wind, but cost declines have accelerated for offshore wind over the last five years. Given these cost-cuts, are the opportunities for significant additional cost reductions tapped out? Recent research suggests that some energy planners, analysts, and policymakers run the risk of underestimating both the potential for and uncertainty in wind energy cost reductions.” 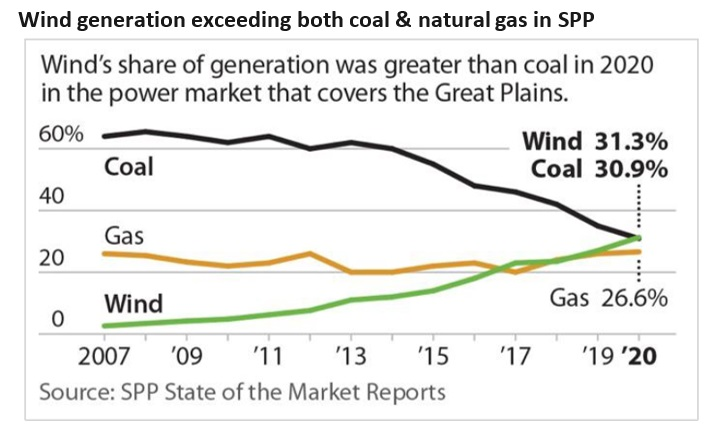 US President Joe Biden frequently refers to the job creation potential of renewables when he talks about his renewable targets and climate goals. For those who are not particularly concerned about the environment, perhaps the prospects for good paying jobs will convince them to support the transition to renewables.

Regardless of the politics, market forces tend to prevail, which means that more wind – and solar – are being added to the electricity mix nearly everywhere. As illustrated in the accompanying visual, wind is now the biggest single source of generation is the Southwest Power Pool (SPP), a windy part of the US. Starting from virtual nil in 2007, it now exceeds both natural gas and coal generation. The trends can be expected to accelerate.

Including the significant cost of carbon – and eliminating the various forms of implicit and explicit subsidy – fossil fuels will continue to lose market share to renewables. The sooner this new reality sinks in the better.