The nation’s only large-scale, advanced fast-neutron source for endurance testing of nuclear fuels, sensors and materials. The 300-megawatt (thermal) reactor will be a user facility open to researchers based on the merits of the proposed experiments.

An important perspective from Wade Marcum, Associate Dean for Undergraduate Programs at Oregon State University on the Versatile Test Reactor's role in returning the United States as a world leader in nuclear innovation and technology development. 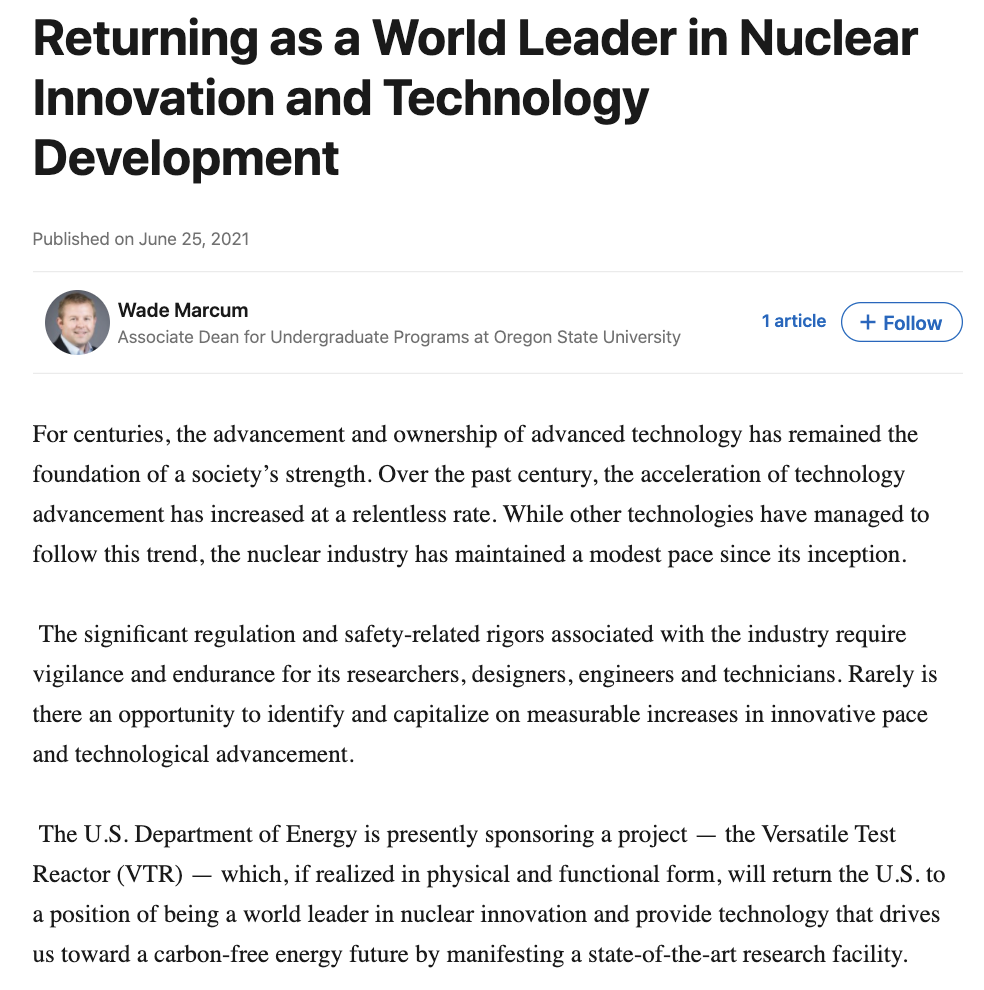 Returning as a World Leader in Nuclear Innovation and Technology Development

For centuries, the advancement and ownership of advanced technology has remained the foundation of a society’s strength. Over the past century, the acceleration of technology advancement has increased at a relentless rate. While other technologies have managed to follow this trend, the nuclear industry has maintained a modest pace since its inception. The significant regulation and safety-related rigors associated with the industry require vigilance and endurance for its researchers, designers, engineers and technicians. Rarely is there an opportunity to identify and capitalize on measurable increases in innovative pace and technological advancement.

Versatile Test Reactor
The nation’s only large-scale, advanced fast-neutron source for endurance testing of nuclear fuels, sensors and materials. The 300-megawatt (thermal) reactor will be a user facility open to researchers based on the merits of the proposed experiments.
Follow Go to Org's Profile page
RECENT POSTS FROM THIS COMPANY

Duke Energy to seek license renewals on all 11 of its U.S. nuclear plants
Problems at China nuclear power plant are serious enough to warrant shutdown, French co-owner warns
3 Ways to Make Nuclear Power Plants Faster and More Affordable to Build
ESG Reporting as a Means to Leverage Interest by Investors in Next Generation LWR and Advanced Nuclear Reactors

Matt commented on ...
How could a billing system attack shut down an OT network?
As the entire utility sector and energy systems get more and more complex, it seems that's just opening the door where there are more places to...

Richard commented on ...
Video of Josh Corman’s SBOM Proof of Concept talk
I watched Josh's talk during the Energy SBOM meeting that Tom refers to.

Jim commented on ...
Data Security for Utilities in the Age of Digital Transformation
Security has to be a near impossible issue with all the internet access and  hundreds of users.

Richard commented on ...
Emerging Threats: Small Businesses are Especially Vulnerable to Ransomware Trends « Cyber Security Summit
So true, Matt. We are all tied together in some form and that means we are all vulnerable to the same risks. COVID-19 showed how this effect can...