Laura Scheele is the Communications Director for the Versatile Test Reactor. She has worked in the nuclear community for more than twenty years.

The announcement comes after BEA, the contractor that operates Idaho National Laboratory for the U.S. Department of Energy, and members of the VTR technical team reviewed submissions by industry teams in response to a Request for Proposal issued earlier this year. After careful review of multiple high-quality proposals, BEA selected the BNI-led team to start contract negotiations. INL manages the VTR project on behalf of DOE’s Office of Nuclear Energy.

“We received excellent proposals from industry, which is indicative of the support to build a fast-spectrum neutron testing facility in the United States,” said Mark Peters, Idaho National Laboratory director. “We are excited about the potential for working with the BNI-led team. They will bring a lot of design and construction expertise to the VTR project. This is essential since it has been several years since we built a test reactor in the United States.”

DOE’s Office of Nuclear Energy established the VTR program in 2018 in response to several reports outlining the need for a fast spectrum test reactor and requests from U.S. companies developing advanced reactors. Currently, there are very few capabilities available for testing fast neutron reactor technology in the world and none in the United States. In 2018, Congress passed the Nuclear Energy Innovation Capabilities Act (NEICA), which highlighted the need for a reactor-based fast neutron source and authorized DOE to proceed.

“We are looking forward to successful negotiations with the BNI team and want to make sure the project is ready to go in Fiscal Year 2021,” said Kemal Pasamehmetoglu, executive director of the VTR project.

Dr. Rita Baranwal, assistant secretary for DOE’s Office of Nuclear Energy, said it is important for the VTR project to move forward.

“The VTR team led by INL has established a solid foundation upon which the design phase can begin,” Baranwal said. “We have repeatedly heard from industry and other stakeholders that the United States needs a fast neutron scientific user facility to maintain our global leadership in nuclear energy. The selection of the BNI team with its TerraPower and GE Hitachi partners, puts us firmly on the path toward building this important infrastructure capability.”

The INL-led team is also supporting the development of an Environmental Impact Statement that will be used to assist the Department in making the final decision on the design, technology selection and location for VTR. The final decision is expected in late 2021.

INL is a U.S. Department of Energy (DOE) national laboratory that performs work in each of DOE’s strategic goal areas: energy, national security, science and environment. INL is the nation’s center for nuclear energy research and development. Day-to-day management and operation of the laboratory is the responsibility of Battelle Energy Alliance.

Given concerns about the U.S. ceding leadership on nuclear energy tech to other nations, seeing advancement and wide collaboration on a project like this is quite encouraging. How quickly, once implemented, might this test reactor be able to start pushing technology forward for the U.S. nuclear industry?

Matt, not sure why they are labeling this program a "Virtual Test Reactor" - DOE won't be providing any reactor. VTR is a laboratory that will permit independent developers to test their designs in an environment where containment, cooling water, and a "hot room" already exist, saving hundreds of $millions in development costs. How quickly a design will emerge. ready for commercial development. depends less on technical challenges than removing regulatory roadblocks.

DOE developed early versions of the Integrated Fast Reactor (IFR) there, and the silver-domed building that will house VTR is a local landmark. 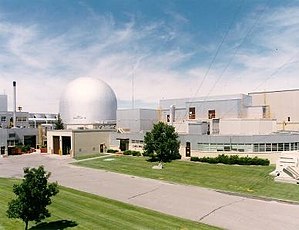 One promising startup is designing a reactor that will be powered exclusively by reprocessed spent fuel (aka nuclear waste). The company's name, "Oklo", was taken from an area in Africa where evidence suggests concentrated, naturally-occurring uranium in the soil was a source of 100kW of heat for millions of years.

Great question, Matt! My understanding is that, after completing an Environmental Impact Statement for the VTR's final design and location, the U.S. Department of Energy will issue a record of decision anticipated in late 2021, with construction starting in late 2022 and operations starting in late 2026. The fuels, materials, and sensors testing that will be conducted using the Versatile Test Reactor will have different locations in the reactor core and irradiation cycles depending upon the experiments' objectives. One timing advantage for the Versatile Test Reactor is that it will be able to accelerate irradiation experiment times compared to existing U.S. thermal neutron test reactors due to the higher neutron flux. The research and development findings that accelerate advanced fuels, materials and sensors research for existing and advanced reactor systems should start becoming available by 2028. However, even now, in the early design stage, VTR is pushing the technology forward in terms of design and safety analyses methods, full adaptation of digital engineering tools to nuclear design and construction, development of supply chain, and human resources necessary for future advanced reactors, especially for fast spectrum reactors.

Nicole, apparently I misunderstood. It was my impression participants in the program would each be supplying their own core, and would be able to test fundamentally-new technologies for generating electricity from nuclear fission. Is testing limited to fuels, materials, and sensors for fast neutron reactors?

Also, seems it would be difficult in a high-flux environment to separate radioactivity measurements, when multiple experiments are being conducted concurrently.

Hi Bob, There is lots of good information about the program here: https://www.energy.gov/ne/nuclear-reactor-technologies/versatile-test-re...