Research by Idaho National Laboratory scientists could help the nation accommodate more electric vehicles, while lessening the impact of vehicle charging on the electrical grid system.

Electric vehicle sales have grown rapidly in the last decade with 1.6 million all-electric and plug-in hybrid vehicles sold between 2010 and 2019. These climate-friendly cars will only get more popular as the newer all-electric vehicles have higher capacity batteries, meaning they can drive further between charging.

The availability of charging stations has not kept pace with electric vehicle sales, however and to meet demand 330,000 public charging stations need to be deployed by 2025. Plus, as battery capacity increases, so does the demand for the option for high-power charging, which vastly reduces the charging time.

As a result, public charging stations are trending toward high-power fast-charging plazas that can provide up to 20 fast chargers per site. A national goal is to one day be able to complete charging in 10 to 15 minutes.

CHALLENGES TO THE ELECTRICAL GRID

Although the availability of high-power fast charging stations will, most likely, boost the number of electric vehicles on the road, there’s a downside.  The power demands of these stations will place a significant and intermittent load on the grid, typically during peak operating hours.

About six high-power chargers draw roughly the same amount of power from the grid as a small hospital, and a typical fast-charging plaza, with potentially 20 such chargers will triple that demand. As more of these stations come online, they could disrupt the grid that delivers power to individual users.

But work at INL suggests another option. The Fast Charging Station Microgrids that the lab is modeling and simulating offer a more resilient and cost-effective solution to the issues of charging capacity and stress on the grid.

WHAT IS A MICROGRID?

A microgrid is a miniature energy grid that can operate independently or connect to the grid, and which can be powered by distributed generators, batteries or renewable resources. Some university campuses and communities have their own microgrids, and microgrids have been able to supply power when the standard electrical grid fails due to natural disasters or brown-outs.

Fast Charging Station Microgrids would consist of a number of high-power electric vehicle chargers, local generation in the form of solar photovoltaic systems, and local energy storage devices such as batteries. As such, they would provide a source of local power to charge cars during peak times and reduce demand on the grid.

“The microgrid is able to meet the electric vehicle’s load demand on its own, reducing the overall cost,” said INL researcher Anudeep Medam, who is leading the lab’s involvement in the Fast Charging Station Microgrids project. “And importantly, the microgrid can relieve congestion on the grid because the electric vehicles are charged from on-site resources. Another large benefit is that the charging is done with renewable energy, reducing the carbon footprint.” 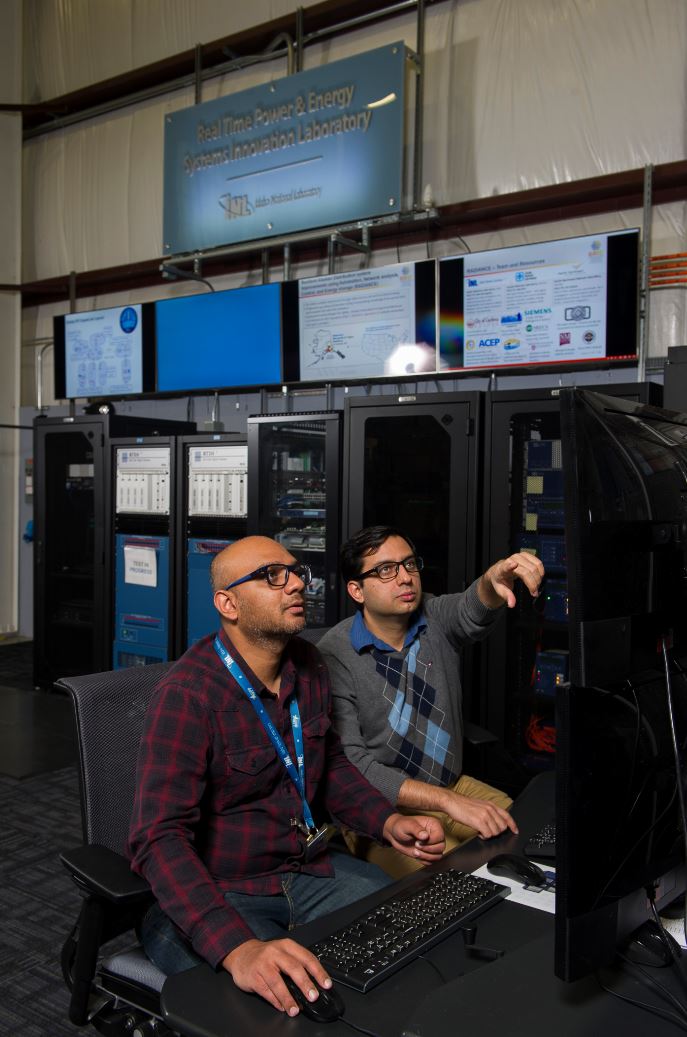 TESTING FOR THE REAL WORLD

In October 2020, INL scientists began working with XENDEE Corporation to design, model and simulate Fast Charging Station Microgrids for the optimal charging of electric vehicles while minimizing the impact on the electrical grid. The project is funded by the U.S. Department of Energy Office of Electricity, Microgrid Program.

As a first step, XENDEE researchers and engineers will design the charging station microgrids, which can operate independently or connected to the grid. INL scientists will then test and evaluate the model in INL’s Power & Energy Real-time Lab, which allows researchers to simulate how the prototype will operate in different demand scenarios. They do this by performing real-time Hardware-In-the-Loop (HIL) simulations—meaning simulations that incorporate actual hardware.

“Our ultimate goal is to show that this fast-charging station can act as a microgrid on its own,” Medam said. “And our tests are the next best thing to reality— we are replicating all the characteristics you would see in the real world in the lab.” 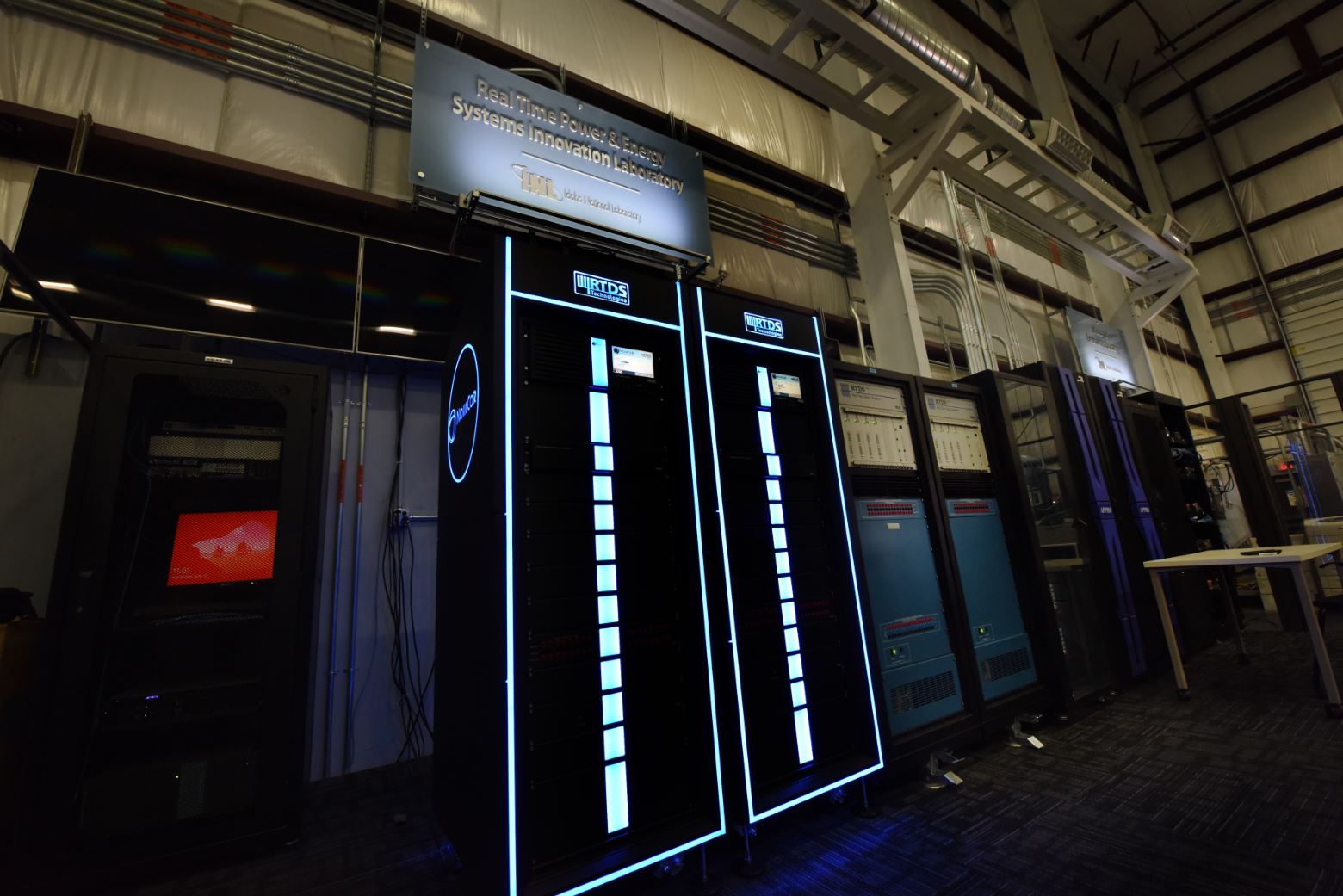 SUPPORTING THE CLEAN CARS OF THE FUTURE

Once INL scientists have established the best operating conditions for the model microgrid, the partnership will investigate other charging scenarios. Those alternatives will use different energy sources such as wind or geothermal energy and could be adapted to power large fleets, buses and trucks as well as cars.

"The output of this effort will deliver better accuracy for investors and ensure that more projects can be accurately tested for viability and brought to market with reliable benefits for all stakeholders,” said Adib Nasle, CEO of XENDEE. “We are proud to be developing this first-of-a-kind capability with INL."

The development of microgrids for fast charging vehicles will reduce the load on the electrical grid and could also be used to provide electricity back-up during peak demand, brown-outs or in storms. As such the microgrids help make the national electricity infrastructure more resilient and clean.

The microgrids can serve charging needs from an electric vehicle to medium-duty and heavy-duty electric vehicles. In the future, these fast charging station microgrids can be developed to serve large fleets at depots and along highways. With these stations at more locations, drivers will no longer need to be as concerned about traveling longer distances.

“Instead of having gas stations, you might have fast charging stations in every location,” Medam said.

Good article. I'm a believer in the importance of EV charging infrastructure. I've been the project manager for the West Coast Electric Highway (56 DC fast charging stations in Oregon and Washington) for many years. However, I'm not a believer in public EV charging infrastructure unless it's someone like EVgo, Electrify America, EVCS, and even Tesla (not really public). I don't like public level 2 charging stations because (1) we don't need them, (2) the business case doesn't exist, and (3) the existing utilization numbers for public L2 are terrible. What we really need are long dwell time residential and multi-unit dwelling L2 EVSE. Just as we need a chicken in every pot, we need a charger in every garage (and a bunch at every apartment building). Workplace is second on the hit list. These should be the focus for grid services, by the way -- for many reasons.

We often hear the 330,000 number requirement for public chargers. I think that's a disservice to the message we need to get out. We really need a few thousand public DC fast chargers, and probably no public L2s (okay, maybe a few, but not hundreds of thousands).

It would seem to me that Idaho National Laboratory could get real data, as opposed to simulation, and possibly speed development, by actually trying to work with an example flow battery, and seeing how charging with that works.  The source below suggests that flow batteries could have certain advantages over lithium ion batteries: