ESTA International (ESTA) is a leading provider of consulting services to the utility and energy industry worldwide with broad capabilities in strategy, technology, implementation, and management consulting. Stuart Borlase is a Principal Consultant with ESTA International consulting. He has over 25 years of experience in the modernization and business transformation of utility, energy and industrial...

No portion of the power grid has been impacted more by grid modernization than the electric distribution system. Grid modernization is transforming distribution system operations from manual, paper-driven business processes that have existed for many years, to electronic, computer-assisted decision-making with a high degree of automation. The grid is transforming from a more centralized generation system to one with a significant portion of demand supplied by Distributed Energy Resources (DERs) and enhanced grid resiliency and reliability with the addition of microgrids. The next generation distribution management system will need to incorporate more intelligence and advanced functionality to support these changes in the operation, monitoring and control of the future distribution grid. ESTA’s concept of the “DER-Enabled ADMS” will likely play an increasingly important role in the management of the distribution grid of the future.

Many utilities have implemented or plan to implement an Advanced Distribution Management System (ADMS). ADMS refers to a DMS (Distribution Management System) that incorporates OMS (Outage Management System) functionality and advanced “model-driven” distribution applications like on-line powerflow and volt-VAr optimization (VVO). Currently, the ADMS includes a variety of applications and functions to increase situational awareness, enable proactive response to incipient problems, and promote optimal reliability, efficiency, and overall performance of the electric distribution system. The ADMS typically includes SCADA facilities for distribution assets (transformers, switchgear, etc.), advanced applications for near-real-time analysis and optimization of the distribution system and outage management functionality, plus interfaces to external systems such as GIS and AMI that furnish information required by the ADMS applications. The ADMS is a decision support system to assist the distribution control room personnel with the monitoring and control of the electric distribution system in an optimal manner while improving safety and asset protection. Figure 1 shows the building blocks of a present-day ADMS.

Possible operating problems that may be experienced at higher DER penetration levels include (but are not limited to):

Distribution grids will need to support the requirements for microgrids to transition between grid-connected (grid-paralleled) mode and islanded mode. Microgrids that require “seamless” transitions without power interruption may require changes to the distribution utility’s automatic reclosing philosophy and other operating practices. Therefore, microgrid monitoring and management is expected to be part of the next generation distribution management system responsibilities, focusing on grid resiliency, reliability and outage management. While feeder protection and control schemes will need to account for DER and microgrid operating conditions, the next generation distribution management system may need to provide some overall integration, coordination and optimization of protection and control schemes on a substation or feeder basis, or in specific service areas. If the future distribution energy markets evolve to include transactive energy trading (peer-to-peer transactions) among customers on the distribution system, the next generation distribution management system may also need to play a role in the technical aspect of the energy transaction, such as verifying that the distribution electrical conditions and load flow will physically allow the commercial energy transaction to occur under current and forecasted system operating conditions.

More cost-effective sensors and enhanced protection control devices will increase visibility of the distribution system and will allow utilities to monitor and control the grid-edge in real-time, such as DER and microgrid connections and the customer interface. An IoT (Internet of Things) will be created by the ubiquitous deployment of these devices, which will require a significant investment in the communications infrastructure and advanced processing for edge-computing. Apart from an increase in the visibility of the distribution grid down to the customer, the next generation distribution management system will also have access to more data on the operating condition of the distribution assets and can make this data available to asset condition monitoring and asset management systems. With the increase in the number and interconnectivity of monitoring, protection and control devices, there are now more entry points for cybersecurity threats, and there will be more emphasis on data and communications security in the next generation distribution management system.

It is unlikely that the next generation distribution management system will incorporate all the monitoring, protection and control functionality for the distribution system, but it may include a hierarchical and distributed software architecture to provide more computing and data analytics capabilities at the grid-edge and support the necessary technical and commercial functions to operate the future grid.

A Distributed Energy Resource Management System (DERMS) provides centralized monitoring and control of DERs connected to a distribution grid by forecasting, monitoring, and managing the operation of each DER to satisfy operating and business objectives. The DERMS also manages the operation of DERs based on directives from the grid control entity or regulatory body and handles compensation of DER asset owners for their participation in grid control events. The current approach to monitoring and control of DERs by the ADMS is typically limited to near-real-time metering and “transfer-tripping” larger (utility scale) generators that are required (by IEEE 1547) to disconnect during distribution line outages to avoid “islanded” operation. Monitoring and control of other DERs (including smaller DERs such as rooftop solar generators, controllable loads, and energy storage) is usually not implemented in the ADMS for the following reasons:

A DERMS should include both “technical” and “commercial” functions:

To date, DERMS functionality has most commonly been implemented in a “standalone” system by third party aggregators that specialize in the grid-level management of customer owned assets. Aggregators enable owners of small scale DERs that do not meet minimum asset size requirements to participate in regional power grid markets, such as frequency regulation and other ancillary services. Aggregators serve as a “middle-man” between the end customer and the grid market operator to insulate customers from the complex rules for metering and verification and to handle incentive payments. In this approach, aggregators and distribution operators each need some level of DERMS functionality to manage the commercial and technical functionality of DERMS.

A standalone DERMS provides services for managing grid level events, but does not have the capability to manage localized distribution feeder problems and optimize the reliability, efficiency, and performance of individual substations and feeders. The latter capability is primarily the responsibility of the ADMS. Many of the ADMS applications require near-real-time information about the capacity, operating status and electrical outputs of DERs to accurately determine the distribution feeder electrical conditions and identify control strategies that may be used to avoid or mitigate the consequences of any operating problems. Most currently available ADMS solutions do not have enough near-real-time information about DER contributions to support these capabilities. For this reason, ESTA International introduced a new concept – the “DER Enabled ADMS” – which combines the best features of DERMS and ADMS to differentiate it from separate “stand-alone” ADMS and DERMS.

Incorporating detailed, real-time DER information in the ADMS electrical model improves situational awareness and ensures that the electrical impacts of all types of DERs are accurately accounted for in the ADMS advanced applications. ESTA International’s concept of the DER-Enabled ADMS is depicted conceptually in Figure 2 below. 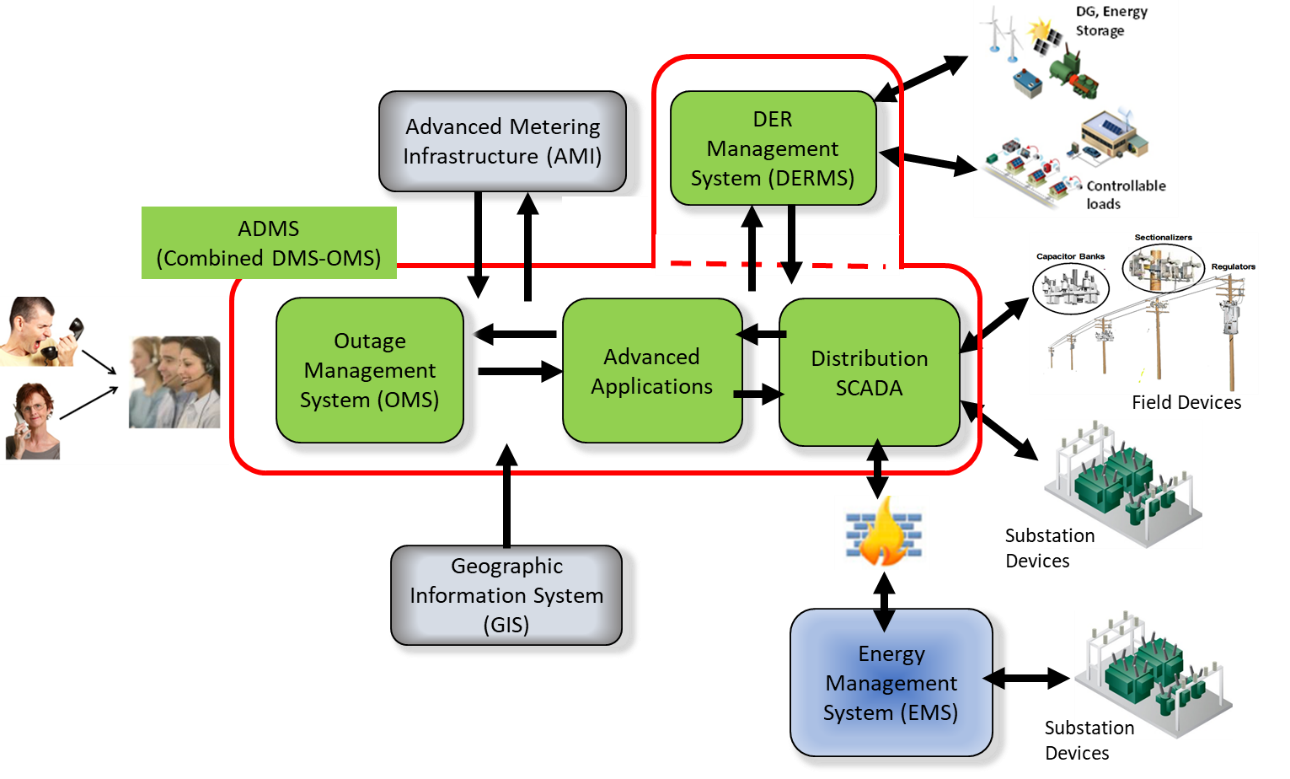 There are three basic approaches to accomplish the DER-Enabled ADMS: