Utility GIS is at a tipping point. What worked for the last 20 years will not be adequate for the next 20. 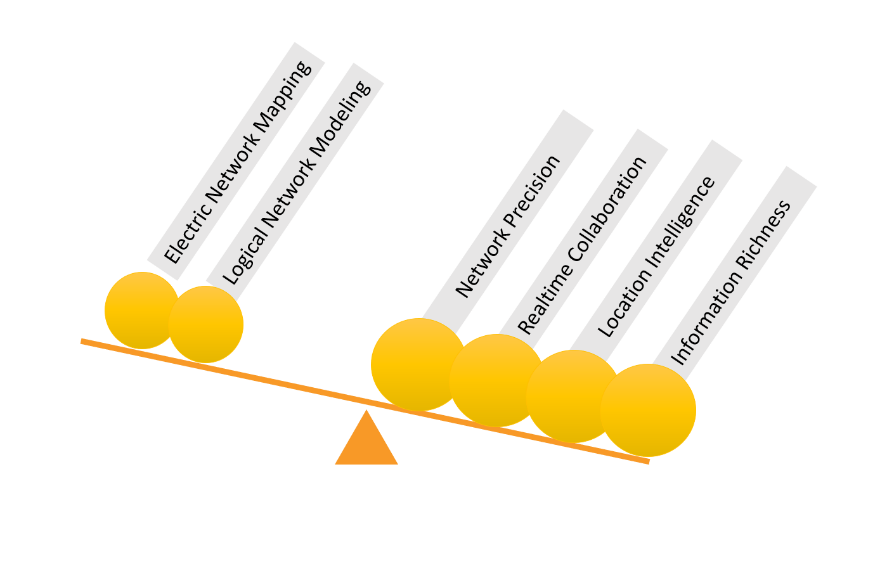 These challenges have location at their core.

Twenty years ago, GIS was about automating the mapping process and providing a degree of electric connectivity. The scales are now tipping to a more precise, collaborative, insightful, and information-rich GIS.

That's what Esri is delivering to meet these challenges.

In the past, cartography trumped network model precision. Esri's GIS supports both. It aligns with international industry standards such as the common information model (CIM). This includes separate structural modeling. It has standard data models. Connectivity is both explicit and implicit. It models terminals and complex switches. It replicates past, present, and near- and long-term states.

GIS needs to behave like social media. When an update to the network occurs in the field, those changes need to be seen by anyone in the company. Esri's new network technology is based entirely on web services. This provides universal access to the GIS system of record on any device, anytime and anywhere. This breaks the ancient habit of thinking about networks by staring at a paper map sheet. It aligns to how people and organizations work and collaborate using technology. This includes all stakeholders: the media, the government, customers, contractors, market operators, regulators, and labor leaders.

The tipping point—Esri GIS is emerging as the system of collaboration for utility workflows.

Interconnected information, processes, and workflows happen at the same time. Esri's GIS is not just about maps or even network models. It is about discovery. It is about gathering new information that is critical for business success. Often that information is hidden. Esri GIS has the unique ability to provide analysis based on location. It answers questions: Where are network vulnerabilities? Where are emerging issues? Where will the next crisis occur? Where will electric charging stations emerge? Where will solar installations occur? Where could the network fail should distributed resources accelerate in a region? Where will customers demand better service? Where will wildfires threaten network integrity?

The tipping point—Esri GIS lets utilities see what others can't.

Simon Sinek is one of the great thought leaders of our time. He stated:

"More information is always better than less. When people know the reason things are happening, even if it's bad news, they can adjust their expectations and react accordingly. Keeping people in the dark only serves to stir negative emotions."

There is so much information available to utilities today. Yet that information comes from different sources. It exists in different organizations. It has different forms. It comes from all kinds of devices, such as IoT sensors, drones, and satellites. It resides in marked-up, as-built substation drawings buried in piles in remote buildings.

Esri GIS can access data from neighboring utilities, like other electric, water, gas, and telecommunication companies. It can include market operators. It consumes data directly in real time using web services. It can learn about potential hazards from first responders. In addition, it isn't limited to the conventional network data owned by the utility. It accesses data from external sources. That data may be unstructured and big.

Even building information management (BIM) data is easily incorporated into Esri's GIS. The integration of CAD and GIS is accelerating rapidly.

To paraphrase Sinek, having this wealth of information incorporated into a modern utility GIS gives utility executives, managers, and skilled workers so much more awareness of their network in relation to its surroundings.

The tipping point—Esri GIS consumes information so that stakeholders are never kept in the dark.

Here are some myths about moving from a legacy GIS to the new Esri GIS:

Electric utilities realize that the industry is at a tipping point. So, too, is utility GIS.

Learn more about how GIS is a lot more than mapping or logical network modeling by downloading our free e-book.

Matt commented on ...
Four Take-aways From the GIS Applications Summit

Today, location-aware apps are prevalent across modern society. Even individuals with very little disposable income routinely rely on them.

Jason commented on ...
Four Take-aways From the GIS Applications Summit

GIS is even more vital in today's distributed world. Those chosen few in the utility world who focus on providing expertise in GIS will become...

What is also missing, Bill, is the right strategy and implementation of the same. Imagine a strategic statement such as: