Congress recently passed the bipartisan Infrastructure Investment and Jobs Act, and the Senate is now considering the much broader Build Back Better Act which Democratic leadership intends to pass through reconciliation—meaning every Senate vote counts. The Build Back Better Act includes climate and clean energy provisions that, if enacted, could help put the United States on the path to a stable climate future while creating hundreds of thousands of new jobs. To meet U.S. climate goals, Congress must come together and pass this legislation.

Updates to recent Energy Innovation modeling confirms the legislation under consideration (referred to together as the “Infrastructure Bills”) could cut economy-wide emissions by 828 to 1,090 million metric tonnes (MMT) by 2030—equivalent to taking all U.S. cars and light-duty trucks off the road for an entire year.

The research also shows including a Clean Electricity Performance Program (CEPP) would reduce emissions an additional 250 to 500 MMT. Though Senator Joe Manchin has expressed opposition to the CEPP, several replacement options are being discussed but have not yet been proposed, so they are not included here.

The Energy Innovation modeling also finds the Infrastructure Bills’ climate and clean energy provisions would generate significant benefits for Americans, creating 506,000 to 744,000 new jobs in 2030. Relying on greater shares of clean wind, solar, and storage for electricity would also dramatically improve U.S. air quality, avoiding 3,600 to 4,800 premature deaths and 100,000 to 136,000 asthma attacks in 2030. These avoided deaths would be more concentrated in communities of color, benefitting frontline communities that have been disproportionately harmed by air pollution.

A majority of U.S. voters support strong climate action needed to hit this goal, especially after one in three Americans experienced an extreme weather event this summer. Earlier this year, the Biden administration committed to slashing U.S. GHG emissions 50% to 52% below 2005 levels by the year 2030 in its Nationally Determined Contribution (NDC), in line with the IPCC recommendations.

The Infrastructure Bills would deliver a historic clean energy investment to meet this goal, generating hundreds of thousands of jobs and directing significant funding to disadvantaged communities. These bills could also deliver the most significant emissions reductions in U.S. history, laying a foundation to achieve the 2030 NDC target.

However, more action will be needed to achieve this goal, especially in the absence of the CEPP, which aimed to achieve at least 80% clean electricity by 2030. But building on the emissions reductions secured through legislation, additional regulatory and state action could push the U.S. even further toward its climate goals, while expanding the clean energy economy for generations of Americans.

To understand how the Infrastructure Bills could contribute to U.S. climate goals, Energy Innovation used the U.S. Energy Policy Simulator (EPS), our non-partisan and open-source climate policy model. The EPS uses public data to evaluate the impacts of dozens of policies on GHG emissions, costs and savings, public health benefits, and jobs.

While the Infrastructure Bills contain many climate and energy provisions, Energy Innovation focused its analysis on provisions that are expected to secure major GHG reductions or those that are easily quantifiable. 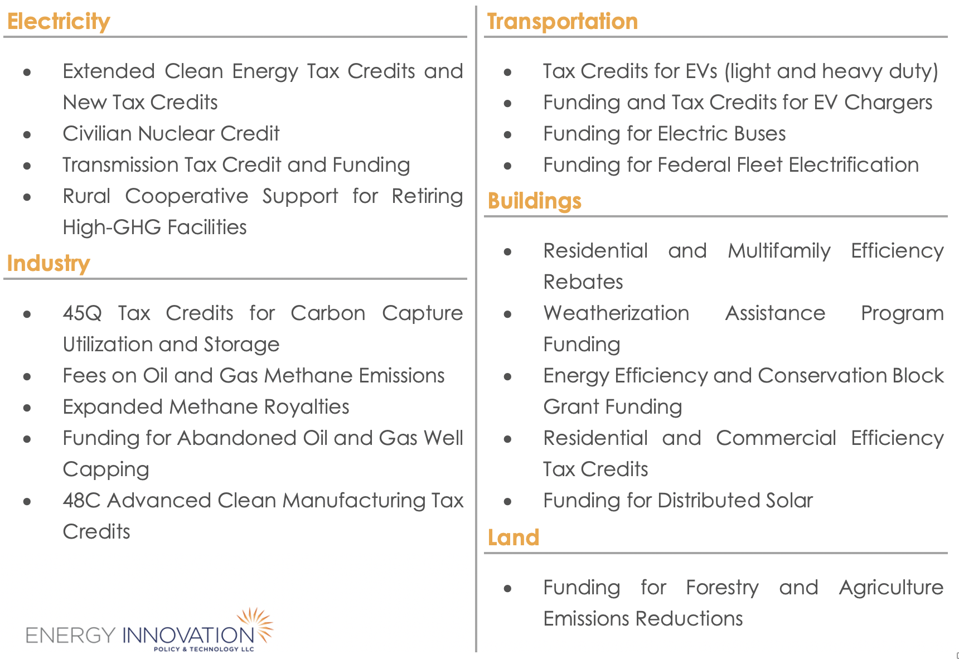 Not all of the climate provisions were modeled because of the difficulty of modeling funding for some broad programs, which means the emissions reductions and jobs created are both likely to be larger than what we project. Particularly promising policies outside the scope of this modeling include the Greenhouse Gas Reduction Fund that sets aside $27.5 billion to create a national green bank, funding for the U.S. Department of Energy’s Loan Programs Office, and a sustainable aviation fuel tax credit.

The modeling includes Low, Moderate, and High scenarios with different assumptions about how fast the electricity sector will transition under these provisions, as well as the size of tax credits for certain technologies. For example, while tax credits will be available for all electric vehicles (EVs) and clean power plants, the size of the credit depends on thresholds for union participation, prevailing wage rates, and domestic manufacturing requirements.

EPS modeling finds that emissions drop significantly under the Infrastructure Bills, with reductions ranging from 32% to 36% below 2005 emissions in 2030 and cumulative reductions of 5,282 to 6,391 MMT, equal to at least one year of U.S. carbon dioxide emissions.

Without the CEPP, the strongest provision in the Moderate Scenario, detailed below, is the clean energy tax credits, which would incentivize renewables deployment. A fee on methane emissions and incentives for EVs and charging equipment also provide significant emissions cuts. 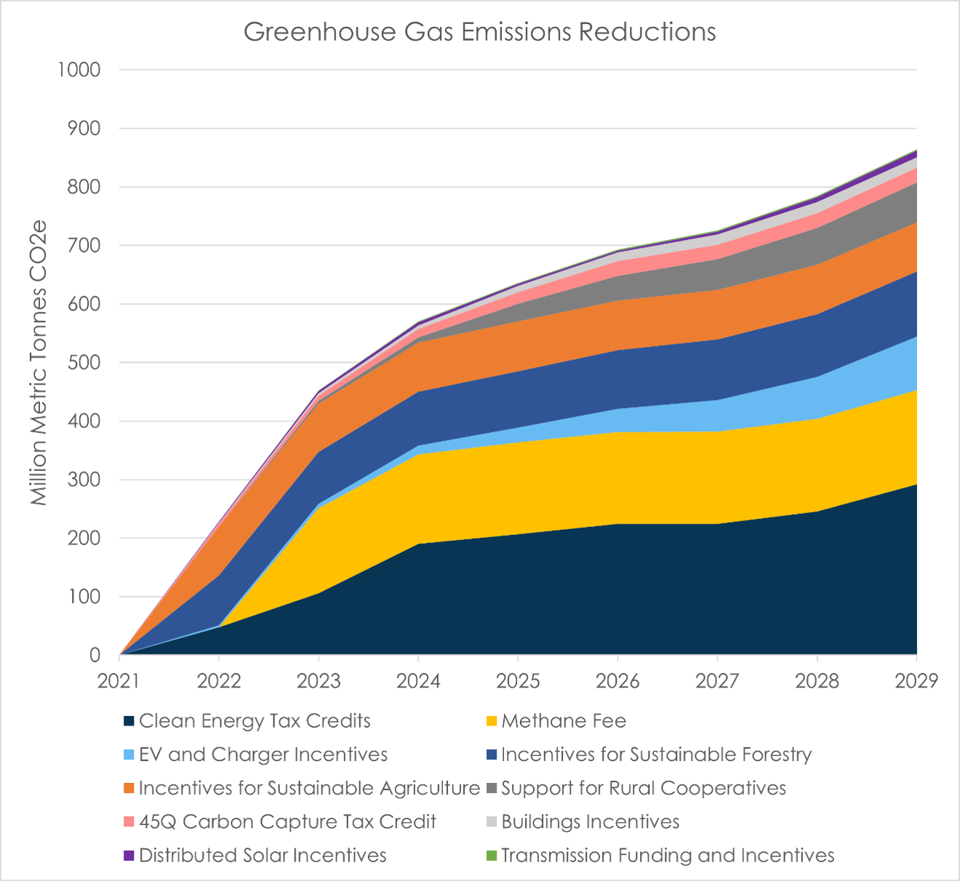 Clean energy without the CEPP

Other important sources of emissions reductions

The second strongest provision is the methane fee of $60 per tonne of carbon dioxide equivalent (CO2e), which contributes roughly 17% of the modeled emissions reductions and helps achieve U.S. commitments laid out in the recent Global Methane Pledge. Methane, which has a global warming impact 28 times greater than carbon dioxide, can leak into the atmosphere during oil and gas production, transmission, distribution, and during consumption, making up a significant share of U.S. emissions.

Our modeling shows a methane fee of $60 per tonne as proposed leads to a nearly 70% reduction in methane leakage from the oil and gas sector. The actual potential may be even greater, as several organizations have found actual methane emissions are larger than current U.S. Environmental Protection Agency (EPA) estimates.

Transportation electrification spurred by EV and charger incentives is another important source of emissions reductions, contributing 12% of total reductions. However, it’s important to note that because vehicles can last 10 to 20 years, emissions benefits will continue to grow past 2030 as older, internal combustion engine vehicles are replaced.

Although incentives will push EV costs well below those of gas-powered vehicles, additional factors such as concerns around charging availability and EV range influence consumer purchasing decisions. For these reasons, strong federal vehicle emissions standards under development by the U.S. EPA will play an important role in meeting President Biden’s goal of 50% zero-emission vehicle sales by 2030.

The modeled policies would represent a historic economic investment, resulting in a surge of clean energy projects and domestic manufacturing. Our modeling finds 506,000 to 744,000 additional jobs in the year 2030, concentrated in manufacturing, construction, and service industries. And this reflects only the modeled provisions – meaning many billions that would spur additional job growth are not captured in this analysis.

Slashing fossil fuel consumption would also reduce harmful pollution that leads to negative health outcomes. EPS modeling finds these policies would avoid 3,600 to 4,900 premature deaths annually by 2030, in addition to 100,000 to 136,000 avoided asthma attacks and 404,000 to 548,000 avoided lost workdays. As a percentage decrease, most of the avoided deaths are concentrated in communities of color, which have borne the disproportionate burden of polluting facilities.

The U.S. is at a critical decision point, and the Infrastructure Bills represent a historic opportunity to build a foundation for its commitments under the Paris Agreement.

EPS modeling suggests the climate and energy provisions in these bills could lead to emissions that are 32% to 36% lower than 2005 emissions, with just a handful of these policies delivering the lion’s share of reductions. When combined with further action by regulatory agencies and state and local governments, the Infrastructure Bills could achieve the U.S. NDC of a 50% to 52% emissions reduction.

While the proposed Build Back Better Act is discussed, our modeling shows important provisions including the clean energy tax credits, the methane fee, and EV incentives could help put the U.S. on track to emissions cuts in line with what the science says is required, while also creating hundreds of thousands of jobs, and protecting public health. To realize these benefits in full, Congress must include strong climate and clean energy provisions in the Infrastructure Investment and Jobs Act and the Build Back Better Act.