How to Electrify Your Life: Getting Started at Home (Part 1 of 2)

Sara is Energy Innovation’s Director of Electrification Policy, where she leads the firm’s electrification policy practice area in tandem with the Power Sector Transformation program to develop a...

Want to electrify your life and not sure where to start? Then tune in to a special two-part series of Electrify This! to find out how you can cut pollution and save money by making the switch to clean, efficient electric alternatives. Host Sara Baldwin speaks with Joel Rosenberg, the author of the new e-book called Electrify Everything in Your Home: A Guide to Comfy, Healthy, Carbon-Free Living, and Panama Bartholomy of the Building Decarbonization Coalition about the steps homeowners and renters can take to transition to a clean, electrified life. We’ll also discuss the big electrification wins of 2021 and the new The Switch is On campaign aimed at helping households and contractors plug in to the electrification movement.

To Dig in Deeper, Check out these Must-Read Resources:

Joel's guidance to begin electrification with an EV is sound advice.  But the timing for electrification of everything else (including the next-in-line heat-pump) should be dictated by the regional grid mix.

Perhaps Joel and Sara live in California, which has done a pretty good job of getting the coal off the grid (ignoring imports, which come from "who knows where"); but California still uses a lot of fossil gas and a bit of biomass.  In contrast, Ontario Canada, Norway, France, Sweden, Switzerland, and Paraguay also have very clean electricity, most other places are nowhere close (source).

Climate activists encourage us to focus on reducing CO2 emissions, but reducing air pollution from combustion (e.g. particulates, sulfur oxides, nitrogen oxides, and mercury), is also an important issue as they are a near-term threat to human health.  Methane (the dominant component of fossil gas) burns much cleaner than coal, oil, or biomass.  So switching to EVs can reduce pollution, even if there is a large amount of fossil gas or even a modest amount of coal still in the grid mix.

As Joel points out, home appliances often last 20 years, so we have to plan for the future grid, not today's.  However, we should differential between locations with a legal coal elimination mandate from those which are gradually reducing it using market forces.  When market forces prevail, coal-fired plants will be held in reserve, to be throttled up for demand peaks, such as the winter time demand peak driven by home and building heating.  In regions that use coal only to meet such peaks, we can think of the incremental load of home heating and cooling as being largely coal-powered.

Even in grids with zero coal, we have to consider the fossil gas component of grid electricity in the electrification decision, for CO2 or air pollution.  For space heating, a heat pump can move 3 kWh of heat for 1 kWh of electricity; that more than offsets the efficiency loss when electricity is made from electricity, so heat pumps are clean even in 100% gas grid.

Unfortunately, other electric appliances such as water heaters and clothes dryers use resistive heating elements which are "only 100%" efficient.  So if the grid is 50% non-emitting and the rest fossil gas, there is no advantage to electrification since the average gas-fired plant efficiency is 50%, which offsets all the benefit of the clean generation.  The 4x higher cost of electricity versus gas also argues against electrification of these 100% efficient appliances.

My regional grid has a mix of windpower, fossil gas, and coal fired plants, with no coal-elimination mandates.  So there's an EV in my future, but my other appliances will stay gas powered for now.

Unfortunately, other electric appliances such as water heaters and clothes dryers use resistive heating elements which are "only 100%" efficient.

You should switch to electric appliances whenever you need to replace your gas appliances or sooner if you want to eliminate the unhealthy indoor pollution these devices cause.

Heat pump water heaters use electricity to move heat from one place to another instead of generating heat directly. Therefore, they can be two to three times more energy efficient than conventional electric resistance water heaters. To move the heat, heat pumps work like a refrigerator in reverse.

Natural gas stoves cause a LOT of indoor pollution and release methane into atmosphere.

Also just curious - what is your regional grid?

I should have said "the great majority of electric water heaters and clothes dryers are only 100% efficient".

It sounds like these devices are like hybrid cars and compact florescent lights (CFLs); when they first came out, advocates said they'd soon dominate the market.  It hasn't happened yet for cars and CFLs have already been replaced by more consumer-friendly technology (LEDs).

Heat-pump water heaters (with indoor source air) could be a good fit in a large unfinished basement where they won't simply transfer their heat demand to the home heating system by venting cold air into the home in winter (granted they help cool the home in summer).  And like heat-pumps for space heating, they rely on inefficient resistive heating when a power boost is needed.  BTW, garages are not a good fit for them either; the DOE recommends a temp range of 40º–90ºF, which won't work where I live.

Maybe heat-pump dryers will catch on eventually?  Unfortunately, many of the early offerings trade lower-temp heat (resulting in slower drying time) to achieve lower energy bills; mainstream consumers may not like that.

I still believe that for space and water heating in a decarbonized world, district heat networks (powered by waste heat from nuclear power plants) are the best answer in urban and suburban settings.  It's usually better to use a simple mechanism to utilize a cheap energy source (like a cheap fuel or waste heat) than to start with expensive high-grade energy (electricity) and try to optimize efficiency using complicated stuff (simple mechanisms tend to lower the up-front cost which makes home ownership accessible to more people).

FYI, my grid is the Southwest Power Pool.

BTW, garages are not a good fit for them either; the DOE recommends a temp range of 40º–90ºF, which won't work were I live.

I know they are selling plenty of these in the Midwest.  Also, I personally know of one that was recently installed in Chicago - however as you mentioned -  it was installed in basement utility room.

I should have said "the great majority of electric water heaters and clothes dryers are only 100% efficient".

I don't know of exact breakdown for heat-pump vs old school electric but here are stats on gas vs electric. Still pretty new - let's see how things evolve over coming decade.

My regional grid has a mix of windpower, fossil gas, and coal fired plants, with no coal-elimination mandates

As for SPP grid - getting cleaner every year. Coal will continue to decline and should be near zero by 2035. Just because there are no coal closure mandates doesn't mean that utilities aren't planning on closing coal.

Every Moves Up Timeline to Close Coal

Evergy officials say the utility plans to close two coal-fired plants in the next nine years as part of its effort to reduce its use of fossil fuels. The utility will close its a coal-fired plant near Lawrence by the end of 2023. The plant is Evergy’s oldest, with its remaining units dating back to 1960.

Evergy also will close Unit 3 of the Jeffrey Energy Center near St. Marys, Kansas, in 2030, rather than in 2039 as originally planned

Evergy plans to replace the 1,153 megawatts of power from fossil fuel generation with 3,200 megawatts of wind and solar power by 2030. 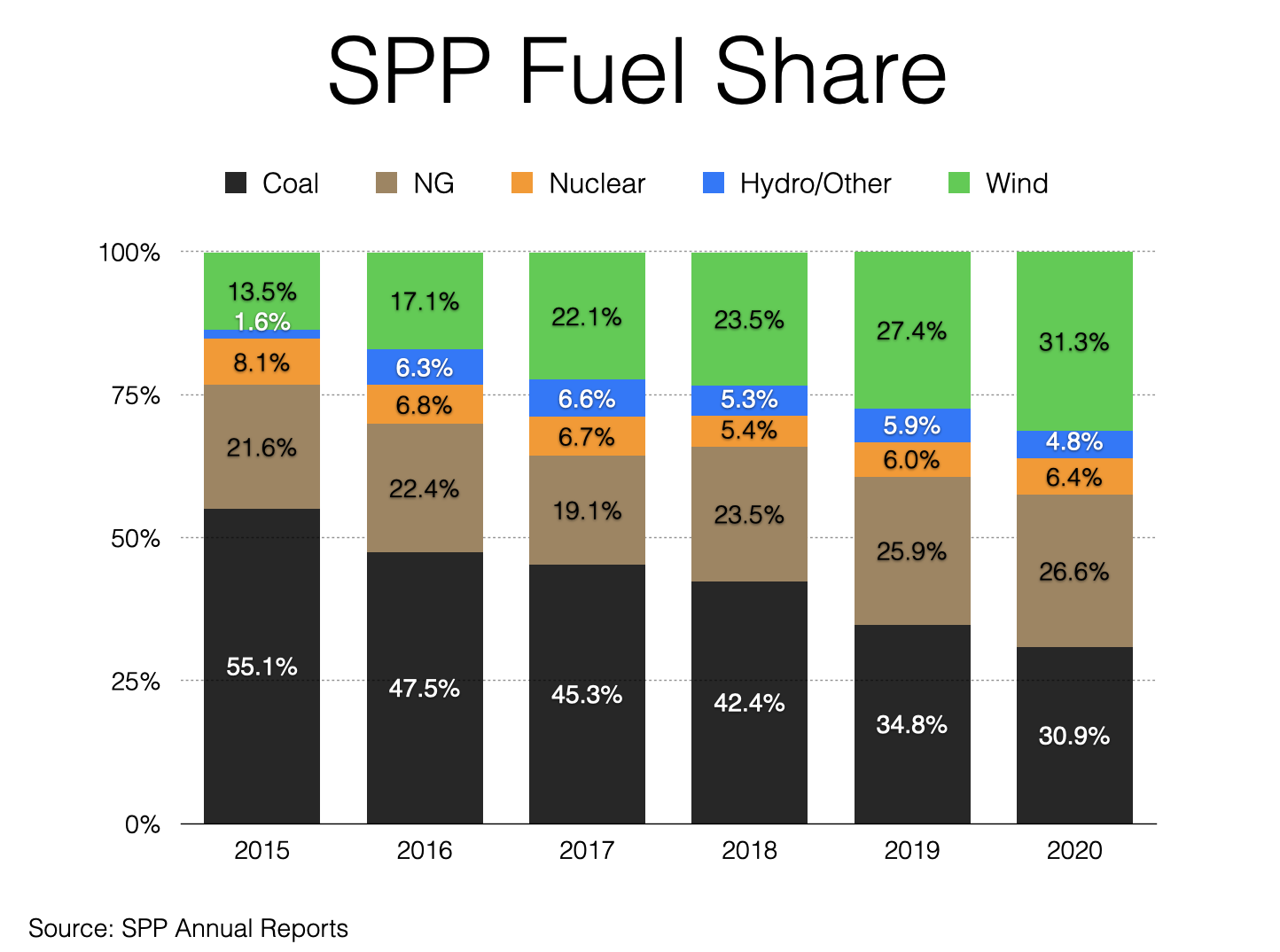 Gas vs Electric water heaters, from Joe's link to AHRI (I suspect that the gas heater market share is even greater by energy usage, since it makes sense for heavier user to switch to gas, which is cheaper, e.g. apartments are probably more electric and homes more gas):

(I suspect that the gas heater market share is even greater by energy usage, since it makes sense for heavier user to switch to gas, which is cheaper, e.g. apartments are probably more electric and homes more gas):

Yeah.. would be interesting to see

- energy usage - as you said