Congress Is At A Fork In The Road: Fuel Dictators And Climate Change, Or Help Americans Drive Electric

Advancing innovative policy to save our climate. Board Vice Chair at the International Council on Clean Transportation. Board Member at Veloz

President Biden’s brave decision to halt Russian oil and natural gas imports in response to the unprovoked Ukraine invasion shows the United States stands in solidarity with democracies everywhere. But how will this decision impact the U.S. economy, gas prices, or heating bills?

While Americans might already be feeling some short-term pain at the pump, passing the electric vehicle (EV) provisions currently being considered in Congress would help end our dependence on volatile foreign oil supplies and protect consumers from oil price spikes over the long-term. Research from Energy Innovation shows that these EV incentives, if passed by Congress this year, would dramatically reduce our dependence on Russian oil in just 36 months and more than eliminate it in five years.

It's also clear that pouring billions into increasing U.S. oil production won’t help Americans. Increasing domestic output would take up to three years to ramp up, as the industry itself has admitted. But even if the U.S. were to double domestic production, oil is a global commodity with a single price set by the highest bidder on commodity markets, and it flows across borders seeking demand.

That means American consumers would still be stuck in this vicious cycle of volatile gas prices, at the mercy of petro-state dictators ranging from Russia to Saudi Arabia to Venezuela. 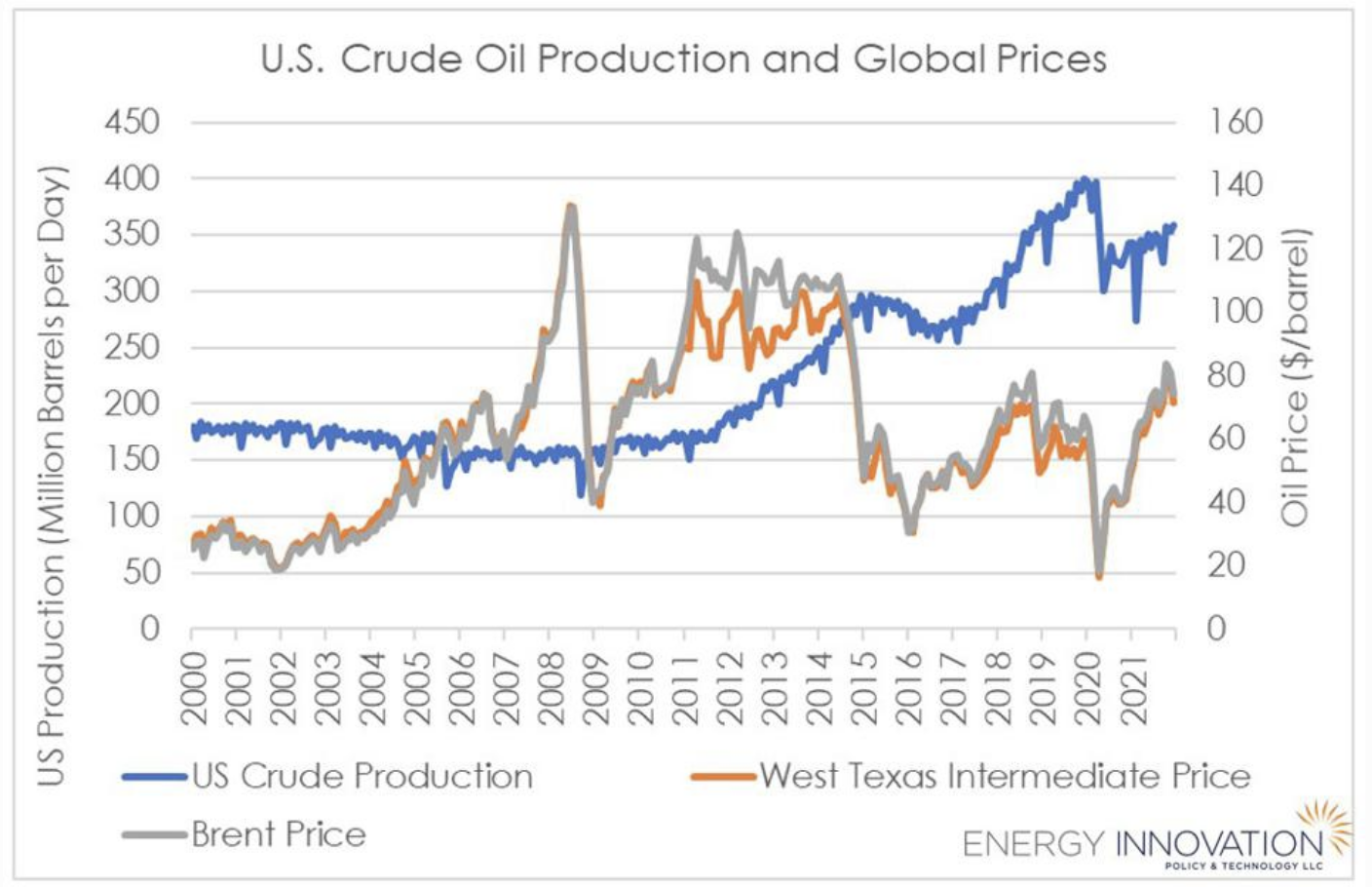 Congress can break this cycle for good by enacting EV policies that would weaken dictators, put money back in our pockets, and dramatically reduce pollution that harms our health and fuels dangerous climate change. EVs already cost less to operate than gas vehicles, saving drivers about $500 per year than new gasoline cars at $3 per gallon gasoline, and when gas prices are above $5, EVs save drivers $1,500 every year. With national gas prices running between nearly $6 and nearly $4 per gallon, Americans could use that help today.

The proposed tax incentives would cut EV prices an additional $7,500 through the rest of this decade, making them even more affordable for a greater number of consumers. Our modelling shows the lower price would mean 61 million more Americans would choose a clean EV instead of continuing to fund petro-state aggressions. The gas savings would help working families while cutting demand for up to 180 million barrels of oil per year by 2030 that we wouldn’t need to buy from any foreign country.

We can also do all this while saving the climate. Our research shows that the Congressional provisions under consideration would cut planet-heating emissions by 1.2 gigatons in 2030—equivalent to about 20% of pre-pandemic U.S. emissions. It would also dramatically reduce tailpipe pollution that kills 20,000 Americans every year.

So why should we double-down on oil production that handcuffs consumers to volatile oil prices and accelerates the climate crisis, when we could instead help more Americans own their first 100% clean car and save money? Doing anything else seems like a food’s errand. 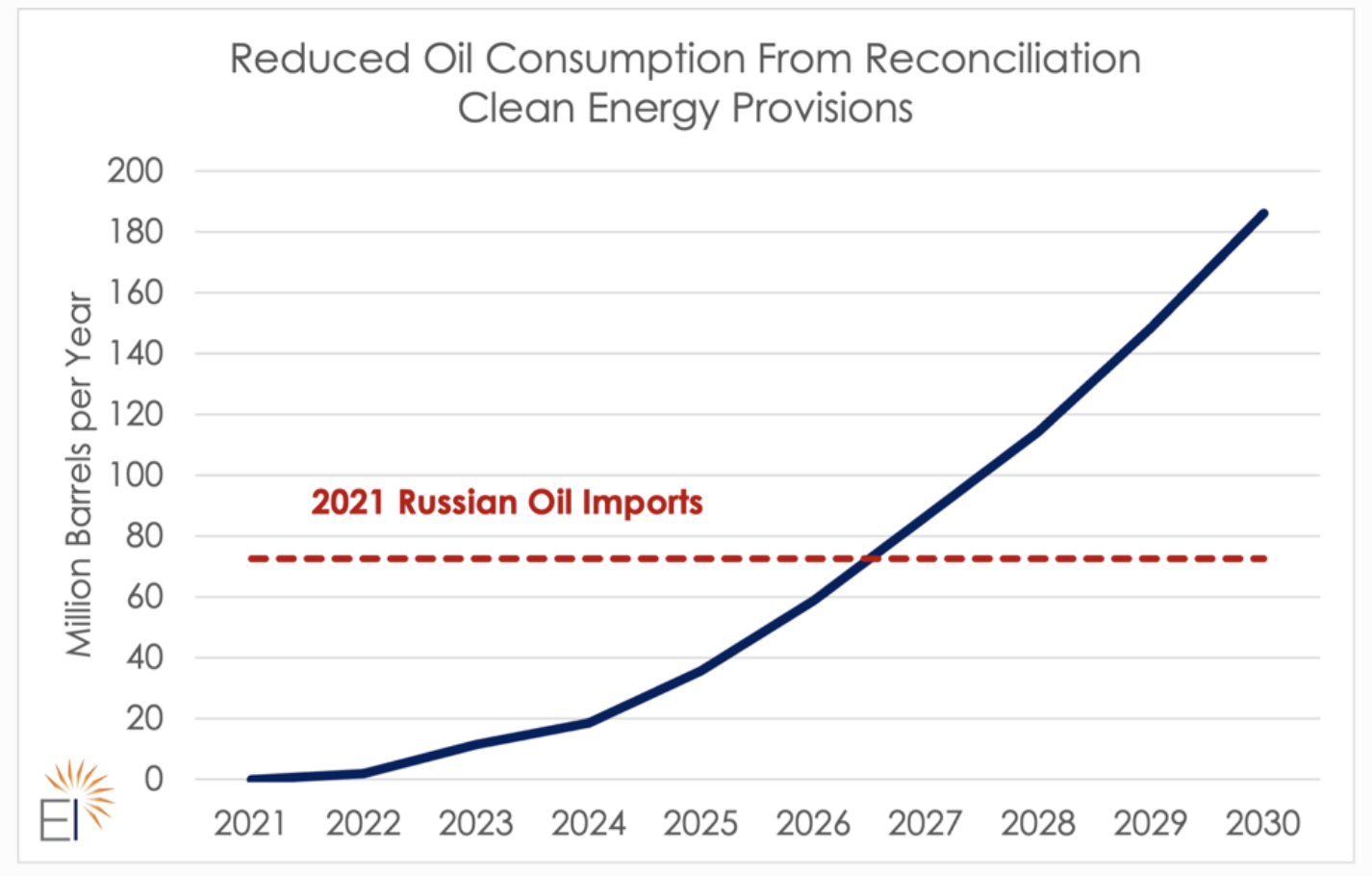 But Congress must act immediately to realize these benefits. Every new car purchased lasts about 13 years—meaning every decision to buy a gas-powered car this year would leave millions of Americans beholden to oil prices for more than a decade. Even if 100% of all new cars were electric by 2035, we still wouldn’t have a completely electric fleet of vehicles on our roads until 2050.

This capital stock turnover problem must be overcome to wean ourselves off foreign oil – and fight climate change.

If Congress includes these incentives in its reconciliation package, our country could be entirely free of any dependence on Russian oil by 2027. If these incentives are further supported by strong greenhouse gas standards for cars and trucks from the U.S. Environmental Protection Agency, we can realistically end our dependence on oil for good before 2050.

President Biden has outlined a plan for 50% of all vehicle sales to be electric by 2030 and the U.S. EPA can set tailpipe pollution standards starting in 2027 that would help us reach 100% all electric sales by 2035, especially as EVs continue to decline in cost.

Putin’s violent invasion of Ukraine is a terrible tragedy. While we must do all we can to help the Ukrainian people, let’s not miss the fundamental lesson. Putin has accumulated power by selling climate-destroying fossil fuels to the world. Until recently, most of us had little choice but to power our daily lives with oil.

But all that has changed—oil-free, climate-safe transportation is now readily available and EVs exceed gas car performance by many measures. If federal policymakers take swift action now, we can all drive clean soon, knowing our hard-earned dollars never again fuel dictators funded by oil revenue.

"That means American consumers would still be stuck in this vicious cycle of volatile gas prices, at the mercy of petro-state dictators ranging from Russia to Saudi Arabia to Venezuela."

Of course, this would leave us even more dependent on rare earth minerals dictators such as China.

Agree with the post on rare earth mineral risk...

However, we have sufficient nat gas reserves in the Marcellus Shale to cover power and heating needs... until nuclear is accepted - the only reliable carbon free option

Finally, this policy position seems to ignore the massive investments needed in power infrastructure to routinely charge these vehicles...