While the politics of climate policy may ebb and flow, one of the most promising trends toward cutting emissions to avoid the worst impacts of climate change is the unprecedented shift of corporate financial decisions from fossil fuel to clean energy.

His new book, Speed & Scale, applies this philosophy toward confronting the climate crisis by reaching net-zero global emissions by 2050 and getting halfway to that goal by 2030. Energy Innovation’s Communications Director Silvio Marcacci asked Doerr about his new book, and how measuring what matters can help cut emissions.

Q: There’s no shortage of reading material on the climate crisis and perils of global warming. Why did you write Speed & Scale?

The world is on the brink of disaster. The pressing question on many people’s minds is: What can we do about it?

What we’re doing today is not enough. To limit global warming even close to 1.5 degrees Celsius, the red line for avoiding runaway climate change, we need more urgency and ambition. More than anything, we need a plan. We’ve got lots of goals and targets, and good ones at that. What we lack is a clear way forward that aims squarely at the countries and sectors emitting the most greenhouse gases and can do the most to abate them. 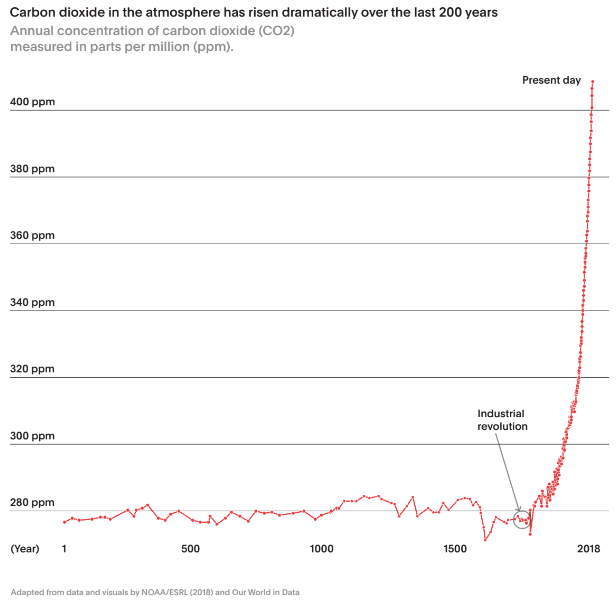 Speed & Scale is a blueprint for how to eliminate the heat-trapping carbon spewed into the atmosphere—before it’s too late. As I gathered research for the book, I frankly found myself terrified. But I was also inspired by climate warriors on the front lines, from familiar names like Jeff Bezos, Bill Gates, and Christiana Figueres to entrepreneurs like Ethan Brown at Beyond Meat and intrapreneurs like Orsted’s Henrik Poulsen, who set the pace for offshore wind. Their stories show us a path to net zero by 2050, the deadline set by the Intergovernmental Panel on Climate Change.

Q. You just returned from the COP26 climate summit in Glasgow. Some observers are disappointed we haven’t seen a more aggressive guarantee to reach net zero emissions by 2050. What was your biggest takeaway?

A: I was heartened by two pledges with a 2030 deadline: to cut methane by 30%, and to end all deforestation. While pledges don’t automatically deliver policies and dollars, these shorter-term targets will test nations’ willingness to act in this critical moment. If we don’t succeed in cutting emissions in half by 2030, there’s no plausible way to make that 2050 deadline. When government policies lag, as is generally the case today, citizens and corporations both must step up to speed our progress. We need more pressure from mass movements, more funding from investors, more innovation from entrepreneurs. 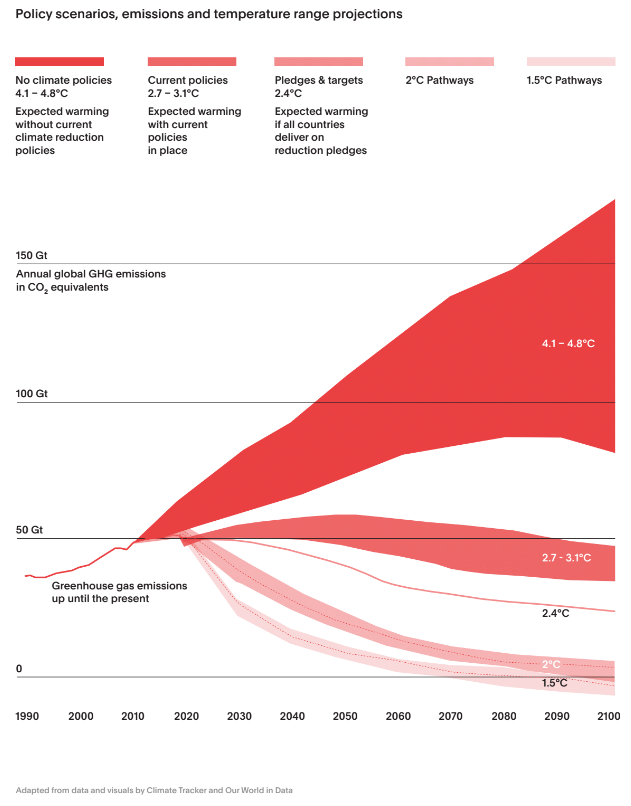 Q: Given all the complexities and obstacles to climate action, what gives you confidence that any plan can work?

A: Speed & Scale is organized around six big solutions that account for all 59 gigatons (Gt) of annual emissions. We can get most of the job done by electrifying transportation; decarbonizing the power grid; fixing our food and agriculture system; protecting our forests, oceans, and other natural ecosystems; and changing the way we make things like concrete and steel. We also have to figure out how to remove the last 10 Gt of stubborn carbon that are too difficult to cut. To get to net zero carbon by 2050, we’ll rely on four accelerators: policies, movements, innovation, and—not least—investment.

My message is simple: Solving climate change is the greatest economic opportunity of our lifetimes and will create a net gain of 25 million jobs by the end of the decade. But if we fail, the costs to humanity will be staggering. Global warming is already destroying whole economies. Over the last year, flooding cost $27 billion in China and $30 billion in Europe, while Hurricane Ida alone cost up to $95 billion. How much more devastation must we endure before we realize it’s time for drastic action?

Q: How do you respond to critics who say we can’t afford a fast-tracked transition to clean energy?

A: I find it useful to track a metric Bill Gates calls “the green premium”: the added cost of a given product’s cleaner alternative. Given the plummeting cost of renewable energy, as well as the price of batteries, the green premium for many products will soon become a green discount. Solar and onshore wind energy are already cheaper than coal, which helps explain why China stopped financing overseas coal-fired power plants. Coal can no longer compete. 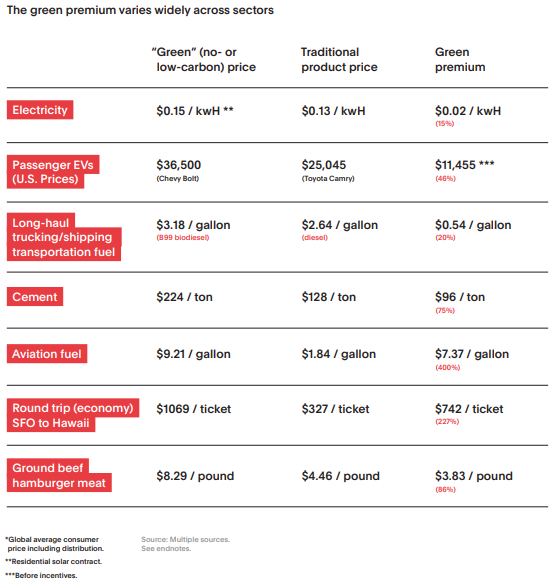 According to the International Energy Agency, the clean energy transition will cost $4 trillion per year over the next several decades. That’s a big number, but it pales against the toll of greenhouse gases. Adding in mass migrations, armed conflicts, extreme weather damage, crop destruction, and deadly air pollution, the latest estimates of the “social cost of carbon” range up to $10 trillion annually. So here’s the truth: It’s way cheaper to save the planet than to ruin it.

Q. Your venture capital firm, Kleiner Perkins, has backed cleantech startups since 2006. How have you fared, and what lessons have you learned?

A: Our first round of cleantech investments suffered early losses. We were early to the party, and then the sector fell apart amid the financial crisis of 2008. Oil and gas prices plunged, credit was scarce, and U.S. companies were undercut by subsidized competition from China in solar panels. For a while it looked like our clean energy portfolio might be wiped out.

Then a few of our companies crawled out from under the wreckage: Proterra, Nest, Chargepoint. We broke through in 2019 with the initial public offering of Beyond Meat, the plant-based protein company. Two years later, the value of our Beyond Meat shares stands at 80 times our original investment. At last accounting, our total stakes in cleantech had tripled in value, to $3.2 billion. And we’re no longer wandering alone in the wilderness. In the first three quarters of 2021, $37 billion in global venture capital went into cleantech. It’s not a bubble, but a boom.

What have we learned from this roller coaster? First, cleantech investments require longer time horizons and significantly more capital than most. Second, founders and investors should remove the main risk up front, whether it’s technology risk (it won’t work), market risk (it won’t stand out), consumer risk (it won’t sell), or regulatory risk (it won’t get approved). Third, most consumers won’t pay a premium for green products unless it’s food or skin care. Fourth, some old economy incumbents will adapt; others will die. But just about all of them will battle tooth and nail to preserve a world where carbon pollution is free of charge.

Q. Your book stresses the importance of leadership in forging a clean energy future. How should businesses lead on decarbonization while staying competitive?

A: Businesses no longer need to choose between profit and planet. It’s a matter of risk and reward—and there’s much greater risk in the dirty energy status quo. As more investors insist on sustainability, corporations that are slow to respond will face higher costs of capital, shareholder lawsuits, and depressed market value. As BlackRockBLK CEO Larry Fink says, climate risk is investment risk.

One role model par excellence is Walmart﻿. Along with establishing new standards for retail energy efficiency, they set a goal for zero emissions in their operations by 2040—without offsets. They also enlisted their international supply chain, which accounts for 90% of Walmart’s carbon footprint. In addition to shifting to renewable energy and eliminating waste, they’ve committed to protecting 50 million acres of land and a million square miles of ocean. While most organizations lack the resources of a Walmart, any company can find creative ways to help stem the tide of greenhouse gases.

Under Jeff Bezos, Amazon﻿ is also committed to carbon net zero by 2040, a wildly audacious goal for a company that delivers 10 billion items a year with planes and trucks. Since 2019, almost 200 companies have joined Amazon’s Climate Pledge for the same net zero goal.

My point is that the C-suite and shareholders have powerful roles to play in restoring our planet. According to the Guardian, just 100 companies account for 71% of global carbon emissions. Business decisions on sustainability can make a huge difference for the planet. In concert with activists, consumers, policymakers, and innovators, business can turn back the tide on climate change. We can indeed save the planet—but only if we act now, and together, and with requisite speed and scale.

I find it useful to track a metric Bill Gates calls “the green premium”: the added cost of a given product’s cleaner alternative. Given the plummeting cost of renewable energy, as well as the price of batteries, the green premium for many products will soon become a green discount.

This is the pivot point we need. Early adopters like being 'green,' but mainstream and widespread investment require policy and/or market forces. It's exciting that we seem to be approaching the point where the costs can do the heavy lifting

"My message is simple: Solving climate change is the greatest economic opportunity of our lifetimes and will create a net gain of 25 million jobs by the end of the decade."

Yes John, and your message is a recipe for failure. Curious: have you stopped to consider what the carbon impact of 25 million new jobs might be?

What a surprise: another venture capitalist suggesting consumption is not the cause,  but the solution to climate change. Next...