Greg Alvarez is Energy Innovation’s Deputy Director of Communications, where he executes campaigns that showcase EI’s work in traditional and digital media. Greg has worked in climate and clean...

This month's record-shattering offshore wind lease auction for six sites along New York’s coastline show the federal government is serious about achieving its own ambitious offshore wind goals. It’s the most lease areas the federal government has ever offered, potentially adding enough offshore wind to power 1.96 million homes. And total winning bids surpassing a record $4.3 billion – the previous record was $405 million in 2018 – show tremendous marketplace momentum to harness the resource. 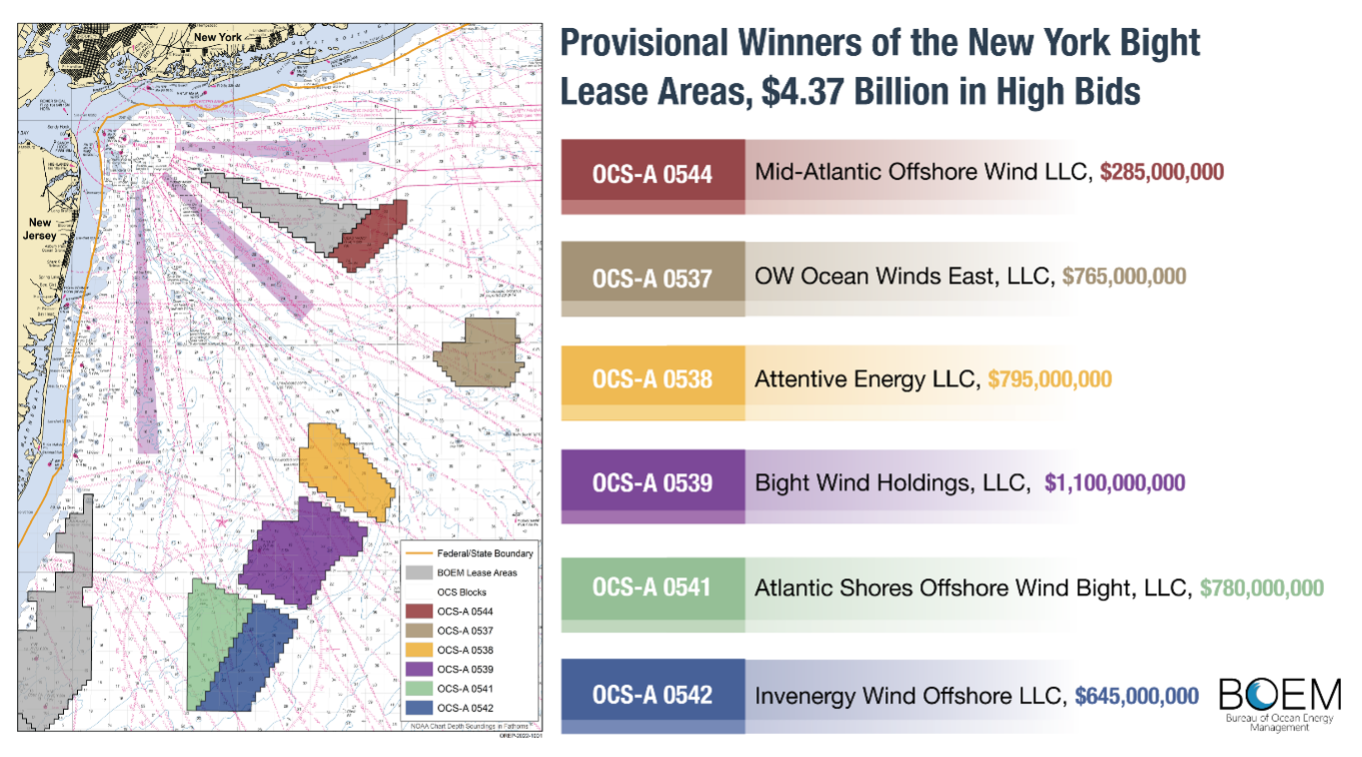 This creates a tantalizing scenario—the chance to build a new industry from scratch.

This new leasing round is an opportunity to compete in a global race to develop offshore wind. This kind of opportunity comes along once or twice in a generation, and seizing it could create immense benefits in America’s national interest — creating tens of thousands of new careers that didn’t previously exist, grasping a leadership mantle on the world stage, and changing the way we power our lives. But none of this can happen without smart policy choices.

United States’ offshore wind has developed in fits and starts, and while we lag behind much of Europe and Asia, our offshore wind resources are world-class. The gusts blowing off our shores have the technical potential to generate enough electricity to power the U.S. several times over, and every new project’s groundbreaking comes another step closer to harnessing them.

Hope surrounded the Block Island Wind Farm when it came online in 2016, followed by several exciting state-level policy wins and Department of Interior (DOI) lease auctions, but we have seen little tangible progress since then. However, the Biden administration has revived offshore wind momentum in several crucial ways: setting a target of 30 gigawatts of offshore wind by 2030, issuing the final permit for the Vineyard Wind project, and completing the New York Bight lease auction, the first in nearly four years.

This is welcome progress, as the administration simply cannot meet its climate and clean energy goals without developing our offshore wind resources. But offshore wind is more than an environmental story—it can help build a globally competitive 21st century clean energy economy. Today, with U.S. offshore wind in a nascent stage, many turbine components and vessels are still imported from Europe, although we can bring this activity to U.S. shores with a mature market and supportive policy.

However, we won’t reach offshore wind’s full potential, realize the totality of its benefits, or develop our resources fast enough to meet climate goals without thoughtful policies, even though offshore wind is becoming increasingly cost-competitive with substantial reliability benefits.

Those policies start with long-term extensions of clean energy tax credits, a centerpiece of the currently stalled Build Back Better Act (BBBA). The BBBA would extend tax credits available to offshore wind developers for 10 years, providing the long-term certainty necessary for projects that can take up to a decade to complete and require hundreds of millions of dollars of investment. Such a stable business environment would also facilitate investment in new offshore wind domestic manufacturing facilities. The BBBA’s credits are also designed as cash grants, maximizing their efficiency by eliminating unnecessary transaction costs and mitigating broader financial system risk.

Next, DOI’s Bureau of Ocean Energy Management (BOEM) needs to continue the positive steps it has taken over the past year, like issuing Vineyard Wind’s final permit. It should also hold additional lease auctions for the wind development areas identified off the coasts of the Carolinas, California, Oregon, and Maine. Speedy review and permitting will keep proposed projects from languishing for years, while auctioning new areas will tap into more of our offshore resources while adding hundreds of millions in new revenue to federal coffers.

Finally, new transmission lines are needed to bring wind-generated electricity ashore. Regional Transmission Operators should plan for offshore wind transmission, and such lines need prompt review and permitting processes. Coordination between BOEM, the Federal Energy Regulatory Commission, and East Coast states is necessary to create an offshore wind transmission backbone to service the region, which is designed for sustainable growth well beyond the 30 GW target. This backbone can speed permitting and interconnection while adding resilience and reliability to the grid as a whole. However, allocating the costs successfully across multiple states requires early, sustained stakeholder engagement.

We have a once-in-a-generation opportunity before us, and the future of our climate and economy depends on us seizing it. By implementing a few commonsense policies, we can harness the winds off our shores. It would be a shame to waste this chance.

Those policies start with long-term extensions of clean energy tax credits, a centerpiece of the currently stalled Build Back Better Act (BBBA). The BBBA would extend tax credits available to offshore wind developers for 10 years, providing the long-term certainty necessary for projects that can take up to a decade to complete and require hundreds of millions of dollars of investment.

How impactful would it be were these policies not to come into being? Is it just a matter of a stall or would it stifle all progress in this direction?