Our global experienced industry executive professionals, senior analysts and technology experts from across the electric, water, oil, natural gas and technology industries make us particularly qualified to assist clients with their most complex challenges 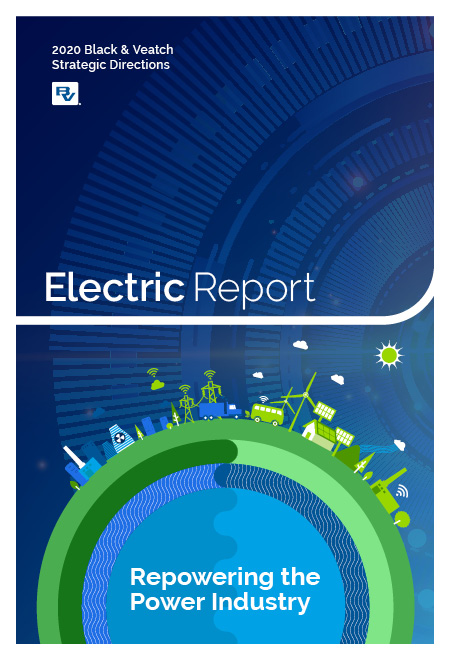 Dr. Romero is a Senior Managing Director of Black & Veatch Management Consulting. He specializes in the assessment of novel technologies, product design, product performance and reliability...

Experts on Demand is just one more way that our Black & Veatch Management Consulting professionals can support your strategic questions when you need them. With our track record of more than a century of solving the biggest problems, our Experts on Demand service offers live, targeted insights from our global network of professionals across a spectrum of infrastructure industry topics. The expert-to-expert business counseling gets managers and investors across corporate, financial and utility sectors in touch one of our experts in less than 24 hours in most situations. You can easily pick a meeting time here and schedule your first conversation, it’s really that easy.

Our new Electric Industry Strategic Directions reports showcases some of our globally-recognized management consulting experts on a wide range of topics including professionals such as Ralph Romero, a leading expert in renewable energy. Our latest edition of the Strategic Directions: Electric Report showcases leading experts and presents the survey results from more than 600 industry stakeholders who examine the complex issues and trends impacting today’s power infrastructure. Download this report and read what our experts have to say.

I have just read even the first paragraph of your report, and I am indeed looking forward to reading the rest. However, your initial first paragraph made me respond to you even right now, as you are biased in your setting a "trend" which is not there, for the rest of the report, which makes your entire report becoming something you may hold out at arms length and look at with a strong scrutinizing look:

"Backed by a survey of more than 600 power sector stakeholders, Black & Veatch’s 2020 Strategic Directions: Electric Report details an electric industry waging a sweeping transformation, much of it propelled by the rising tide of renewable and distributed energy and how to best integrate it into the grid."

So, Dear Mario Azar, we are many who are on the verge of producing big scale renewable energy, who do not have the slightest ideas about integrating ANY of these new renewable powers into ANY grid, whatsoever.

Grids causes losses ranging from 41% (the lowest reported) to 75% (the highest reported) and even beyond (with the new 80-kilometer-from-any-coastline wind turbine systems, based more on the common man's denial of having these wind turbine monsters in their gardens - which again is supported by the energy producers as they then are moving the wind turbines safely out of any prospect sudden demand coming up later, when the community due to raising prices wants the turbines connected directly in the local community).

On the backdrop of the enormous loss in the grid, and the market situation where flimsy causes sends energy pricing sky-rocketing not by 2-figured percentages but by 2-figured factors (!) up and down like a roller-coaster, a growing number of people do not want the grid.

So much more, as a large minority of even the US population ARE not connected to any grid, and as a huge minority of the African population (almost half the African population) are ALSO not connected to any grid - so why bother setting up grids, which are the reminescence of an old style energy thinking which emanated out of the 1970's oil industry, and the 1980 oil pricing crisis? What happened back then was that once fossil fuel energy had caught the better part of the market, it was natural to optimize the production cost by building larger scale factories, run 24/7, so that the profit maximized cost of the power plants could be utilized as well as possible. Prior to this gigantuous-ism of the industry, we still had factories, however, those ran during normal day time hours. No need for 24/7. The producers of the energy systems simply turned the screw of pricing to the point of pain, thereby forcing those who wanted to survive in almost any industry to increase the size of the industry.

The result was gigantic cement, paper, steel factories. There is no need that these factories are that big, however the then power structures supported this megalomania to grow.

What we see in the very first paragraph of this otherwise surely great report (which I am looking forward to read) is that the very start of it presumes that every player in the renewable energy industry (of which we are one of the emerging ones) will continue profit maximizing, and will be at all, interested in joining any grid.

Well. Surprise surprise - we are not.

We will be ABLE to supply our energy to a grid - and if the grid would want that, then let THEM bring their equipment, and if they behave well, we will let them connect. Otherwise, no. One of the problems with the grids are these forever synchronizations of the AC power to the right frequency with pilot frequencies and very very complex and again power-consuming / loss bringing technologies.

We are in cohort with well over 2 handful of other corporations who are sharing our view. And we will be storming forward over the next maybe 1 to 2 years, creating power plants in the size of homes up to small towns, for small industries etc. - and no - no grids to us.

We expect to deliver energy down in the range between USD 0.19 up to USD 2.38 per MWh. Not kiloWatt-Hours - per MegaWatt-hour. THis depends on location (insolation) and power per square meter. One may for instance be surprised to learn that for instance on the North Pole, we have one of the highest power levels on Earth.

But in short (now when it is too late..) - would you not agree that it is sick to put up renewable energy which can be harvested anywhere on Earth, only to squeeze the energy into a grid-network which eats 41% to 75% of the power produced (or more), while everyone can take down the energy they want, on location, anywhere on Earth - with less loss than 41% to 75% ??

When decrying that "2.2 billion people do not have access to power" - then one would also need to analyze how those people are living. SOME are indeed living in poverty, while others are not - they are just not on the grid. Then you may also analyze whether the addition of the grid to those empoverished would make the difference (to stop being poor) - and the answer is: NO. And one may ask if those who are not poor, and have no access to the grid - if they would benefit a lot from being on the grid (at the cost it would be to bring the grid to them, compared to putting up renewable energy at their place) - and the answer is: They'd be better off with an off-grid solar-energy.

One may also ask, if the current price of USD 37 per MWh for Photo Voltaic and USD 40 per MWh for land based Wind Turbines or USD 79 per MWh for off shore based Wind Turbines, is actually anything writing home about? Because - in the plugs for the common citizen of USA, they still do pay USD 110 per MWh (thereby proven that the loss in the grid is even the same, money wise - so there are apparently no subsidies either). So it is not.

So I will now read the remainder of the report - but - it was a very very revealing initial paragraph in your report.