On October 5, 2017, a network of advocates, companies, government agencies, utilities and others will join together to showcase the benefits of energy efficiency as part of the second annual national Energy Efficiency Day. Learn more about this event at http://www.energyefficiencyday.org/

AESP and Energy Central are excited to bring more public awareness to EE by joining in the collective effort to make Energy Efficiency and #EEDay2017 a national trending topic on October 5.

Here’s how you can participate, and stand to win a $200 gift basket filled with goodies, including a $100 Visa gift card, courtesy of AESP and Energy Central:

2. Tell us what you think the industry needs, to be more energy efficient:

3. Make sure that your posts contain these two hashtags #AESP_EEprofessional and #EEDay2017. There are no right or wrong answers, just tell us what you think as an EE insider. The winner is picked at random from all posts containing the above mentioned hashtags. Irrelevant, offensive or inappropriate posts are disqualified.

4. You can post as many times as you want; and each unique post will be considered as an entry. The more posts you make, the more chances you have to win.

5. On October 6, we will pick one winner at random to receive the $200 gift basket. Winner will be notified and announced on both Twitter and on AESP-Energy Central’s EE Community by October 9.

If you make your tweet/post before October 5, your post could be turned into a cool graphic and retweeted, and/or included in a compilation video to be unveiled on social media on EE Day, October 5.

As an #AESP-EEprofessional, I wish that there was no need for #EEDay because energy efficiency behaviours and culture was reflexive and ingrained! 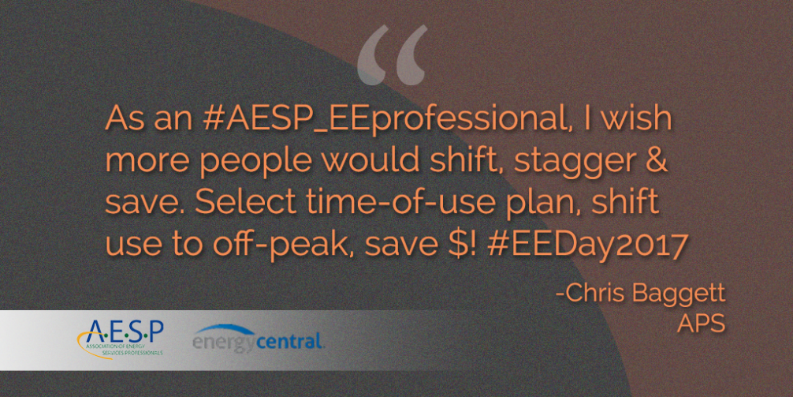 As an #AESP_EEprofessional, I wish that all the people of my country become energy conscious and environment friendly on #EEDay2017

As an #AESP_EEprofessional meter billing should reflect that NEC loads are based on volt-amperes (VA), rather than watts (W) on #EEDay2017

“As an #AESP_EEprofessional” I wish for a much faster, more mobile, more efficient, and more economical power source be developed for natural disasters such as the ones recently in the United States, Puerto Rico, and Mexico on this “#EEDay2017”.

"As an #AESP_EEprofessional " I wish everyone would use more natural light in there home to light the house conserving not only energy usage but reduction on bill. to impact on energy efficiency#EEDay2017"

How can we inculcate the habit of energy conservation and environment protection amongst the masses?

As an #AESP_EEprofessional, I wish utilities would offer new services and embrace clean energy technologies that encourage efficiency on #EEDay2017.

Thanks to all of you for sharing your wishes for #EEday2017.  We will be conducting the drawing today for the gift basket winner.  In the meantime come see our wrap up video at: http://www.energycentral.com/c/ee/thanks-all-eeday2017-wishes

Comment from our Facebook page - CFL bulbs are already out. LED bulbs are the cool bulbs now - no - literally. They don't get hot, and that's how they save so much energy. And you can get them at Costco for a very good price.