Robert Tucker is an energy industry professional with 25 years of experience working with utilities across the US. Robert has helped utilities with a wide range of business and technology...

How does a utility prove that its operational power system can safely increase system flexibility and resilience by incorporating distributed energy resources (DERs)? Are changes required to the operational behavior of control systems? Will controls and applications function properly if DERs are added to the network alongside traditional utility assets? Is it necessary to build a simulated test environment to figure this out?

To explore these questions, the Grid Modernization Laboratory Consortium’s (GMLC) Resilient Distribution System (RDS) project team aims to demonstrate a centralized and distributed control architecture by leveraging the Open Field Message Bus (OpenFMB) framework. As detailed in a previous SEPApower blog, the Pacific Northwest National Lab (PNNL)-lead project has demonstrated laboratory-based co-simulation, hardware-in-the-loop (HIL) evaluations, and the development of controls for use cases. Next, the project is testing utility operational concepts in an emulated environment, in preparation for field validation.

Project background
The GMLC is a strategic partnership between the U.S. Department of Energy (DOE) and the U.S. national laboratories to convene leading experts, technologies, and resources with the goal of modernizing the nation’s electric grid. This GMLC project focuses on developing a framework for the interoperability of field devices in both distributed and centralized control architectures. Through OpenFMB, utilities can achieve true integration of information technology (IT) and operational technology (OT) by enabling real-time distributed intelligence with increased operational decision making and analytics, at the grid edge. 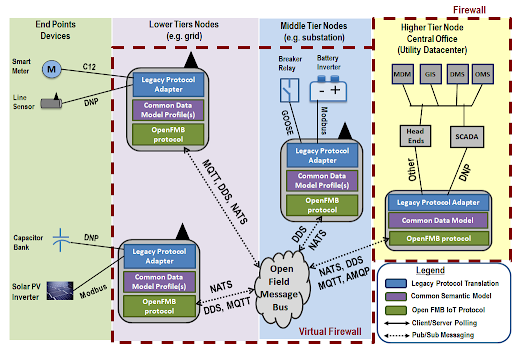 The OpenFMB architecture employs existing industry standards and technologies to securely and efficiently federate data at the grid edge. Ultimately, the GMLC RDS project seeks to accelerate the deployment of resilient and secure distribution concepts through the flexible operation of traditional utility assets (e.g. reclosers, voltage regulators, and cap-banks). These assets are controlled by SCADA with distributed edge devices (e.g. inverters, PMUs, and microgrids). Further, it will show that non-utility DERs do not interfere with the deployment of utility self-healing technologies. In fact, they can be an operational resource.

Testing control strategies in an operational system
The project team is using a multi-stage validation process to test these concepts in a live system: 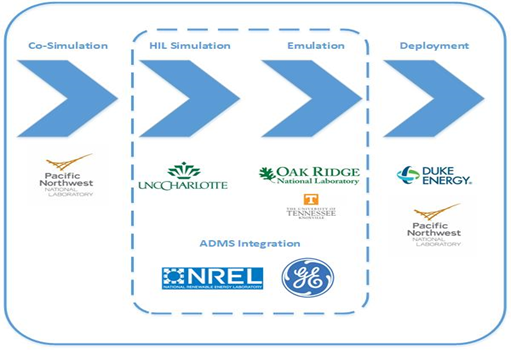 Moving to field validation
To prepare for the field validation, the team is conducting emulation testing. Since the integration of centralized and decentralized control schemes can result in conflicting control and optimization goals, the emulation testing will confirm a general methodology to integrate these disparate control architectures. The initial deployment will focus on operating fault location, isolation, and service restoration (FLISR) in a segmented scheme with high penetrations of DERs and microgrids.

To support the move to field validation, the team is using a test DMS from GE deployed at the National Renewable Energy Laboratory’s (NREL’s) advanced distribution management system (ADMS) test bed for grid modernization in Colorado. This test DMS is loaded with an extract of the connectivity model for the relevant Duke Energy circuits to establish a FLISR control model. In Tennessee, Oak Ridge National Lab (ORNL) has deployed the same commercial reclosers used in Duke Energy’s system, as well as an OpenFMB gateway developed by Open Energy Solutions and a Complete System-level Efficiency and Interoperable Solution for Microgrid Integrated Controls (CSEISMIC) microgrid controller. ORNL and NREL have established a direct communication channel between the laboratories to allow for federated testing of the two systems in near real-time. They are also emulating other Duke Energy network components along with DERs using VOLTTRON publish/subscribe protocols as part of the architecture (e.g., the OpenFMB Test Harness). 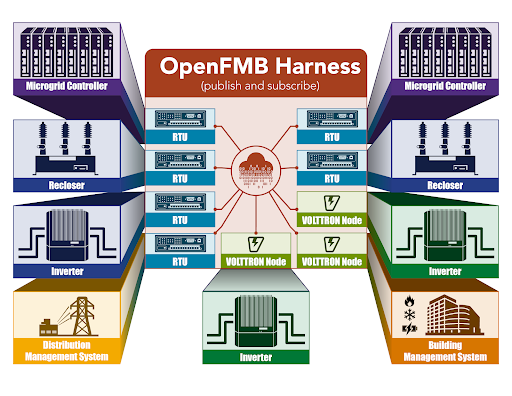 By leveraging resources already in place at the labs, the GMLC project team significantly de-risked the testing implementation and created a sandbox environment to demonstrate centralized and distributed control scenarios. NREL brought expertise in DMS systems and testing of control functions, while ORNL had expertise with emulating utility networks. As a result, much of the infrastructure and hardware components was available to support the necessary testing prior to field deployment and validation.

Conclusion and next steps
Using an emulated environment allows the GMLC RDS project team to demonstrate that distributed controls can be safely incorporated with traditional centralized controls to enable reliable utility operations across all device types. Their approach provides a safe test bed to validate control strategies and to prove project concepts before making expensive investments in field equipment and infrastructure. Emulation testing will also support testing the IAP scenarios and, if time allows, testing the transactive control schemes. (A future blog post will explore the transactive energy aspects of the GMLC RDS project.)

Once emulation testing is complete, the field demonstration of all IAP scenarios will be conducted on Duke Energy’s system. The team will also incorporate project goals and OpenFMB concepts in the field validation phase of the GMLC Citadels Project which just completed year one of its three-year project. The success of the field deployment and validation of increased resilience in these two GMLC projects will drive the adoption of OpenFMB on other circuits at Duke Energy and at other utilities.

The GMLC RDS project will be completed in September 2021. More information on the GMLC RDS project and its use of the OpenFMB framework will be made available throughout the year. SEPA will continue to share updates, findings, and lessons learned from this project. Stay up to date with SEPA via social media, upcoming webinars, and other articles.