We enable our clients to continuously improve their operational processes in competitive environments, optimizing their critical billing. We work with the energy industry to deliver flexibility, transparency & the power of industry leading solutions.

Deregulated electricity and natural gas markets in the US are under threat – more than at any time since the process started in California 22 years ago. The experience with deregulation has been mixed across the many states. However, the savings to customers have been substantial in many cases.

In a testimony by at the New York Public Service Commission hearings in September 2017, Direct Energy reported that savings of ESCO variable rates compared with the default utility rate from 2011 to 2016 were $18.1 billion[i].

Texas is a good example for understanding the pricing dynamics because there are regulated utilities and retail markets in adjacent areas. According to a study published by the Texas Coalition for Affordable Power, from 2007 through 2016, average residential prices in areas exempt from deregulation increased by nearly 6.1% compared to a decline of nearly 19.6% in the deregulated areas, saving customers billions of dollars[ii].

In Illinois, residential customers saved $37 billion in a 16-year period according to a report issued a coalition of business groups in March 2014[iii].

Despite this, regulators across the Northeast US are putting significant constraints on the retail markets to protect consumers from the risks of retail energy. What is an energy retailer to do?

Fortunately, the economics of renewable energy technologies have dramatically improved in the last ten years; and increasing the demand more renewable energy.  According to Bloomberg New Energy Finance (BNEF) the cost of wind power has dropped by 49% and solar by 85% since 2010, making them cheaper than new coal or gas plants in two-thirds of the world. Meanwhile, battery storage costs have dropped 85% [iv]. BNEF expects the world to generate half of its electricity from renewable sources by 2050.

A recent report from Lazard shows this dramatic decline[v] from 2009 to 2017. Since then, the cost of renewables has continued to fall.

Commercial and industrial customers have been largely spared by the regulatory overreach – regulators have been loath to interfere in contracts between commercial entities.

There are many new energy contract constructs that are gaining momentum across the country – in deregulated and regulated markets.  ‘Green’ power has upended the markets among the C&I customers. Power purchase agreements (PPAs)– physical or virtual – are pretty much standard parts of the new contracts and are being driven by corporate responsibility and sustainability goals.

Led by the U.S. companies, corporate power purchase agreements (PPAs) have soared across the world as the following graphs shows[vi],[vii]:

While regulators are considering additional retail energy consumer price protections, many of the states have created exemptions.  These now include:

Suppliers are experimenting with exotic offerings such as Micro Transactions and cryptocurrency. Since commercial style PPAs are cumbersome, it may be more beneficial to trade your solar generation and your battery storage via a microgrid with your neighbors when you are on vacation for a week rather than sell it back to the grid.  New apps on your Smartphone will enable these transactions. In the age of the sharing economy, retailers are finding innovative ways for consumers to participate in the renewable energy market without owning physical assets.

Energy efficiency improvements based on shared savings have been prevalent in the commercial world for a long time –savings on energy usage, or forecasting coincident system peaks to shave capacity obligation or 4CP Demand.  These services are finding their way to residential consumers, leveraging newer technologies and networks.

Thanks for the insights, Mona. Deregulation is often a political issue-- I know it's one being fought for here where I am in Florida. What do you think the outlook is for the next decade in U.S. utilities-- will we start to see more of a push towards deregulation, or will something like the challenges happening in California recently be enough to scare people off?

From Hansen Technologies: The Retail energy and Utility industry are evolving quickly with the adoption of digitalization and evolving technology such as distributed Renewable energy (solar, wind, battery), AMI, Smart Grid, Artificial Intelligence and IoT, to name a few. Energy Retailers and Utilities are both participating in these markets. As customer demand continues to grow for these new services, it will drive and change the energy markets. Perhaps that means the deregulation will expand as well; or that Retail Energy providers and Utilities will find new ways of working together to benefit the customers. At the end of the day, markets expand when customers see the benefits of new services.

At the end of the day, markets expand when customers see the benefits of new services.

That's definitely what it comes down to-- market responses (where regulations allow markets to respond)! Thanks for the reply, Mona

Yes, deregulation is a very political issue and getting more chaotic by the day. In the near term future, we believe that the landscape is going to change dramatically from the traditional deregulation we are used to, thanks to distributed generation, and decarbonization. Over the last 20 years of the process, the focus was primarily selling kilowatt hours with a variety of pricing mechanisms and incentives. That is probably going to go the way of phone calls being sold by price per minute. The new model involves a combination of energy, storage, distributed generation and demand management – and thanks to initiatives like community solar, even those states which are not deregulated are seeing a lot of activity (Minnesota and Wisconsin, for example). So, the market is undergoing a transformation, perhaps not in the way deregulation was originally contemplated.

"Despite this, regulators across the Northeast US are putting significant constraints on the retail markets to protect consumers from the risks of retail energy. What is an energy retailer to do?"

What are consumers to do when they're exposed to the risks of retail energy, Mona? The company providing your electricity is a monopoly - you have no choice when it comes to the wires attached to your home. Without strict regulation you will have no way to verify you're getting 100% renewable energy, or 1% renewable energy. You will have no way to verify you're being charged a "fair" price, because your utility will be setting whatever price they like. And their electricity? Take it or leave it.

Monopoly utilities were regulated 80 years ago for a reason, and when it comes to exploiting customers for profit, nothing has changed since then.

On behalf of Hansen Technologies:

The retail energy market can expose consumers to market pricing risks, and unfortunately there have been incidents where those risks were not properly disclosed or managed with consumers.  Those incidents cannot be tolerated in the energy markets as they undermine the credibility of the many reputable energy retailers who provide a great customer experiences.

Even though I am a fan of Milton Friedman, market regulation definitely has its place – in any market. It is the optimal combination of regulation and market forces that enable a robust industry. In the energy markets, we can see a wide variety of success and adoption of deregulation, as well as many examples of regulatory overreach, and in some cases just plain wrong (Ohio House Bills 6 and portions of 247). Regulatory policy should be seen as a dynamic system, and should be revisited often to ensure that it is keeping in line with the changes, especially in technology. Creating regulated monopolies is no guarantee of good behavior – as we are seeing in California right now.

"Even though I am a fan of Milton Friedman, market regulation definitely has its place – in any market."

I'm a fan of Milton Friedman too, Param, but you mischaracterize his legacy. Friedman was a strong believer in free market capitalism, which doesn't exist in any dynamic where the end (retail) customer does not have free choice. The idea utility electricity is a "market" is an illusion, a fabrication of energy producers who have no ability to offer (or interest in offering) choice to end consumers.

"we can see a wide variety of success and adoption of deregulation...."

Obviously, the industry sources and investment banks you cite will tell us everyone's bill is lower. But data from an impartial source, the U.S. Energy Information Administration, show that's not the case - that U.S. residential customer prices, adjusted for inflation, are 18% higher than they were 19 years ago. Is the electricity any more reliable than it was in 2001? Of course not - it's just more expensive. 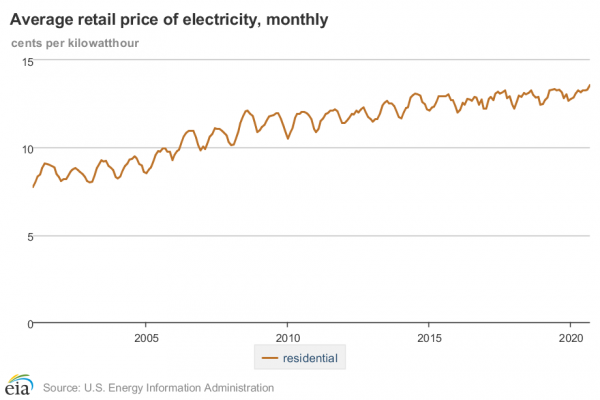 "...as well as many examples of regulatory overreach, and in some cases just plain wrong (Ohio House Bills 6 and portions of 247)."

I'm not familiar with 247, but  I will disagree strongly about HB6. Ohio's Renewable Portfolio Standard, for 11 years, had been an abject failure. After $billions spent by ratepayers on double-counted "Renewable Energy Certificates" and other handouts to wind and solar developers (in a state with little of either), the grid penetration of both together was less than 3% when Ohio legislators had had enough. They replaced Ohio's RPS with a Zero-Emission Credit, based on EPA's Social Cost of Carbon.

Because nuclear plants now qualified for it, however, solar and wind developers realized the intermittent, sporadic contribution of their electricity would be no match. Together with fossil fuel gas interests, they fought HB6 tooth and nail, labeling it a "nuclear bailout" and losing three court challenges, before accepting the fact they would have to compete on a level playing field - and couldn't.